It’s fair to say that Ajax’s start to the 2014/15 campaign has been indifferent. A record of won three, lost two is not what the natives of the nation’s capital are used to at this stage of the Eredivisie season. But that is exactly where Frank de Boer’s men find themselves after five games and another interesting transfer window writes Paul Gellard.

The season started well for the title holders. Comfortable wins over Vitesse (4-1) and AZ (3-1) had many feeling that Ajax could well be on an early course for a third straight championship. However, in Eindhoven, PSV were going quietly about their business in a similar fashion and arrived in Amsterdam with the Eredivisie’s form man, Memphis Depay.

Despite PSV’s attacking quality, it was Ajax who controlled the first half and took the lead through an early Anwar El Ghazi goal before capitulating after the break. Philip Cocu’s men soon took the initiative and dispatched the Amsterdammer’s thanks to goals by Depay, Narsingh and Jozefzoon, leaving Ajax fans in a state of shock.

The PSV defeat was then followed by a 2-0 loss against a plucky Groningen side in the north of Holland, meaning that Ajax had suffered back-to-back defeats. In the backdrop of the side’s dip in form was the departure of favourite son, Daley Blind, to Manchester United for a reported £13.8m. And this was offset by the arrival of Danish international, Niki Zimling, on a season-long loan from German club, Mainz 05.

So where to begin to explain for the current situation in Amsterdam? Firstly, the club surely needs to look at filling a problem area in the heart of the defence. Captain and Finnish international, Niklas Moisander, is being charged with holding together a young back four. The remaining first choice starts, going from left to right, are Nicolai Boilesen (22), Joël Veltman (22) and Ricardo van Rhijn (23). Add centre-half, Mike van der Hoorn (21), who started the first two games of the season, and it begins to look very inexperienced. Certainly, there will be those who point towards the international experience of Boilesen with Denmark and Veltman and van Rhijn with Oranje, but it’s clear that it’s asking a lot of Moisander to hold them all together.

The frailties were never more apparent than when bottom club, Heracles, visited the Amsterdam Arena this weekend. What looked like being a fairly routine win over a struggling side, slowly turned into a scrap to hang on for the final whistle. Wout Weghorst, the lanky Heracles striker, caused the Ajax defence all sorts of problems and even managed a late goal after van Rhijn was left to pick him up and was soundly beaten in the air.

Clearly the goalkeeping department is not a major issue for Ajax. Jasper Cillessen had a very productive World Cup with Oranje in Brazil, and he provides a solid last line of defence. His good form has also lead to the sale of the long-serving Kenneth Vermeer to bitter rivals Feyenoord, meaning that the management clearly has a lot of faith in its first choice custodian. 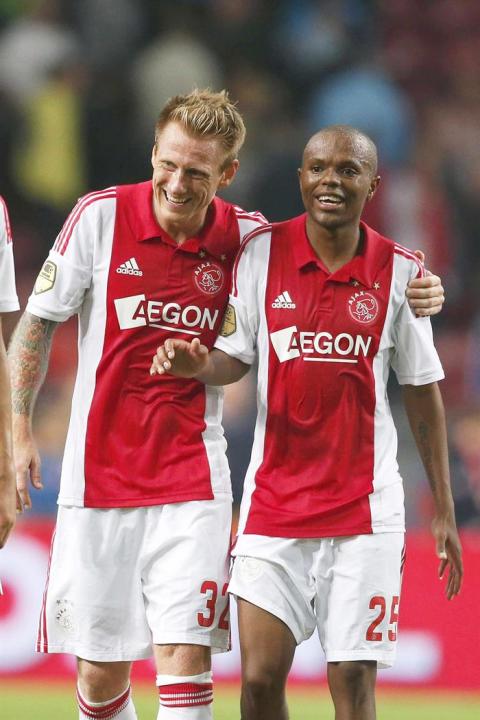 So what of the midfield? Without a doubt, Daley Blind is going to be a big loss to Ajax. The protection he afforded the back four was invaluable and one wonders whether the current defence are missing his presence. Zimling will doubtless be used to fill that gap once he finds his feet at his new club. He made his first appearance as a late substitute against Heracles this past weekend. Until then, it’s highly likely that Nick Viergever will fill the role, having joined from AZ Alkmaar for €2m. Elsewhere, Davy Klaassen has made a productive start to the season and the loyal Thulani Serero’s work rate will keep the midfield ticking over. Although, with the African Cup of Nations taking place in the winter 2015, Serero may well be missing for a long period should South Africa qualify.

Up front is where Frank de Boer will be spoilt for choice. There can be little doubt that the outstanding success so far this season has been right-winger, Anwar El Ghazi. The 19-year-old from Barendrecht has been hugely influential for Ajax and has found the net against PSV and AZ, having made his official debut against PEC Zwolle in the Johan Cruijff Shield at the beginning of August. However, he is not the finished product but will surely only get better. Indeed, Guus Hiddink may well look very closely at El Ghazi, who is also eligible to declare his international loyalty to Morocco.

Alongside the young El Ghazi, Lasse Schöne has also made a very productive start to the season, finding the net three times and providing a creative spark. He continues the long tradition at Ajax of signing creative Danish attacking players. Ricardo Kishna has also been tried wide right but is not likely to be more than a squad player based on current form. It may take something special to usurp the aforementioned El Ghazi.

But in the middle of the forward line is where Ajax now have quality of depth. Having begun the season with the Polish striker, Arkadiusz Milik, leading the attack, he very quickly made way for Kolbeinn Sigþórsson, who has struggled to replicate his form of last season so far. Milik broke his duck in only his second start, this weekend against Heracles. The on-loan Bayer Leverkusen man scored a brace and lead the line superbly, giving de Boer much to ponder going into Wednesday night’s Champions League visit of Paris St. Germain.

Sigþórsson certainly hasn’t failed to put in a shift in the games he’s started this season. His workrate continues unabated but one wonders whether the reported interest in him from Premier League side, Queens Park Rangers, has affected his form at all. With the likes of El Ghazi and Schöne providing the ammunition though, it surely can only be a matter of time before he rediscovers his scoring touch.

Add to the two more seasoned forwards, Richairo Živković, who was signed this summer from Groningen for €1.9m. The 18-year-old managed 11 goals in 37 games in his two seasons at the Euroborg but it remains to be seen whether he’ll see much playing time this season.

So in short, Ajax have work to do to catch up with early pace setters, PSV. The gap between the two sides was there for all to see in the second half at the Amsterdam Arena. Ajax look like a side playing with little confidence at present and it will be a huge test of Frank de Boer’s managerial skills to overcome that. The fact the club’s better players continue to move on to the more moneyed leagues of Europe doesn’t help either. But as long as the club continues to produce the El Ghazi’s of this world, added to reliable Danish finds and young Dutch talent, there is real cause for optimism within the ranks of the Ajax support.