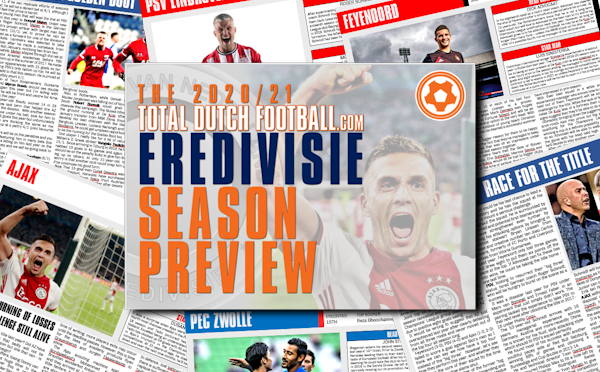 The new Eredivisie season is finally here and we have delivered an exclusive magazine to celebrate our return.

The publication is available to download now for FREE by clicking the button below. TotalDutchFootball.com has published the only online publication on the planet about the upcoming Eredivisie season.

All this and it’s FREE to download by clicking the button below.

Yes that is correct, we are back after five long years with our comprehensive Eredivisie Season Preview and it’s FREE!!!

We have produced an exclusive magazine to celebrate our return and the new Eredivisie season that begins on Saturday.

TotalDutchFootball.com is producing the only publication free to download about the upcoming Eredivisie season!

I’m excited, are you?

All this and it will yours FREE to download in PDF format tomorrow evening!

DUTCH FOOTBALL IS BACK!  The Dutch first division gets underway this Friday night as the twenty (…well 16) teams of the Eerste Divisie begin their journey vying for promotion to the Eredivisie writes Will Burns.

Henk de Jong’s SC Cambuur should run out as favourites to clinch promotion, when the season kicks off this Friday night.  In the cut-short 2019/20 campaign, the boys from Leeuwarden lead the division and much thanks to the goals of loanee Robert Muhren from Belgian outfit Zulte Waregem. One vital piece of business this summer was securing Muhren down for another season. If he can repeat his tremendous feat of scoring 26 goals last term in 29 games, Cambuur should produce a strong challenge for that top spot again.

However, to ease the burden on Muhren they have signed Maarten Pouwels from Go Ahead Eagles on a permanent basis.  The 21-year-old managed to score four times in 13 appearances for the Eagles last term, he should get plenty chances to outlast that figure this time round.  They have kept the majority of their core as midfielder Jamie Jacobs, defenders Doke Schmidt, Sven Nieuwpoort and Calvin Mac-Intosch, goalkeeper Sonny Stevens and wingers Jarchinio Antonio and Issa Kallon are still in Leeuwarden to help mount a serious challenge.

NAC Breda have strengthened during the break and look a sturdy contender for the ascension to the top league.  Experienced in the Eredivisie, Dion Malone and Thom Haye have joined on frees from ADO Den Haag.  Haye making last years’ loan move a permanent one, while Scottish youth international midfielder Lewis Fiorini has flown in from Manchester City.  The striking power of Finn Stokkers and Huseyin Dogan needs to improve.  They notched just 11 league goals last season, if Breda are to mount a serious challenge, they will need to find the net more consistently.

The Nijmegen side also lost Mike Tresor Ndayishimiye to Willem II and defenders Bas Kuipers and Josef Kvida to Go Ahead and Greek side Pafos FC respectively but the permanent capture of former Jong Ajax midfielder Jordy Bruijn from SC Heerenveen is a real coup for N.E.C.

Elsewhere, there is some debate who will wear the number one shirt following Hobie Verhulst’s move to AZ. Ex-Volendam keeper Mitchel Michaleis arrived to compete with 20-year-old Jay Gorter for the starting berth in-between the sticks. The playoff should be the target for van Wonderen’s side and a vital piece of the playoff puzzle will come from the goals of Frenchman Antonin Rabillard. The 24-year-old found the goal 11 times in 28 outings last season, and the Eagles will be hoping he builds on what was an impressive first season at the club.

Mike Snoei will lead De Graafschap into the new season with an abundance of new talent in his squad. After claiming fees for Leeroy Owusu (Willem II) and Branco van den Boomen (Toulouse), Snoei used the resources to bring in highly-rated goalkeeper Rody de Boer on loan from AZ and experienced midfielders Rick Dekker from PEC Zwolle and Johnatan Opoku from VVV.  They have retained the services of Ralf Seuntjens up top with Joey Konings joining him from Heracles in attack. Konings will look to revitalize his career after failing to nail down a permanent forward slot in Almelo.  Right-back Julian Lelieveld arrives from Vitesse on a free to benefit the options in defence.

With one of the youngest squads in the division, Wim Jonk’s FC Volendam may struggle to match their third-place last year, with minimal new blood injected into his team.  The former Dutch midfielder saw Francesco Antonucci return to the club after impressing last term. The 21-year-old Belgian playmaker was loaned in from AS Monaco last year but Feyenoord intervened in the summer to purchase the players and allowed Jonk to loan him back to Volendam for further playing time.  Scoring 11 times in only 20 appearances inspired Jonk to pull out all the stops to bring the midfielder back. However, losing left-back Gijs Smal to FC Twente was a blow and Jonk is yet to replace him.

Excelsior lost influential midfielder Rai Vloet to Heracles but coach Marinus Dijkhuizen will turn to new arrivals Reuven Niemeijer or Mitchell van Rooijen to fill the void.  Telstar were forced to part with top scorer Reda Kharchouch as his 20 goals in the last campaign saw him attract attention of Sparta Rotterdam. Big hopes will be placed on the shoulders of Haitian striker Richelor Sprangers to do the business in front of goal.

We are in for another interesting season in the Eerste Divisie, which fills our Friday nights with excitement and goals galore.  We will see more young talents emerging with Jong Ajax, Jong PSV, Jong AZ and Jong Utrecht, obviously unable to clinch promotion, looking to take points off the promotion hopefuls in the process.

Get ready for the new Eredivisie season with our FREE DOWNLOADABLE document.  The only comprehensive season preview available in English on the web… and it’s yours for free! COMING SOON!

We are back with another exclusive free downloadable magazine!!!  This time it is a huge forty-six pages full with team-by-team previews, squad lists, player profiles, ‘best elevens’, full transfer details, season betting tips and much, much more.

So what are you waiting for…?

CLICK ON DIRK KUYT TO DOWNLOAD and please remember to share this to all your pals so they are fully prepared for the exciting season ahead in Dutch football.

Thanks for reading and enjoy.