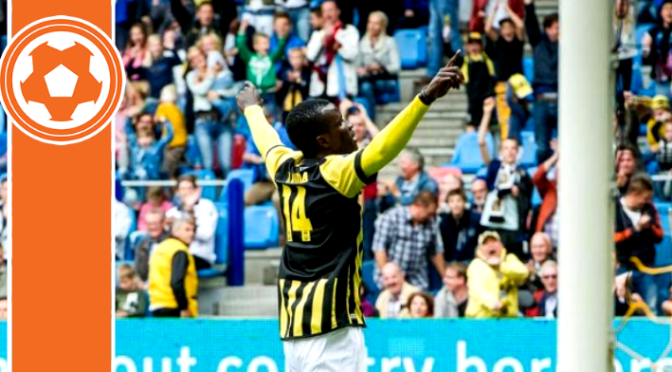 Welcome to week five of our Eredivisie Team of the Week which leads into our Eredivisie ‘Player of the Season’ competition.  All players have performed so well this weekend that Martijn Hilhorst and Will Burns have decided they should be in our team of the week.  Each player in the eleven receives one point and whichever player is declared ‘Player of the Week’, he receives an extra point.

ERIK CUMMINS (Go Ahead Eagles): Although the Eagles fell to a 2-1 defeat away to Twente, Cummins saved a spot-kick to give his side a lifeline, but his efforts were wasted as the outfielders failed to get a goal for a point.

KELVIN LEERDAM (Vitesse Arnhem): A great performance from Leerdam in Vitesse’s 3-1 win over Excelsior, maurading down the wing to cause trouble throughout.

ETIENNE REIJNEN (SC Cambuur): Solid display from the big central defender in which he created an assist in his side’s comfortable 3-0 win over Groningen.

JOOST BROERSE (PEC Zwolle): Made amends from a first-half handball to concede a penalty to hammer home a wonderful second half free-kick to help Zwolle defeat PSV 3-1.

BART VAN HINTUM (PEC Zwolle): Gave Santiago Arias no time at all to create any chances for Luuk de Jong and attacked the left wing well to help out the Zwolle attack.

ALBERT RUSNAK (SC Cambuur): The on-loan Manchester City man made his second ‘Team of the Week’ with a cracking performance against Groningen capped with a great goal.

JESUS MANUEL CORONA (FC Twente): A bit of a forgotten man in Enschede made everyone remember his name on Saturday with a wonderful goal, an assist and won a penalty in Twente’s win over Go Ahead Eagles.

JESPER DROST (PEC Zwolle): Played a great part in the 3-1 win over PSV with the equalising goal before half-time, although PSV keeper Jeroen Zoet should have done better with the shot.

ABIOLA DAUDA (Vitesse Arnhem): The Nigerian became our Player Of The Week after scoring a 25 minute hat-trick against Excelsior on Sunday afternoon – looking a snip at €500,000 in the summer from Red Star Belgrade.