There have been 3 weeks of action so far in the Premier League and it has been a mixed started for Dutch players. Daryl Janmaat has made a decent start to his Newcastle United career, making his debut in a 2-0 loss to Manchester City, a score line that is harsh on Newcastle as they played very well. He then scored against Crystal Palace in only his fourth game for the club. Some of the gloss was taken off his goal due to the fact that they conceded 3 to the early season strugglers. Robin van Persie on the other has made a very poor start to the season with Manchester United. He didn’t feature in their first game due to injury, but did play in the next two, both of which were disappointing draws away to Sunderland and Burnley respectively, and he was substituted in both. Other notable mentions include Ron Vlaar, who has helped his Aston Villa side to their best start in years, and Erik Pieters whose assist helped Stoke City gain a famous win away to Manchester City. 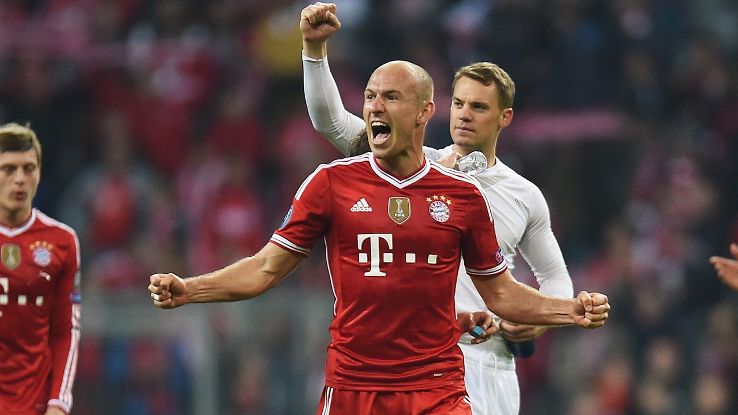 Only 2 weeks of action in the Bundesliga due to a later start date because of the World Cup. Arjen Robben has carried on where he left off both from last season and this summer’s World Cup; he scored the winner for Bayern in their opening game at home to Wolfsburg. Klaas Jan Huntelaar has also had a notable start to his season, he scored for FC Schalke against Hannover but they were unable to hold on to their lead and lost 2-1. Hertha Berlin’s new boy has fitted in well at his new club, with Beerens already getting an assist for Julian Schieber as he helped his side to 2-2 draw in their first game. Rafael van der Vaart has once again disappointed so far this season for Hamburg, his side faced the two new boys in their first two games but could only manage a 0-0 draw away to FC Köln and suffered a humiliating 3-0 defeat at home to relegation favourites SC Paderborn.

Serie A kicked off this past weekend and already Dutch players have had an impact. Napoli new boy Jonathan de Guzman scored the winner in the last minute of added time away to Genoa, whilst Lazio new boy Stefan de Vrij was booked in the 62nd minute and only a minute later gave away a penalty although he wasn’t sent off in the 3-1 defeat away to AC Milan. On the other side in that game Nigel de Jong who did what he does best in breaking up the play before distributing the ball to the forward players. Roma beat Fiorentina 2-0 but Strootman hasn’t yet recovered from his injury and their new signing from AC Milan, Urby Emanuelson, remained on the bench.

Best of the Rest

Bruno Martins Indi has already become a crucial part of FC Porto’s backline after €7.7 million move from Feyenoord. He has played in all 5 competitive games for the Portuguese side resulting in 5 wins, 3 in their domestic league and they won both legs of their 3rd round Champions League playoff against Lillehe to progress to the group stages. In Turkey both Dirk Kuyt of Fenerbaçhe and Wesley Sneijder of Galatasaray helped their team to opening day wins. Jeremain Lens hasn’t made a great start to his season in Kyiv with Dynamo; he has only started one game an looked set for a move to QPR of England before that fell through after the bid was rejected.