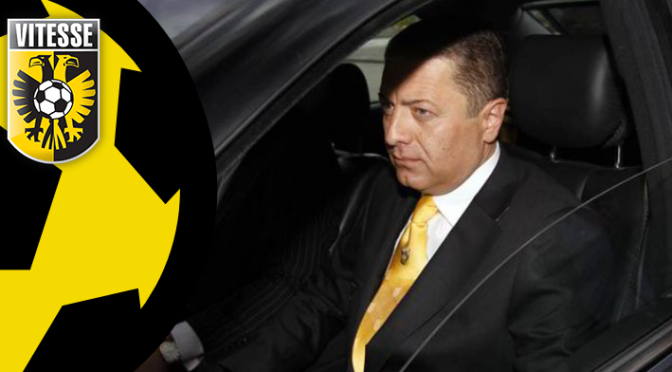 The zany but passionate former Vitesse owner Merab Jordania is planning to purchase the Arnhem-based club so he can close down their association with English Premier League giants Chelsea.

It is well known that Vitesse’s current owner Alexander Chigirinsky and Chelsea owner Roman Abramovich are good friends and business partners. The Russians both own large shares in Snegiri, a property development company in their homeland.

Since 2010, the London club has been regularly sending their young talent on loan to Arnhem. However, the relationship between the clubs is being investigated by the KNVB (Dutch FA) after Jordania accused Blues officials of instructing Vitesse not to try and win the Eredivisie. The reason being that UEFA regulations dictate that two clubs with a shared owner cannot enter the same European competition and Vitesse have fell from challenging for the league title in December, down to fourth in the Eredivisie standings.

The former Georgian player Jordania, lost power of Vitesse to Chigirinsky in October 2013 and last month, the ex-owner was been reported to the police and prohibited from attending their matches for three years after allegedly sending threats to chief executive Joost de Wit. Voetbal International has reported that the conflict between Jordania and De Wit had apparently been ongoing for some time now. According to Dutch journalist Richard van der Made, Jordania threatened to chop off De Wit’s fingers.

With this behaviour, Jordania is obviously popular with the Dutch media and has been controversial since becoming the first foreign businessman to buy an Eredivisie club. Jordania has now flapped his gums stating to Voetbal International that he is now forming a group of investors to help him take control of the Eredivisie club again: “Will I actually return? There are always discussions and if I find the right opportunity to return, I will certainly not let it pass.”

In a controversial statement, he accused that Chelsea signed of Dutch midfielder Marco van Ginkel for €9m last summer for a lot less than Bundesliga club Wolfsburg offered for the player as an example of their influence, stating:

Wolfsburg offered €15m for Van Ginkel but he went to Chelsea for six million less. It felt like giving him away.

The Georgian admitted that he is aiding the KNVB with their investigation: “They want to know exactly how it is. I see it as my job to tell you what’s going on at Vitesse.”

Meanwhile, Chelsea refuse to comment on Jordania’s claims but will be helping the KNVB fully with their inquiry. For Vitesse, Jordania’s comments puts a damper on the good season that manager Peter Bosz and the players have experienced on the pitch. Currently, four Chelsea starlets are over in Holland, with Christian Atsu, Lucas Piazón, Bertrand Traoré and Patrick van Aanholt excelling in the Eredivisie like others have in the past.