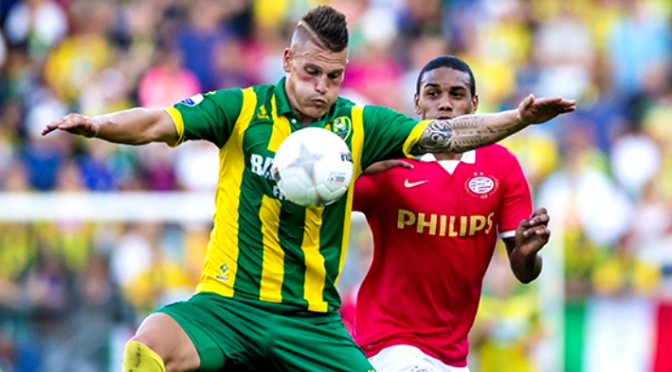 As usual in the Dutch top flight, it’s a case of goals, goals, goals on Saturday evening. Two games had five goals exchanged and Heerenveen vs. AZ Alkmaar had six, but as one extreme to the other, FC Twente and RKC Waalwijk failed to find a goal in their match.

The Cocu Revolution made a great start to their title challenge with a 3-2 away victory over ADO Den Haag. PSV took a 3-0 lead thanks to Georginio Wijnaldum, a Danny Holla own goal and Jetro Willems within the opening 35 minutes. However Holla pulled one back on the stroke of half-time for the home side and young striker Mike Van Duinen reduced the deficit deep into injury time.

Nineteen-year-old forward Jurgen Locadia had an excellent chance to score in the opening minute but was thwarted by goalkeeper Gino Coutinho. PSV ‘keeper Jeroen Zoet was called into action for the first time in the 11th minute as he palmed away a long-range effort from Jerson Cabral.

A minute later and the visitors took the lead, new signing Stijn Schaars played in Wijnaldum and the captain slotted home at the far post.

Wijnaldum came very close to doubling the lead on 17 minutes with young prodigy Memphis Depay setting up Wijnaldum, he first touch was sublime, but his shot was subpar as the ball crept agonisingly wide of the post.

ADO had their chances too, as Cabral fired an effort on target but had his shot nodded away by Jeffrey Bruma.

PSV extended their lead in the 27th minute through an unlucky own goal by Holla. The defender tried to clear a long ball from Wijnaldum, but his looping header beat Coutinho.

PSV did not let up, and a minute later, looked for a fourth and the left-wing menace Depay looked likely to score, as he cut into the box and rounded two defenders but he sent his shot wide.

PSV sat back to protect the third goal lead but as it invited ADO on to the attack, they found a goal before half-time. Danny Holla making amends for his mistake by firing Ninos Gouriye’s dangerous cross past Zoet.

Diciating the tempo, PSV slowed down the pace of the game, with the home side enjoying the bulk of possession. Chances went begging when Wijnaldum headed Zakaria Bakkali’s free-kick over the bar and Locadia just could not connect with Depay´s cross. While ADO striker Van Duinen headed well wide over the bar in the 68th minute.

Van Duinen handed Den Haag a lifeline in second-half stoppage time, capitalising on a defensive slip but PSV held on to take all three points.

FC Groningen also made a winning start to their campaign defeating NEC by four goals to one at the Goffertstadion on Saturday evening, a margin of goals that makes them top the table as of time of writing.

It was obvious last season that NEC could use some fresh blood in as coach Alex Pastoor stated at the start of the campaign that him aim was to guide the team the Europa League playoffs but in the last twelve games were only four points were collected, three of them against the relegated Willem II.

Groningen came flying out of the blocks and one of the new boys, Chery scored the opening goal after just ten minutes of play. Kalle Johnson, last season’s NEC third choice goalkeeper, was responsible for the goal. Filip Kostic’s shot from the edge of the area, changed direction, but the weak save from Johnson led Chery to grab his first goal for the club on his debut.

It was 2-0 on 27 minutes and again Chery was involved. He placed a through ball to Andraz Kirm and the Slovenian outwitted Johnson to double the lead.

The two goal advantage put the visitors in the driving seat with Navarone Foor replying for the hosts before the half-time whistle.

Howver, second-half strikes from David Texeira, on 54 minutes and a late Richairo Zivkovic goal put the result beyond doubt.

After losing top stars, Nader Chadli and Leroy Fer, FC Twente looked toothless and clueless in their opener against a RKC Waalwijk side which they should be quite capable of defeating. Instead it was a poor game and neither side could find a goal.

Even RKC has made some major changes in their playing staff, coach Erwin Koeman had to say goodbye to Jeroen Zoet, Cuco Martina, Henrico Drost, Guy Ramos and Ard van Peppen. Hardly any replacements of the calibre of the players that have departed have came in, and even after the Florian Jozefzoon’s transfer to PSV, there was not much money for new players.

The hosts did have their chances to win the match, especially through Willem Janssen and Luc Castaignos but the new RKC goalkeeper Jan Seda, had an excellent game and kept their best efforts out.

Heerenveen and AZ shared six goals in a high tempo match at a packed Abe Lenstra Stadion. Marco van Basten’s side showed that the administrative problems at the club have no impact on the performance on the field.

AZ had the best chance inside the first ten minutes when Swedish midfielder Viktor Elm found himself unmarked in the area and fired from close range straight at his compatriot Kristoffer Nordfeldt.

Heerenveen looked a different side to last year, with the high pressure and tenacity winning balls back deep into the opposition half. They grabbed the lead after 22 minutes when a penalty was awarded after a handball from Jan Wuytens inside the box. Icelandic hot shot Alfred Finnbogason made no mistake with the spot-kick, powering the shot into the right corner past Esteban Alvarado.

AZ were close to equalising minutes later but Nemanja Gudelj’s header from a corner clipped the crossbar and went over.

The visitors did grab the leveller, five minutes after the internal, with a tremendous solo effort from right-back Mattias Johansson. The Swede surged up the pitch with the ball stuck to his feet, played a lovely one-two inside the area with Aron Jóhannsson, and smashed it home.

Two minutes later, Van Anholt also got on the scoresheet as Heerenveen extended their lead to 3-1. The defender, who loves to get forward, arrived into the box as Finnbogason was doing some great play on the left of the area. The Icelandic squared the ball for Van Anholt to side-foot home with a neat finish.

The goals quietened down but the action did not, the hosts were reduced to ten-men after on-loan defender Mitchell Dijks was shown his marching orders for a strong but late challenge on Steven Berghuis. Luckily the striker was not seriously injured and continued the match.

AZ were given a chance to get back into the game when Rajiv van La Parra was deemed to have handle the ball in the area. The newly stated American international Jóhannsson converted perfectly hitting the inside of the left post on the way in.

The scoring had not been completed with the Van Basten’s boys when Van La Parra hit a superb curling effort from just outside the area to complete a 4-2 victory for Heerenveen.