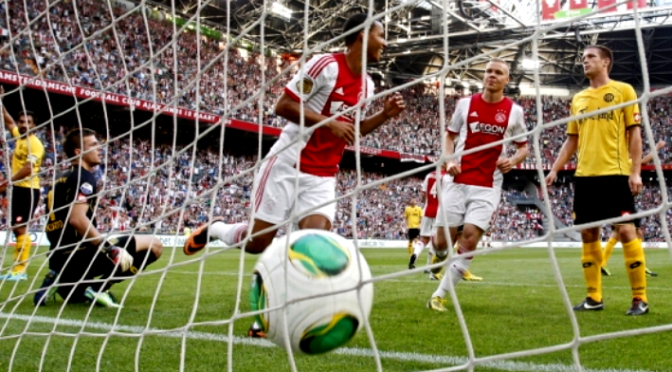 Friday night and champions Ajax started the crusade on the hunt for their fourth successive title with a 3-0 victory over relegation contenders Roda JC at the Amsterdam ArenA, even though they did have quite a bit of luck.

In an exciting beginning to the game, Ajax burst out the blocks much to delight of the Amsterdam crowd, and Frank de Boer’s side were nearly a goal ahead inside the first seven minutes. Danish playmaker Christian Eriksen crashed a free-kick on the edge of the box onto the crossbar of Filip Kurto’s goal, but a few minutes after that, the hosts were ahead.

Another free-kick, but this time Eriksen whipped the ball in from the left-hand side that deceived everyone in the box. Kurto used his reflexes to divert the ball with his foot, but the ball rebounded off full-back Ricardo Van Rhijn’s shins and into the goal. An unfortunate goal for Roda to concede.

Ajax dominated and captain Siem de Jong doubled the lead on 31 minutes. Again, the Dane Eriksen was involved, he placed an ideal through ball with found De Jong inside the box, who kept his composure to coolly slot the ball home.

With the trio of De Jong, Viktor Fischer and debutant Bojan as Ajax’s attacking threat, Roda failed to find much of the ball out of their own half and Ajax should have put the game to bed. Bojan had a genuine claim for a spotkick at the start of the second-half when he found his way into the box only to be clearly fouled by Ard van Peppen, but the referee waved away his appeals.

On the hour mark, as Ajax tired, Roda began to see a lot more of the ball and were close to getting back into it when winger Guus Hupperts placed a shot onto the post.

On 70 minutes, Daley Blind was caught pulling on Krisztián Németh’s shirt and referee Danny Makkelie pointed to the spot. The away supporters were on their feet in delight but Wiljan Pluim blazed the resulting kick over Kenneth Vermeer’s crossbar. It is extraordinary that Pluim’s effort is now the fifth consecutive penalty that has been missed by opponents of Ajax.

The icing on the cake was on 83 minutes when Ajax cemented the points with their third goal. The new number 7 for the Amsterdammers, Viktor Fischer with a deft chip after Lasse Schone had forced Kurto into yet another save and De Jong hit the post with the rebound.

Ajax win and sit top of the league, while Roda JC linger at the bottom and regret the penalty miss that could have possibly changed the scoreline.