It was a hot summer’s day today in the Eredivisie, with water breaks introduced by the league halfway through each half. The action did not cool down either so please feel free to take a break yourself half way through the review.

Sunday’s games kicked off with one of the Eredivisie new boys as Cambuur stepped into the Dutch top flight for the first time for thirteen years, and were roared on by a lively crowd inside the Cambuur Stadion. After an even first-half, the home side came out the better side, in according to the pundits, a battle of the two relegation contenders.

Dwight Lodeweges will be proud of his side’s performance and how they held their own against NAC Breda. None of the eleven players selected have scored at the highest level. Jody Lukoki, on loan from champions Ajax, appeared as a half-time substitute and looked the most likely to make things happen, but the goal did not materialise.

After an embarrassing exit from the Europa League in midweek against Luxembourgian side FC Differdange 03, FC Utrecht had to shrug the disappointment off and pull their socks up to entertain the newly promoted Go Ahead Eagles.

On a baking hot day in Utrecht, Jan Wouters side did look to have put the defeat behind them as they dominated the first-half proceedings and found a breakthrough in the 15th minute. Australian midfielder Tommy Oar crossed in from a right-wing free-kick and Dave Bulthuis rose above everyone to nod his team ahead.

Utrecht pressed for a second as Japanese playmaker Yoshiaki Takagi was pulling the strings for Jens Toornstra and Jacob Mulenga but Go Ahead keeper Eloy Room kept the danger men at bay.

The game became a tale of two halves with the new boys dominating the second half and drew level within a minute of the restart. Xander Houtkoop, who scored sixteen goals last year in Eerste Divisie, bursted forward down the left and smashed the finish past Robbin Ruiter.

The disgruntled home crowd got on their teams’ back as Go Ahead smelt blood and went for the kill. Unfortunately the goal never arrived for them and it was mainly due to the fact Ruiter was in the Utrecht goal. Ruiter was pulling out stops from Marnix Kolder, Jarchinio Antonia and Houtkoop.

The draw look to be on the cards until we reached added time at the end of the ninety. Jop van der Linden struck the post with an excellent free-kick two minutes into stoppage time.

The boos rang out at full-time inside the Stadion Galgenwaard, Wouters will be beginning to feel the pressure even inside the opening game of the season.

New Vitesse coach Peter Bosz faced his old side Heracles Almelo and although he lost his two major stars in Wilfried Bony and Marco van Ginkel in the summer, his side performed well and gained a great 3-1 victory.

In a lovely sign of respect, the away displayed the banner shown below to appreciate what Bosz and his assistant Hendrie Kruzen had done for Heracles under their leadership. 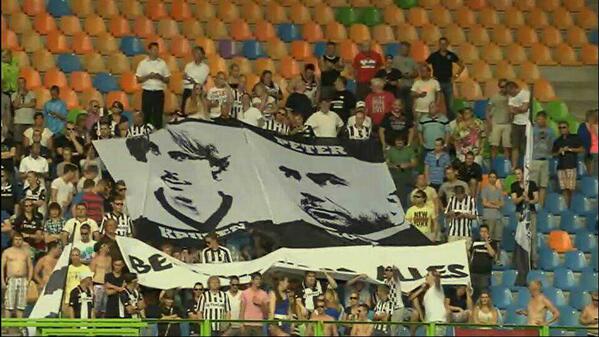 Vitesse debutant Kelvin Leerdam, on his first start for the club since his move from Feyenoord, grabbed the lead for his new side on 26 minutes when he deflected Theo Janssen’s shot past Remko Pasveer in the Heracles goal.

The lead was doubled four minutes later as the tricky Georgian left-winger Valeri Kazaishvili cut inside and surged forward, before floating over a cross towards forward Marcus Pedersen. The Norwegian returning to the club after a loan spell at Danish side Odense, guided the ball into the net.

After the interval, Bosz’s side continued to control the match, but they had to wait until ten minutes remaining to extend the lead further. Ecuadorian wide man Renato Ibarra sprinted into the area before firing a rocket for the third.

Vitesse should have had a fourth on 84 minutes but substitute striker Mike Havenaar shockingly misfired and the empty goal, stayed empty as the ball ballooned over the crossbar.

Heading into stoppage time, Heracles got a consolation, with debutant Matthew Amoah taking full advantage of Leerdam’s misplaced back pass.

An excepted win for Vitesse and striker Pedersen will look to provide the goals to fire them up the league as a replacement for last year’s league top scorer Bony.

Ron Jans made a dream start to the season on his return to Zwolle clinching a deserved 2-1 win over Ronald Koeman’s Feyenoord. His side turned in a nightmare performance and two Zwolle players especially came back to haunt Koeman.

Zwolle finished in a very creditable 11th place in their first year back in the top flight of Dutch football last year and their results in pre-season have been excellent. Former Heerenveen boss Jans has led his new club to five friendly victories out of five and that includes a 3-2 win over Werder Bremen and a 5-1 hammering of Ross County last time.

Striker Fred Benson and Kamohelo Mokotjo, the latter signed on a free from Feyenoord this summer, were a thorn in the side to Stefan De Vrij and Bruno Martins Indi in the centre of the Rotterdam defence.

The IJsseldelta Stadion crowd were loud throughout but they nearly broke the decibel record in Zwolle on 66 minutes. Highly-rated 20-year-old midfielder Jesper Drost delivered a perfect cross for Mateusz Klich to head past Erwin Mulder to give Zwolle the lead and send the spectators into rapture.

It was what Zwolle deserved, but Feyenoord equalised five minutes later, which displayed some poor defending by the home side. Defender De Vrij was all alone of the edge of the area and volleyed a shot towards goal, it was going wide so Ruben Schaken nodded it on target into the goal to level the game up.

Zwolle kept their heads up and substitute Guyon Fernandez, on-loan from Feyenoord, popped up with a goal deep into injury time to send his parent club away with nothing.

Koeman has two problems, clearly visible after the first ninety minutes of the campaign. His team is too reliant on Italian target man Graziano Pelle (who had a poor game today), and Feyenoord are already three points behind title rivals Ajax and PSV after just one round of matches. Feyenoord finished in third place last time and it’s now 14 years since they last won the Eredivisie title, so they better improve quickly or their fans could be feeling the disappointment for a 15th year in a row.