Ten years after leaving for Feyenoord, 36-year-old Anthony Lurling has returned to Heerenveen on a deal until the end of the season.

Lurling has already stated that even at the age of 36, he wants to impress and win a longer contract at the Friesland club.

The striker, who will be 37 in April, arrives from NAC Breda where he has spent the last seven seasons, making 190 appearances scoring 33 goals.

Lurling had plenty of offers but chose Heerenveen out of them all: “When I was allowed to leave Köln eight years ago, the telephone hardly rang. Now I’m 36 and when NAC said I was allowed to leave, the phone has been ringing off the hook with Eredivisie and Eerste Divisie teams interested and also Belgian clubs.”.

Heerenveen’s director of football, Hans Vonk is delighted with the Lurling capture and looks to him nurture the young talent at the club: “Anthony is an experienced player who can play in many positions. We have a talented, but young team that could really do with the support of an experienced player like Anthony. Also, with Anthony knowing the club, this is a huge advantage which will make the transition that much easier.”

The move from NAC was arranged, after this past week, Lurling clashed with Breda manager Nebojša Gudelj after the coach has failed to select the player since the 1-0 win over Cambuur on December 21st 2013.

John is currently plying his trade in Portugal with Benfica, but is struggling to find a first team place and he has only featured in ten games so far this season in the Primeira Liga.

AD report that the two clubs have come to an agreement regarding the six-month loan deal, and John should arrive in Amsterdam until the end of the Eredivisie season.

John last played in Holland in 2012 with FC Twente, scoring nine goals in 46 games, before clinching a €9m move to Portugal in May that year. The Dutchman has netted just five times for the Portuguese giants in 59 appearances.

Frank de Boer’s Ajax side are set to compete in Turkey this weekend against Celtic, Galatasaray and Trabzonspor in the Antalya Cup friendly tournament. 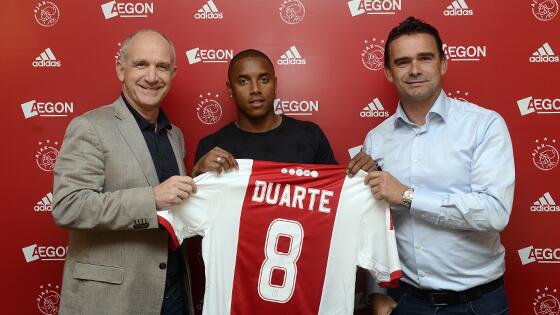 DONE DEAL – 23:59 – Ajax defensive midfielder Ilan Boccara has joined Ligue 1 side Evian on loan until May.

AJAX DONE – 19:17 – Sporting director Marc Overmars talking to Mike Verweij states there will be no more business from Ajax tonight. Eljero Elia‘s proposed move fell through as Werder Bremen insisted on permanent sale, with Ajax only wanting to take the player on loan with option to buy.

DONE DEAL – 18:56 – Feyenoord defender Matthew Steenvoorden, 20, will spend the rest of the season on loan at FC Dordrecht.

DONE DEAL – 18:41 – Lucas Woudenberg leaves Feyenoord to join Excelsior Rotterdam for the remainder of the season on loan.

DONE DEAL – 17:25 – Ajax clinch the signature of midfielder Lerin Duarte from Heracles Almelo for an undisclosed fee. Duarte had been rumoured all summer long as a replacement for the outgoing Christian Eriksen. The Jong Oranje player signs a four-year contract

DONE DEAL – 15:35 – German midfielder Simon Cziommer, 32, has signed for Heracles on a free transfer after being released from Vitesse Arnhem at the end of last season.

DONE DEAL – 13:00 – NEC Nijmegen, without a win this season have strengthened by signing three new members to the squad. Belgian right-back, Marnick Vermijl, 21, arrives on a season-long loan. Austrian striker Jakob Jantscher joins from Red Bull Salzburg on a permanent two-year deal and 21-year-old Samuel Štefánik comes from Trencin, where he scored twenty times in 96 games. The Slovakian midfielder has signed for three seasons.

DONE DEAL – 09:00 – 19-year-old right-back Kevin Gomez has left Feyenoord to join Stoke City on a two-year-deal for an undisclosed fee.

With the clumsy Sander Boschker in the dog house and first choice keeper Nikolai Mihaylov rumoured to be on his way, FC Twente have made their second signing of the summer a goalkeeper.

Sonny Stevens, 21 next month, has signed a four year deal with the Enschede club from Eerste Divisie side FC Volendam with an option to add another year.

The 6ft 4inch tall stopper made 42 appearances for Volendam since making his debut on 21st September 2010 in a KNVB Beker match at HVV Hollandia.

Since the departure of now FC Utrecht goalkeeper Robbin Ruiter from Volendam, Stevens became first choice. Volendam made a good go at promotion this year falling at the last hurdle in the playoffs against Go Ahead Eagles next week.

Current first choice, Bulgarian ‘keeper Mihaylov has been linked with Premier League side Fulham and with Boschker making disastrous mistakes as of late, Stevens may find himself receiving the number one shirt at Twente, sooner rather than later.

With another season over and yet another season without trophies, PSV have gotten a lot of criticism lately. They spent loads of money on new players (mostly midfielders and attackers) over the last few seasons, which made them big favourites at the start of the season. Having scored an astonishing 103 goals in 34 matches, the attacking strikeforce seems very good, but due to 43 goals conceded, they eventually lost the title to Ajax, who claimed their third consecutive title. Fans have voiced their concerns about the transfer policy of the club. PSV should invest more in their leaky defense and give youth more chance in their opinion.

So, after head coach Advocaat announced that he would leave the club at the end of the season, PSV promoted assistant manager Phillip Cocu to the head coach role. In the presentation of their long-term plans, Cocu and Brands mentioned both investing in defense and youth as the new priorities for next season.

Over the last weeks, many articles about possible transfer targets for PSV popped up in Dutch media, with most of them confirmed by PSV staff. We made a list of potential signings and also included a list of players that will or might leave the club during the next transfer window.

Boy Waterman: Has been PSV’s first choice goalkeeper for most of the season, but was criticised by many fans. Contract expires this summer and according to VI, Cocu wants to let him go in order to give youth goalkeepers Jeroen Zoet and Nigel Bertrams a chance to compete with Tyton.

Wilfred Bouma: Senior defender in his second term for PSV. Played a few matches last year but was considered to slow for PSV’s defence. Today, new head coach Cocu has told Bouma that there will be no space for him in next year’s squad, so Bouma will have to make place when his contract expires this summer.

Marcelo: If anything has been made clear this season once more, it is the fact that PSV’s defence was once more incapable of making a strong impression. Among fans, Marcelo is the main victim of criticism. Made some fatal mistakes. Thijs Slegers, Voetbal International’s PSV watcher, announced a few days ago that Bundesliga side Werder Bremen appear to be interested in buying the 25-year old Brazilian defender. No formal approach has come in though, according to PSV technical director Marcel Brands.

Stanislav Manolev: Was loaned out to Fulham in January, and has told Dutch media that he is hoping for Fulham to activate the buyout clause in his contract.

Atiba Hutchinson: Player with the most appearances for PSV this season. Naturally a central midfielder, but switched to right back after Stanislav Manolev went on loan to Fulham in January. Earlier (in December 2012), 30-year old Hutchinson announced that he would not renew his expiring contract in order to be able to have one last adventure.

Orlando Engelaar: PSV already tried to get rid of him at the beginning of this season. Very expensive player wage-wise and mostly benched or in the reserves. His contract expires this seasons and PSV have announced not to renew his deal.

Mark van Bommel: Played a key role in PSV’s season. The 36-year old legend returned at the beginning of the season to play for PSV one last time. Despite recent attempts by PSV fans to get him to stay he announced his retirement at the end of the season.

Kevin Strootman: This 23-year old midfielder has once more had a very strong season alongside Van Bommel. With his performance, loads of clubs, including Manchester United, are interested in aquiring the services of the Dutchman.

Jeremain Lens: Had a good season as he scored 15 and gave 10 assists, but has been very open about his ambitions. He has already expressed his desire to play in the Bundesliga or Premier League several times.

Jeroen Zoet (RKC Waalwijk): This young goalkeeper will return from two seasons on loan at RKC and is looking to compete for first goalkeeper with Tyton, after having had a good season in Waalwijk.

Mike van der Hoorn (FC Utrecht): 20-year old defender who has impressed this season for his current club FC Utrecht, with his team conceding 41 goals (less than PSV!). According to Dutch newspaper De Telegraaf, PSV technical director Marcel Brands has already approached Mike informally if he would be interested in joining PSV.

Virgil van Dijk (FC Groningen): Another defender who has played a very solid season for his club, leading to interest from clubs in- and outside of the Netherlands. Marcel Brands was spotted in Groningen on the last day of the season as Groningen lost 0-2 to Ajax to check out the young defender.

Santiago Arias (Sporting Lisbon): Highly-rated young right-back from Sporting Lisbon. Has been a transfer target this whole season, but with both Manolev and Hutchinson expected to leave, a right back is now top priority.

Karim Rekik (Manchester City, loan): Dutch central defender currently playing for Manchester City. Played only one match for City this season, and isn’t expected to play much next season either. As reported by Thijs Slegers (Voetbal International), PSV might try to bring him to Eindhoven on a temporary deal.

Luis Felipe Ramos (Ituano): This young (16-year old!) Brazilian defender is currently on trial with PSV. If he turns out to be good enough for PSV, he can be brought in instantly as he appears to be able to get a European passport.

Defensive midfielder Kamohelo Mokotjo has signed a three-year deal with PEC Zwolle on a free transfer from Feyenoord. He is the first summer acquisition for Zwolle and the transfer will be made official on July 1st when the European Transfer Window opens.

The 22-year-old South African previously played for SuperSport United in his homeland before moving to the Netherlands in 2008 where he signed with Feyenoord, who subsquently loaned him to feeder club Excelsior.

Mokotjo states he is delighted with his move to Zwolle. “I was ready for a new challenge and I am happy with this opportunity.

“A few weeks ago the club showed some interest in me and after an initial discussion with Zwolle coach Ron Jans and technical director Gerard Nijkamp, I was positive that something good would happen.

“This season Zwolle have done well in all competitions. They also have a great stadium, a good vibe and big crowds that I can’t wait to play in front of,” he tells PECZwolle.nl

Nijkamp says he is pleased with their acquisition. “For PEC Zwolle, Kamohelo Mokotjo is a real asset. He is the type of player that we do not have. He creates the perfect balance in midfield and creates space. We are very happy that it has worked out as we have wanted this player for a long time,” he adds.