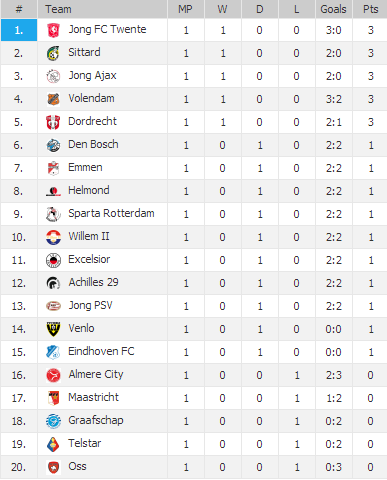 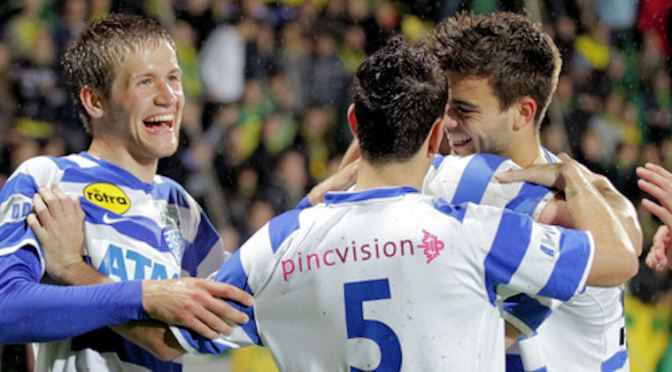 Go Ahead Eagles wins 6-3 on agg

It took Go Ahead Eagles 76 minutes to break the deadlock in their second leg against FC Dordrecht on Saturday evening. They ran out 3-0 winners and play VVV Venlo on Thursday in the next round of the promotion/relegation playoffs.

A Cas Peters strike and two goals from Quincy Promes decided the match and tie for Deventer side, both players are on-loan from FC Twente.

A torrential rain filled night in Sittard finished Fortuna’s hopes of reaching the top flight for the first time since 2002. De Graafschap now need to get past Roda JC in the two-legged affair beginning on Thursday as they attempt to go back to the Eredivisie at the first time of asking.

Fortuna were without coach Wil Boessen who was serving a suspension after being sent to the stands in the last game.

The first goal came after half-time from a corner and big defender Timothy van der Meulen outmuscled his marker and powered a header home.

The tie was killed off just past the hour after some great work from Adil Auassar ended with a great cross to big Polish target man Piotr Parzyszek to head home for 2-0.

Aziz Khalouta gave Fortuna a bit of hope in the 75th minute pouncing a long ball and finishing past Joost Terol  in goal.

The final nail in Fortuna’s coffin was a fortunate goal from Anco Jansen with only five minutes remaining.  A cross-cum-shot that floated over the head of goalkeeper Ferhat Kaya in goal to cement the 3-1 victory and the second round place.

Dordrecht and Go Ahead Eagles shared six goals on Wednesday night in a lively game with some great goals.

Lars Veldwijk grabbed two goals for the hosts and the first came after 21 minutes. The energetic Jeffrey Rijsdijk provided the assist. Four minutes later and the visitors were level, Freek Heerkens scoring on 25 minutes.

Go Ahead found themselves a goal down again in the 40th minute and this time a man down. Bart Vriends conceded a penalty whom Veldwijk smashed down the middle for his second of the game, the defender was given his marching orders from referee Richard Liesveld.

But again, Dordrecht were not ahead for long. Two minutes into first-half injury time, Turkish Under-19 international Deniz Türüç curled a free-kick perfectly past a stranded Warner Hahn in the home goal.

Dordrecht showed aggression in the second half as they searched for a third goal but a blunder from Hahn let Go Ahead take the lead against the run of play. Failing to collect the ball on the edge of the box, Hahn lost out to Türüç. The young Turk was smart and instead of shooting, crossed the ball towards the back post.  He had spotted the arriving Xander Houtkoop and the winger placed his head onto the ball into the empty net.

It took the home side until ten minutes from time to find an equaliser, and it came from Cape Verde international defender Josimar Lima. A floating free-kick sent into the penalty area by Rijsdijk, and Lima rose above everyone to head into the corner of the net to clinch the draw.

The winner over two legs faces VVV Venlo in the second round.

Two headed goals from soaring Polish striker Piotr Parzyszek provides De Graafschap a great chance of meeting Roda JC in the second round of the playoffs, despite a 80th minute consolation goal from Fortuna’s Niels Vets.

Target man Parzysek, 6ft 3inches, got on the end of a pair Tim Vincken’s crosses for Peter Huistra’s men but Belgian defender Vets gave Fortuna Sittard a salvation in this two-legged affair.