On Friday evening the most unlikely result of the Eerste Divisie season so far was witnessed as 19th place FC Oss handed 15th place FC Emmen an unbelievable EIGHT-nil pasting writes Will Burns.

The relegation threatened FC Oss have been improving in recent weeks but no-one expected a score like the one we saw on Friday evening. Dennis Janssen opened the scoring after a quarter of an hour before Jonathan Opuku and Lorenzo Pique added to the tally before half-time. Janssen added his second, while Marko Maletic netted early in the second half. Ryan Sansai and Guyon Phillips added to the rout before Maletic grabbed his brace to send Emmen home with their tails between their legs.

FC Dordrecht grabbed top spot after a great 2-0 away win against title rivals VVV Venlo on Friday night. Paul Gladon gave the visitors the lead in the first half before Giovanni Korte added a second in second half stoppage time. VVV’s chances of getting back in the game were hampered by defender Jeffrey Altheer receiving a red card midway through the second half. Venlo are now third, seven points away from Willem II in second.

Promotion hopefuls Willem II sit in second after Jong PSV hit two late goals to pinch a 2-2 draw on Monday night. Ruud Boymans scored his 20th of the season and Terell Ondaan add a second to fire the Tilburg side ahead but PSV full-back Joshua Brenet grabbed on what was thought to be an 85th minute consolation for the home side. The PSV reserve side did not give up and in the final kick of the game Alex Schalk scored the equaliser to send Willem II back to Tilburg with just the point.

Excelsior missed the chance to go in third falling at home by the single goal to MVV Maastricht. Twenty-one-year-old Belgian midfielder Marco Ospitalieri notched the only goal of the game.

De Graafschap moved up to fifth with a 2-0 win away to Telstar thanks to the young strikeforce of Nathan Kabasele and Vincent Vermeij notching the all important goals.

Jong Ajax came from behind to defeat Achilles ’29 in a great 2-1 win on Saturday. The part-timers went ahead through Thijs Hendriks on 54 minutes before Serbian winger Dejan Meleg equalised just after the hour mark. Highly-rated Danish playmaker Lucas Andersen got the winner with twenty minutes of time remaining.

In other games, Helmond Sport were held to a 1-1 draw at home to Fortuna Sittard as Sparta Rotterdam fell to a 1-0 defeat while entertaining Almere City a day later. On Sunday, FC Volendam lost 2-0 to Den Bosch while Jong Twente defeated FC Eindhoven 1-0 on Monday evening. 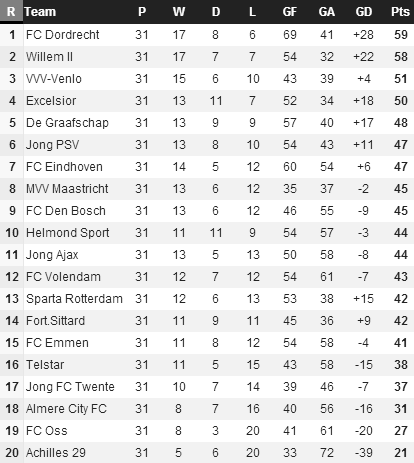