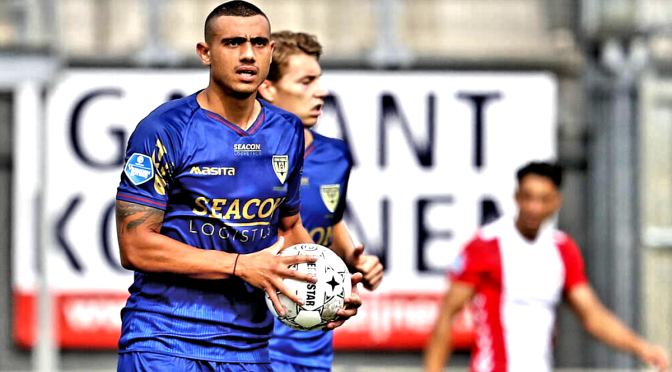 The first week of the Dutch top flight was full of excitement and Will Burns is on hand with a comprehensive review of the weekend’s action.

The opening week of the new season got underway at the Abe Lenstra Stadion as Heerenveen dispatched Willem II 2-0 on Saturday afternoon. The scoring was opened on 22 minutes by left-back Lucas Woudenberg after a great counter attack move by the hosts. After the man of the match, Joey Veerman played a delicate ball through the left-back on the edge of their other box, Woudenberg stormed up the field until he played a one-two with the ball to young winger Arjen van der Heide. Upon receiving the ball back, Woudenberg continued into the area to slot it past new Tilburg goalkeeper Robbin Ruiter.

The visitors pressed high in the second half thought they had equalized by danger man Vangelis Pavlidis smashed a ball home but he was deemed offside. However, both sides had chances to build on the score but it was Heerenveen that shut the door on their opponents by notching the second decisive goal. Within 15 minutes of time remaining, that man again, Joey Veerman whipped in a free-kick to be headed home by debutant Pawel Bochniewicz. The Polish centre-back was signed earlier this week from Gornik Zabrze for around €1.4m. A great opening day win for Johnny Jansen’s men that brought smiles on the faces of those that were lucky to attend, with only minimal crowds allowed into the grounds due to COVID-19 restrictions.

Feyenoord began their campaign with a relatively easy win away to John Stegeman’s PEC Zwolle.  Continuing his great goalscoring from last season, Steven Berghuis notched twice in a 2-0 win for the Rotterdammers. It didn’t take long to open the scoring with Berghuis hitting a low drive from outside the box past Zwolle stopper Michael Zetterer after just 5 minutes of play. The win was cemented with Berghuis penalty kick on 68 minutes after Orkan Kocku was fouled in the area by Thomas Lam.

The remaining game on Saturday was another 2-0 score line with Ron Jans’ FC Twente defeating Fortuna Sittard.  As mentioned in our season preview, it was yet another summer of all change in Enschede as Twente hired a whole new staff and technical director with many changes on the pitch too.  Meanwhile, the team seemed to gel and took the lead after ten minutes through former Ajax youth Queensy Menig. It was some good work on the left for Menig who played a quick pass exchange with impressive young left-back Jayden Oosterwolde and then cut inside to fire home for the lead.

Soon after the half-time break, Brazilian signing Danilo, a summer loan signing from Ajax, made it 2-0 converting a penalty after Branislav Nihaj dragged Jesse Bosch down in the box. Twente looked more likely to add to their score than any chance of a Sittard comeback.  A great start for Jans in his new role with his youthful squad with an average age of 23.6 years, third youngest only to Heerenveen (22.5) and Groningen (23.3).

Sunday opened up with a wild game in Emmen as VVV-Venlo came back from two goals down to end up winning 5-3 against FC Emmen.  The hosts took the lead early on with a fourth minute strike from Robbert de Vos before Croatian striker Marko Kolar added a second after the break to extend the lead to 2-0.

However, Greek striker Georgios Giakoumakis, a free agent signing in the summer from AEK Athens, notched a 22-minute hat-trick to take the game to 3-2. Nicolas Laursen levelled the game in the 76th minute before an own goal from debutant Caner Cavlan gave VVV the 4-3 lead. Emmen searched for an injury time equalizer but Jafar Arias put the nail in the coffin for Emmen making it 5-3 four minutes into stoppage time.

Frank Wormuth’s Heracles defeated the new-look ADO Den Haag side 2-0 on Sunday afternoon.  ADO is now managed by former midfielder Aleksandr Rankovic but the beginning to his new career did not go to plan when former PSV youth Rai Vloet gave Wormuth’s men the lead just after the break.  The very impressive Sylvester van de Water finished the scoring adding a second on 70 minutes. The 23-year-old carried the ball through the midfield before dishing the ball to Luca de la Torre on the left of the area, before getting on the end of the return ball to poke the ball past Luuk Koopmans in goal.  To make matters worse for Rankovic, he saw defender Boy Kemper (on loan from Ajax) sent off soon after.

Ajax got their title challenge underway with a narrow 1-0 win away to Sparta Rotterdam with some great difficulty. Erik ten Hag’s side played the majority of the match with just ten men after Nicolas Tagliafico was dismissed by referee Jochem Kamphuis, however it looked a harsh decision as the Argentine was deemed to purposely handball an attempt to put through Mohamed Rayhi on goal.

Despite the setback, debutant Antony who was lively throughout, scored from a bouncing drive outside the area just before half-time.  It was a goal that Sparta stopper Benjamin van Leer, playing against his old club, should be possibly stopped.

Henk Fraser’s men pressed the Amsterdammers but it was to no avail, Ajax grabbed their first win however, it was too close for comfort.

Arjen Robben did not experience a good return to FC Groningen as suffered an injury before the half-hour mark in his side’s 3-1 defeat to PSV.  Over 6,000 disappointed fans attended as the 36-year-old winger, who retired last July after a hugely successful career, returned to where it all began.

Soon after Robben’s substitution, Cody Gakpo showed great power to shrug off the challenge of Azor Matusiwa and finishing prowess to grab his first of the day to put Roger Schmidt’s side ahead. Howeve, it was not all plain sailing for Schmidt as an error from new goalkeeper Yvon Mvogo allowed Tomas Suslov level it up at 1-1.  The Swiss international and Jordan Teze were caught out playing the ball to each other in their own area and new Norwegian striker Jorgen Strand Larsen incepted a pass which landed at Suslov’s feet for the equalizer.

Soon after, PSV regained the lead as Donyell Malen was put through by Noni Madueke and finished past Sergio Padt.  PSV were given a harsh penalty on 82 minutes which Padt saved from Malen and despite, Groningen having their chances to level the game up, PSV emerged as the victors with Gakpo’s second goal on three minutes from time.  Notwithstanding, the horrendous error in defence for the hosts goals, Schmidt experienced a good start to his new head coach role at PSV.

The final game of the weekend saw RKC Waalwijk fall to Vitesse by the single goal thanks to a Oussama Darfalou effort in first half stoppage time.