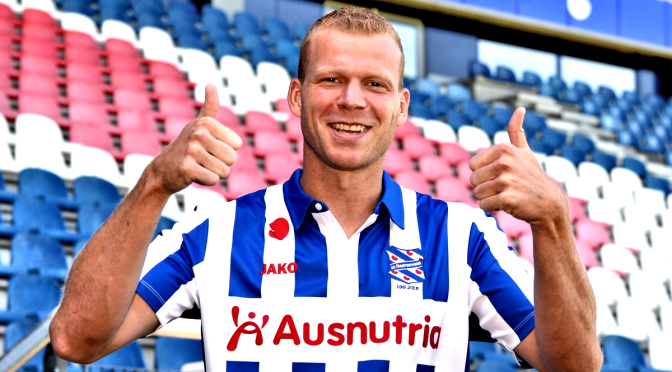 It’s finally here!  The new Eredivisie is set to get underway this afternoon with a barnburner at the Abe Lenstra Stadion as Heerenveen take on last years’ highflyers Willem II. Will Burns has picked his ‘Double Dutch’ bet for tonights game.

Ahhh yes, we have football back and I see Heerenveen-Willem II meeting as a good start to the affairs.

Heerenveen have strengthened this week by bringing in Polish centre-back Pawel Bochniewicz from Gornik Zabrze for around £1.26m, using some of the funds that CSKA Moscow provided for Chidere Ejuke earlier this summer. Additionally, they brought in German-Brazilian left-winger Oliver Batista Meier on loan from Bayern Munich to fill Ejuke’s boots.

Bringing back Henk Veerman to the club is a bonus for Johnny Jansen’s side. Last season, he notched 11 goals in 22 games last year for St. Pauli in the 2. Bundesliga. Standing at 6ft 5inches, he is a handful to defenders and won an average of 3.6 headed duels per game. With Mitchell van Bergen (profiled in our season preview) on the wing, big Henk should see some crosses coming his way often.

Willem II powered up to fifth in the division last year under Adrie Koster mainly due to the success of Greek striker Vangelis Pavilidis. He bagged in 11 goals in the 2019-20 curtailed season and is always worth a shout to get a goal for the Tilburgers.

Koster’s mind in this match may be elsewhere as on Wednesday evening, they have a tricky Europa League qualifying tie at home to Progress Niedercorn of Luxembourg. Koster stated earlier this week that his side were “ready for competition” but his treatment table is full with wounded players at this time.

New signings, Kwasi Okyere Wriedt and Leeroy Owusu both nursing long-term injuries and Driess Saddiki only returned to training this week. Koster has also declared to the press this week that Justin Ogenia, Rick Zuijderwijk and Dylan Ryan are not match-fit and may miss todays’ game.

This leaves his side depleted in a game I would have possibly predicted them to win.

Pre-season did not look good for sc Heerenveen losing all six of their warm-up games, however they were lacking defenders and now they have them installed into their squad. But the new central defensive partnership will take time to gel so I do see Johnny Jansen’s men conceding.  In attack, with van Bergen, van der Heide, Batista Meier and big Henk Veermen they have the talent to score. Let’s add Both Teams to Score to our Double Dutch bet.

I talked in the season preview about how I think PEC Zwolle could do with some bodies to help their campaign this year. Especially at the back, I think they look weak and well underprepared.

Some business has been completed during the summer with attacking midfielder Jesper Drost came home after a spell at Heracles.  He will be joined in the middle of the park by Rico Strieder who arrived from FC Twente and the highly-rated Slobodan Tedic was borrowed from Manchester City to take the burden off Mike van Duinen and Reza Ghoonchannejhad in attack.

Their opponents, Feyenoord still have 72-year-old Dick Advocaat at the helm, in which should be his last season… possibly. The Rotterdammers are well equipped to mount a serious title challenge and in the pre-season games they looked incredibly impressed defeating a strong Borussia Dortmund side 3-1.

The addition of Bryan Linssen is a great one for Advocaat. Linssen is an experienced goalscoring stalwart, scoring 88 goals in 278 Eredivisie games, he knows where the net is and he could very well beat last year’s total of 14.

PEC Zwolle are too weak. I see nothing but a Feyenoord win. Enough said.

So our first official bet of the season is here and it’s the first Double Dutch of year. Take the below two picks in a double (best priced at bet365) and enjoy the games.

Heerenveen-Willem Both Teams to Score and Feyenoord to win (2.67 at Bet365)