With yet another international footballing window looming large on the horizon, the twelfth round of action in the Dutch top flight got underway on Friday evening at the MAC3PARK Stadion where Willem II put back-to-back league defeats behind them by edging out fellow strugglers, PEC Zwolle in a five-goal thriller off the back of a double from their talismanic Spanish marksman, Fran Sol.

Saturday’s Eredivisie action began at De Oude Meerdijk where second half goals from Caner Cavlan and Jafar Arias eased FC Emmen to victory over another side struggling to beat the drop – NAC Breda.

Elsewhere, reigning Eredivisie champions, PSV Eindhoven made it twelve-straight league victories by hitting De Graafschap for four in Doetinchem to extend their lead at the top of the standing to eight points ahead of the rest of the weekend’s fixtures while Martin Ødegaard’s first goal in the colours of Vitesse ultimately proved just enough to secure the Arnhem-based outfit maximum points from their encounter with FC Utrecht.

The day’s action was brought to a close with Peniel Mlapa’s double firing VVV Venlo to victory over Limburg rivals, Fortuna Sittard in a five-goal thriller at De Koel.

Sunday’s Eredivisie action got underway with Groningen securing bragging rights over local rivals, Heerenveen in the Derby of the North off the back of first half goals from Django Warmerdam and Ritsu Doan. 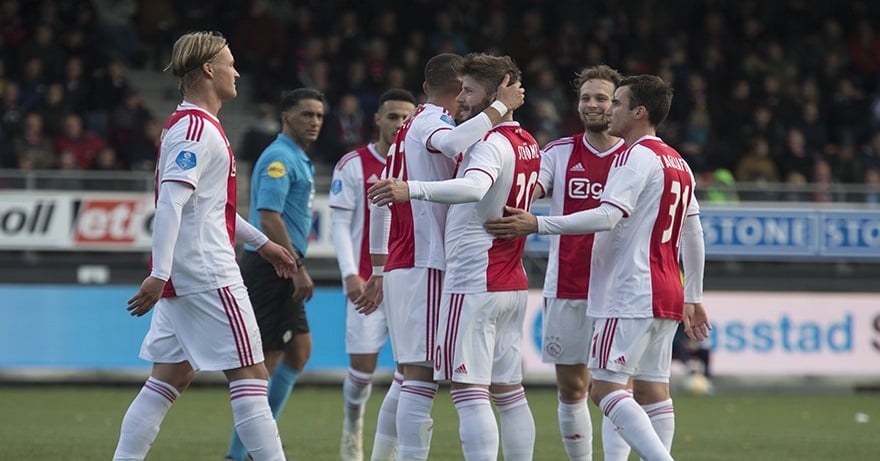 Elsewhere, a lone Guus Til effort six minutes into the second half ultimately proved just enough to see AZ Alkmaar take all three points from their clash with ADO Den Haag while, buoyed by moving another step closer to securing a place in the latter stages of the UEFA Champions League following their midweek draw in Lisbon, Ajax hit a hapless Excelsior for seven to reduce PSV’s advantage at the top of the standings to five points once more.

The twelfth round of Eredivisie action was brought to a close in Almelo where an own goal from the host’s unfortunate goalkeeper, Janis Blaswich just before the hour followed by a Jens Toornstra effort just four minutes later eased Feyenoord to victory over high-flying Heracles