Twenty four hours after PSV Eindhoven lock horns with Barcelona in the Nou Camp, it is the turn of four-time European Champions, AFC Ajax, who open their Group E campaign by playing host to reigning Greek champions, AEK Athens at the Johan Cruijff ArenA on Wednesday evening writes Steve Davies.

Twenty four hours after PSV lock horns with Barcelona in the Nou Camp, it is the turn of, Ajax, holders of the European title four times, who open their Group E campaign by playing host to reigning Greek champions, AEK Athens at the Johan Cruijff ArenA on Wednesday evening. 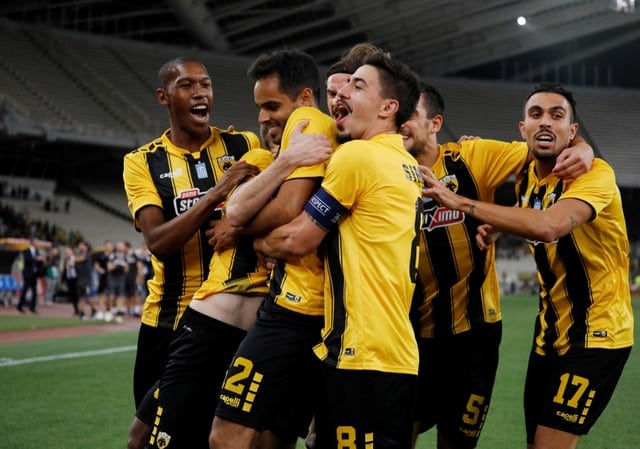 Despite picking up what was the club’s twelfth league crown last term, AEK Athens last title triumph came all the way back in 1994 with the intervening years seeing the club go to the brink of financial disaster and start all over again as an amateur outfit in the third tier in 2013 before achieving back-to-back promotions to reclaim their top-flight status.

However, having reached the semi-finals of the old UEFA Cup in 1977, the quarter-finals of the European Cup in 1969 in addition to making the same stage of the now defunct UEFA Cup Winners’ Cup in both 1997 and 1998, AEK’s European pedigree shouldn’t be ignored.

Having negotiated their way past Scottish champions, Celtic 3-2 on aggregate in the third round of qualifying, Marinos Ouzounidis’ side then edged out Hungarian outfit, Videoton in the play-off round by the same scoreline to claim a place in the group stage of the competition. In addition, AEK has begun their domestic campaign in fine form with three successive victories leaving them top of the pile with a two-point advantage over second place PAOK. Even more impressively, AEK is yet to concede a goal in the league while bagging seven goals in just three outings thus far.

Ajax’s European pedigree is of course without question. However, with the last of their four European Cup triumphs coming all the way back in 1995, the club, much like Dutch football’s UEFA coefficient, has endured a largely disappointing time on the European stage ever since.

Even the optimism surrounding Ajax’s run to the final of the UEFA Europa League in 2017, where a fearless Peter Bosz-coached side came up just short against Manchester United, failed to propel the club back to the forefront of European club football after tumbling out of qualifying for both the UEFA Champions League and then the UEFA Europa League in quick succession under Marcel Keizer last term.

However, with former FC Utrecht coach, Erik ten Hag having succeeded Keizer at the helm, Ajax once more look like a side to be feared and, having accounted for SK Sturm Graz, Standard Liege and Dynamo Kiev in relatively routine fashion to reach the group stage of the competition while opening their domestic campaign with four wins from five in which they have found the back of the net an impressive fourteen times and conceded only once to leave ten Hag’s men two points off pace-setting PSV Eindhoven at the top of the Eredivisie standings, the Ajax faithful have good reason to believe their side capable of snatching second place in a group that, Bayern Munich aside, appears to be there for the taking.

In a strange way, Ajax’s long and winding road to the group stage of the competition has actually served to help bring together a side that appeared at various points in the summer to be heading in different directions. Few expected the likes of Hakim Ziyech, Matthijs de Ligt or Andre Onana to still be at the club but their rumoured moves failed to materialise leaving Erik ten Hag with an embarrassment of riches at his disposal.

As such, Ajax’s strong start to the campaign both at home and abroad has many expecting great things from the four-time European champions and with a vociferous Johan Cruijff ArenA behind them, ten Hag’s men should have no trouble getting off to a winning start in Group E.

One thought on “Champions League: Look for Ajax to dominate AEK Athens”