Four-time European Cup winners, Ajax failed to advance to the group stage of the UEFA Champions League for the second year in succession after being humiliated in remarkable fashion by Russian underdogs, FC Rostov reports Steven Davies. 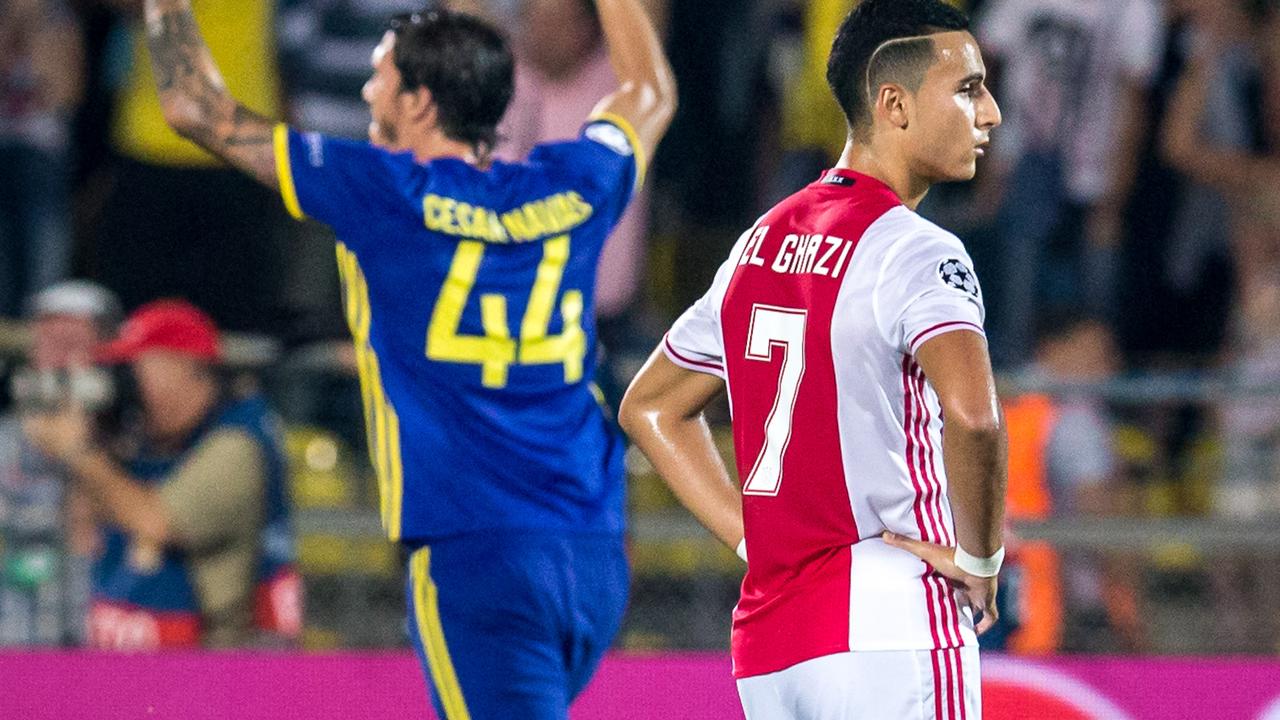 Following a calamitous home defeat at the hands of Willem II in which most of the Ajax backline was culpable, under fire coach, Peter Bosz shuffled his defence for a second leg that, according to many in the Dutch media, carried with it more than just qualification for the group stages of European club football’s richest prize.

The most surprising selection came between the posts for the visitors where, despite a big money switch to Barcelona being in the offing, Dutch international ‘keeper, Jasper Cillessen returned at the expense of Andre Onana – the 20-year-old stopper having made his first team debut against Willem II on Saturday. Meanwhile, a series of high profile errors in the same game resulted in Columbian centre half, Davinson Sanchez being dropped and Dutch international, Joel Veltman reverting to centre half with both Kenny Tete and Nick Viergever filling the full back roles as the injured Mitchell Dijks was also ruled out.

Having come back from the brink of bankruptcy while also surviving a relegation playoff fifteen months previously to the verge of not only winning the Russian league title last term but now reaching the group stages of the UEFA Champions League, FC Rostov entered the second leg of the tie with the Amsterdam giants holding a slight advantage by virtue of Ecuadorian international, Christian Noboa’s away goal in the 1-1 draw at the Amsterdam ArenA just over a week ago.

A solid defence had been the bedrock of the unfancied Russian outfit’s success under previous coach, Kurban Berdyev and Rostov’s caretaker coach, Dmitri Kirichenko, having continued with his predecessor’s defensive philosophy in Amsterdam, appeared intent on strangling the tie here as well.

Yet, despite their defensive stance it was the Russians who came out of the blocks the quicker with the first clean cut opportunity of the game falling to Aleksandr Erokhin who, having latched onto a through ball, out muscled Jairo Riedewald before being denied by Cillessen – who stayed tall to deny the striker with 9 minutes gone.

Ajax did rouse from their slumber shortly thereafter as Chelsea loanee, Bertrand Traore lifted an effort over the bar from the edge of the six yard box after Nemanja Gudelj had seen his shot charged down with 19 minutes on the clock.

Rostov however, would continue to take it to their illustrious visitors and when Iranian, Sardar Azmoun latched onto a cross from the right with a towering header, Jasper Cillessen was left rooted to the spot as the Russians took the tie by the scruff of the neck going into the half time interval.

Any thought of an Ajax comeback was dashed within minutes of the resumption of play as a free kick from Timofei Kalachev was met by Erokhin who made no mistake with a close range header that put the Russians 2-0 up on the night and 3-1 up on aggregate after 52 minutes.

But, if Peter Bosz entered the game under pressure, what followed would have set alarm bells ringing at De Toekomst.

Eight minutes later, a game of ping pong in the Ajax area eventually saw the ball land at the feet of Ecuadorian, Noboa who – having opened the scoring in the tie just over a week ago in Amsterdam – stabbed the ball past a helpless Cillessen from close range to effectively seal the tie with half an hour remaining.

But a humiliating night was to get even worse for the former European powerhouse, when, six minutes later, an Ajax attack broke down and turned into a swift Rostov counter attack with Erokhin beating a number of Ajax players before putting in Dmitriy Poloz who beat the Ajax offside trap before calmly rounding Cillessen to make it 4-0 on the night and 5-1 on aggregate.

Ajax offered little by way of resistance throughout the contest – often being caught in possession and creating few real goal scoring opportunities.

Having drug his side through recent indifferent performances, Ajax skipper, Davy Klaassen was as anonymous as the rest of his team mates on a miserable night for de Godenzonen but did manage to get the Dutch side on the scoresheet from the penalty spot after substitute, Kasper Dolberg was brought down in the Rostov area by Fyodor Kudryashov – who was then shown the red card with seven minutes remaining.

However, it proved little more than a consolation for Peter Bosz whose position as Ajax coach is becoming increasingly untenable as the four time European Cup winners – already playing catch up in the Eredivisie standings – were embarrassingly dumped out of qualifying for European club football’s richest prize for a second year in succession.

Man of the Match: Bertrand Traore