Week three of the Eredivisie is in the books and Steven Davies reports on all the action.

This weekend’s games got underway got underway on Friday evening at the Stadion Woudestein in Rotterdam where two of the unlikeliest of early season pacesetters put their respective 100% records on the line.

New Excelsior coach, Mitchell van der Gaag has worked minor miracles at the tiny Rotterdam outfit since his arrival from FC Eindhoven and the early signs were that his new club’s incredible start to 2016/17 would continue – central defender, Jurgen Mattheij firing the home side ahead with a bullet header – the 23-year-old’s second in as many weeks – from a Ryan Koolwijk corner with just eight minutes on the clock in an encounter in which the home side enjoyed the lion’s share in terms of both possession and scoring opportunities.

However, like Mitchell van der Gaag, new ADO Den Haag coach, Zeljko Petrovic deserves great credit for the way in which he has transformed a side that, having stuttered to an uninspired mid-table finish in 2015/16, ended Friday evening sitting atop the fledgling Eredivisie table – a 25th minute strike by Gervane Kastaneer – his third in as many games – followed by a diving header from towering centre half, Tom Beugelsdijk with just over twenty minutes to play preserving the 100% record of the men from The Hague.

Saturday’s action began in Kerkrade where Vitesse Arnhem took all three points thanks to a solitary strike from Chelsea loanee, Lewis Baker in the 22nd minute – the England under 21 international inflicting a first defeat on new Roda coach, Yannis Anastasiou.

The shock result of the weekend occurred at the Amsterdam ArenA, where pointless Willem II pulled off a remarkable victory by two goals to one – coming from behind after a header from Ajax’s inspirational skipper, Davy Klaassen had initially put the home side one up with the match less than a minute old.

Coming into the encounter pressure had been mounting on new Willem II coach, Erwin van de Looi after heavy defeats to both Vitesse and Heracles had opened his reign in Tilburg in inauspicious fashion. However, it was his opposite number, Ajax coach, Peter Bosz – with one eye on de Godenzonen’s important trip to Rostov-on-Don in the second leg of their UEFA Champions League playoff tie on Wednesday evening – who was left feeling the heat after a thunderous goal from Erik Falkenburg on 28 minutes followed by a smart turn and strike by Spanish marksman, Fran Sol just three minutes later turned the score line on its head.

Both goals highlighted frailties in the Ajax defence – a loose pass from Colombian centre half, Davinson Sanchez on halfway gifted possession back to the visitors who broke quickly through Brazilian, Bruno Andrade whose square ball from the right found an unmarked Falkenburg who made no mistake – rattling in his second goal in three matches. Then, just minutes later, Thom Haye turned Dutch international, Joel Veltman inside out before finding an unmarked Sol in the box with time and space aplenty to hammer the Tillburgers second past debutant goalkeeper, Andre Onana – who was included in the starting line-up as Jasper Cillessen’s big money switch to Barcelona nears completion.

Things go from bad to worse for Ron Jans as he watched his PEC Zwolle side get torn apart by a ruthless PSV Eindhoven at the MAC3PARK Stadion just a week after the home side were incredibly hit for three without reply by newly promoted Sparta.

Phillip Cocu’s defending Eredivisie champions wasted little time in putting their hosts to the sword – Frenchman, Nicolas Isimat-Mirin setting the back-to-back title winners on their way to the top of the table after 22 minutes with a close range header before Jorrit Hendrix doubled the visitors advantage with ten minutes to go before the interval with a rasping drive from just outside the area.

Zwolle never really looked like making the game a contest at any point in the second stanza and a late header from Luuk de Jong followed by a first Eredivisie goal for 18-year-old, Steven Bergwijn sealed a comprehensive away day victory for the side from Eindhoven.

Rounding out Saturday’s action, Peter Hyballa’s NEC secured their first win of the season at the expense of Jurgen Streppel’s Heerenveen. Centre half, Dario Dumic opened the scoring for the hosts just after the half hour mark before Pelle van Amersfoort levelled for the visitors from Friesland ten minutes before the half time break. This battle of the early season draw specialists seemed destined to end in similar fashion until Reagy Ofosu turned Lucas Bijker inside out, cut in from the right and smashed a low drive past an exposed Erwin Mulder in the Heerenveen net to secure the first win of the Peter Hyballa era in Nijmegen.

A 39 minute hat trick by Manchester City loanee, Enes Unal saw the men from Enschede race out to a 3-0 lead going into the half time break before a remarkable comeback by the home side through strikes by Mimoun Mahi, Oussama Idrissi and a well-placed free kick by former Fulham and Ajax striker, Danny Hoesen levelled the score line with six minutes left to play.

Yet, with the home side riding a wave of momentum it was the visitors who found a last gasp winner when substitute, Fredrik Jensen broke into the Groningen area before squaring the ball for fellow replacement, Oosterwijk who rolled the ball into an empty net to secure the Enschede outfit’s first points of the season at the third time of asking.

There was a battle of the Eredivisie new boys at Het Kasteel where reigning Eerste Divisie champions, Sparta Rotterdam entertained Go Ahead Eagles – who themselves secured promotion via the promotion/relegation playoffs at the end of last season.

Having masterminded an incredible 14 match unbeaten run that culminated in promotion following his appointment in February 2016, Han de Koning and his Eagles have found life back in the Eredivisie more of a challenge than that of his opposite number Alex Pastoor, whose Sparta side came into this game off the back of a remarkable 3-0 away win over PEC Zwolle.

Yet there was little to choose between the sides for the majority of the match and de Koning will have felt particularly hard done by after his side succumbed to a late penalty – Sander Fischer bringing down Belgian striker, Loris Brogno who then picked himself up to convert the resultant spot kick for his third goal in as many games with five minutes to play.

Precious little has gone right for the recipient of the 2015/16 Rinus Michels Award – Erik ten Hag, whose Utrecht side have now collected just one point from their opening three games after slumping to their second home defeat of the season – this time at the hands of AZ Alkmaar.

John van den Brom’s men came into the encounter fresh from a comprehensive 3-0 success in the first leg of their UEFA Europa League playoff against FK Vojvodina in Serbia and took the lead at the Stadion Galgenwaard after 25 minutes through Norwegian, Marcus Henriksen’s spectacular second goal of the season.

The Utrecht coach did manage to elicit a response from his troops after the half time interval – 20-year-old forward, Patrick Joosten bringing the home side back on level terms with a speculative drive from well outside the area with 53 minutes on the clock. Yet, it was the visitors who ensured they would head into Thursday’s second leg at the AFAS Stadion in the best possible frame of mind when Iranian international, Alireza Jahanbakhsh secured all three points with a well-placed daisy cutter from just outside the area with six minutes remaining. 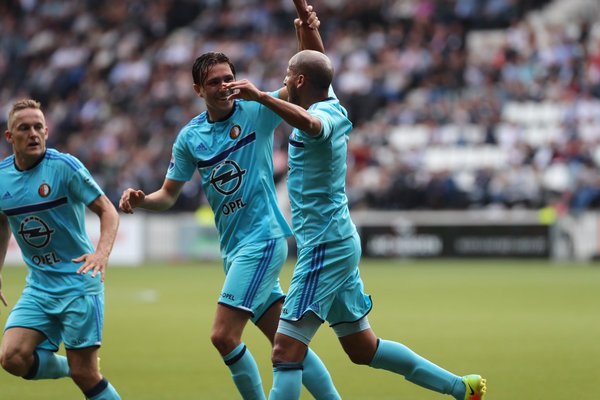 A Karim El Ahmadi volley was the sole highlight of a largely uneventful contest at the Polman Stadion in Almelo where Giovanni van Bronckhorst’s Feyenoord tuned up for next weekend’s Rotterdam derby against Excelsior by continuing their imperious early season form, making it three wins from three at the expense of Heracles to close out the third week of action atop the Eredivisie standings.