As always, Steven Davies is on hand to inform you of all the action in Week two of the Eredivisie.

Week two of the 2016/17 Eredivisie season got underway on Friday night at the Abe Lenstra Stadion where, for the second week in succession, Jurgen Streppel’s Heerenveen came from behind to share the spoils in a four-goal affair.

In contrast to Streppel’s delight, his opposite number, FC Utrecht coach, Erik ten Hag, was left feeling short-changed, not only by the controversial manner in which the home side squared the score-line – a goalmouth scramble (which could just as easily have resulted in a free kick to the visiting side) following a Heerenveen corner which was finished by Iranian international, Reza Ghoochannejhad in the 69th minute, but also the fact that ten Hag’s men had, for the second week in succession, put in a performance worthy of much more than the single point his side ultimately left Friesland with following two quick-fire goals in three minutes just after the half hour mark – a Sebastien Haller penalty followed by a Bart Ramselaar cracker from well outside the area that had initially overturned Luciano Slagveer’s 12th minute opener for the home side.

Despite being just two weeks into the 2016/17 campaign, things are rapidly reaching crisis proportions in Groningen after Ernest Faber’s men followed up last week’s humiliating pounding at the hands of Feyenoord by slipping to an embarrassing defeat to Feyenoord’s Rotterdam neighbours, Excelsior in the early evening fixture on Saturday.

By sharp contrast, new Excelsior coach, Mitchell van der Gaag has enjoyed a perfect start with two wins on the bounce. A glancing header from 23-year-old central defender, Jurgen Mattheij after just two minutes had elapsed at the Stadion Woudestein followed by an incredible David Beckham-esque, Kevin Vermeulen lob from inside his own half of the field just seconds after Groningen ‘keeper Sergio Padt had rattled the Excelsior post with a header after coming up for a last-gasp free kick in the second minute of stoppage time secured the points for the tiny Rotterdam outfit and left Groningen at the bottom of the early season standings.

Mitchell van der Gaag wasn’t the only coach celebrating an unlikely six-point haul from his side’s opening two fixtures of the season after Zeljko Petrovic guided ADO Den Haag to an unlikely victory over Vitesse Arnhem at the GelreDome.

Things had started well for Henk Fraser’s side – Ricky van Wolfswinkel putting the Arnhem outfit in the ascendancy after 22 minutes, but ADO were back on level terms just after the half hour through Gervane Kastaneer who struck again just after the hour mark to secure all three points for the men from The Hague.

The surprising results continued at the Amsterdam ArenA on Saturday evening.  With the first leg of their UEFA Champions League playoff against Russian club, Rostov on the horizon on Tuesday evening, Ajax coach, Peter Bosz surprisingly elected against shuffling his pack for the visit of Roda JC. A Kasper Dolberg brace either side of an Adil Auassar effort should have been enough to see de Godenzonen past the plucky Kerkrade outfit. However, a Tom van Hyfte equaliser deep into stoppage time salvaged a point for the visitors despite Frederic Ananou seeing red for Yannis Anastasiou’s men after picking up his second yellow card of the match with seconds remaining on the clock.

Saturday’s Eredivisie action concluded at the MAC3PARK Stadion in Zwolle where the home side were incredibly hit for three without reply by newly promoted Sparta. A well taken goal from Loris Brogno following a deft back-heel from Stijn Spierings and Aussie forward, Craig Goodwin’s deflected effort either side of the half time interval set the visitors on their way to victory with Brogno adding a touch of the emphatic to the score line for the reigning Eerste Divisie champions with three minutes to go.

Heracles easily dispatched a woeful Willem II in Almelo in Sunday’s early fixture – racing out to a three goal lead through an Iliass Bel Hassani freekick after 26 minutes followed by a Paul Gladon double after the interval. Erik Falkenburg’s spectacular lob of Heracles ‘keeper, Bram Castro may well prove to be a strong contender for Goal of the Week in the Eredivisie but, with just 8 minutes left on the clock, it proved too little too late for Erwin van de Looi’s men who have now conceded an alarming seven goals in their opening two matches of 2016/17.

Two teams seemingly moving in polar opposite directions met a De Kuip where Giovanni van Bronckhorst’s, Feyenoord overcame the spirited but ultimately futile efforts of Rene Hake’s beleaguered FC Twente. Jens Toornstra opened the scoring for the Rotterdammers on 23 minutes but the anticipated avalanche of goals failed to materialise thereafter as the home side found their counterparts from Enschede in stubborn mood – Nicolai Jorgensen’s second goal of the season eventually putting the game to bed with ten minutes remaining to leave Feyenoord perched atop of the fledgling Eredivisie table on goal difference.

A real ‘game of two halves’ unfolded in Deventer where newly promoted Go Ahead Eagles found themselves under immense pressure during a first half dominated in terms of chances and possession by Peter Hyballa’s NEC Nijmegen – the visitors deservedly taking the lead when a Quincy Owusu Abeyie through-ball split the Eagles’ brittle back line and put Kevin Mayi in the clear – the forward beating ‘keeper, Theo Zwarthoed with a low drive.

However, despite the visitor’s first half dominance, the second stanza began with the home side on the front foot – Hans de Koning’s charges equalising through a 25 yard thunderbolt from skipper, Sander Duits just four minutes after the resumption before Estonian import, Henrik Ojamaa cut in from the right and curled a well-placed effort into the top right hand corner of Joris Delle’s net to send the raucous home crowd at De Adelaarshorst into ecstasy just short of the hour mark.

But, the Deventer-based outfit failed to emulate fellow promoted side, Sparta’s exploits from the previous day – being denied their first win back in the top flight by Frenchman, Mayi, who, having exchanged a quick one-two on half way following the breakdown of an attack by a home side in search on their third of the afternoon, found himself once more one on one with Zwarthoed who he beat for a second time to tie the score at two apiece but neither team could fashion a winning goal. 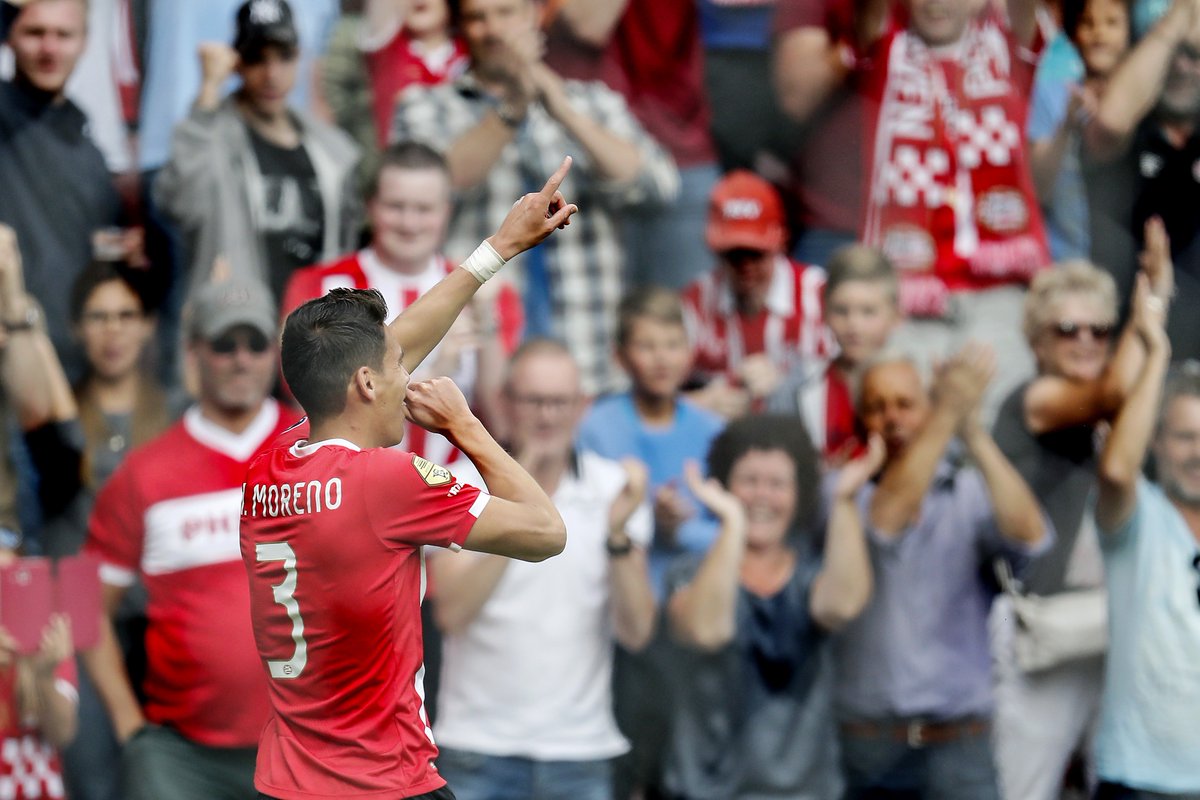 The second round of matches was rounded out in Eindhoven where reigning champions, PSV squeezed past a resolute AZ Alkmaar in a largely uneventful encounter thanks to a Hector Moreno header after 52 minutes of play at the Philips Stadion.