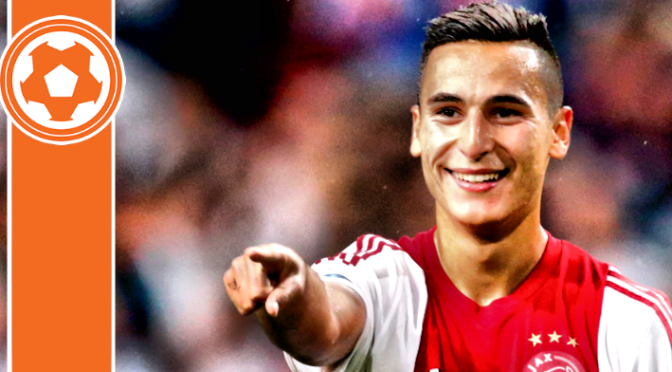 Ajax are on a mission to reclaim the Eredivisie title at first attempt from PSV Eindhoven. Last season’s champions have been weakened over the summer and Frank de Boer will believe his side are favourites going into the 2015/16 campaign. In their opening three matches, Ajax have looked like a side capable of winning the title, but their elimination in the Champions League highlights that there are still weaknesses in the side. The club can’t compete at the very top of the game, mainly due to the lack of finances in the Dutch game. However their academy is as strong as ever and a number of young players have displayed that in the opening three Eredivisie fixtures writes Jake Jackman.

The Dutch giants have a very young squad, which has advantages and disadvantages. Their Champions League defeat against Rapid Wien showed their lack of experience, particularly regarding game management which is crucial in a two legged cup tie. They should have been able to beat the Polish outfit and concerns grew among the supporters when they were knocked out. However, three convincing consecutive league victories without a goal being conceded has showed that Ajax should be considered favourites to regain the Eredivisie title.

Frank de Boer opted to sign Nemanja Gudelj and Mitchell Dijks this summer, which could be some great business. Neither are huge names, but they both have plenty of experience in the Dutch top flight and they have slotted in seamlessly into the Ajax side. The former has been really impressive, grabbing a goal and an assist already, while also dominating games in the middle of the park. Meanwhile, former Ajax youth team player Dijks has two assists to his name so far, highlighting the attacking qualities that he brings to the club. It would have been easy for Ajax to panic after being outclassed in all departments by PSV last season, but they stuck to their principles and these two signings show that the club were right to do so.

The club’s attacking play has been excellent in their opening three games as would be expected from Ajax. The club are averaging 16.3 shots per game this season, which highlights the creative quality in the side. Their average possession (56%*) and average passing success (81%*) shows that the side will dominate games in the Eredivisie. After the disappointment of losing their Eredivisie crown, Ajax’s early season form shows that they are determined to reclaim the title this season and they could even surpass the achievements of the dominant PSV side of last year.

Every side needs a star player to look to for inspiration and Anwar El Ghazi could be developing into that player for Ajax. The forward is only 20-years-old, and has a lot of developing to do, but the potential is obvious and he is already performing well for Ajax. Memphis Depay has left a gaping hole in the Eredivisie after his spectacular performances last season and there are a number of players who could step up to replace him as the league’s leading player, including El Ghazi. The 20 year old has already scored four times in the league and he has the quality to go on to surpass the twenty goal mark. If he does, he will quickly emerge as one of the hottest talents in European football.

Ajax have had a very good summer with the board making some smart decisions, rather than panicking after losing the league title. Frank de Boer will want to go out on a high before leaving the club and this team could develop into one of the best sides the club have had this millennium. After the disappointment of an early Champions League exit, the manager will know the importance of a strong domestic season. They should be able to compete in both the league and in the Europa League. The latter is a competition that the club could go far in, as they have shown in the last few years that they can beat some of the very best in European football. The Europa League is still a very competitive tournament and it could give this side some much needed experience in European ties. PSV have started the season averagely and Ajax already look to be the favourites to reclaim their crown.

*All stats courtesy of Opta Sports.