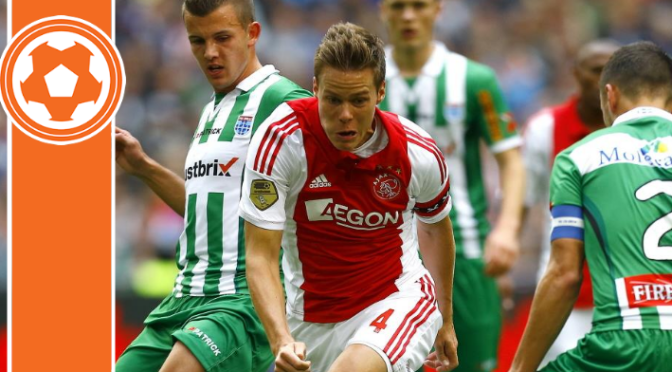 Ajax have face many ups and many downs so far this season. Losing top player Daley Blind to Manchester United, being drawn into an extremely difficult Champions League group, and dropping unnecessary points against the likes of Groningen and PEC Zwolle mark the lows up to this point writes Alex Pieter.

Ajax also have some positives to draw on so far this season, such as a well-played draw at home in the Champions League to PSG, three points away to Feyenoord, and the emergence of young talents such as Lucas Andersen and Ricardo Kishna.

While many Ajax fans are panicking about the current state of the club, it is not as bad as it may seem. Simon Gleave (@SimonGleave) points out that Ajax actually have more points this year from equivalent Eredivisie fixtures than last year. That is the good news; the bad news is that so does chief competitor, PSV Eindhoven.

The frustration of many Ajax fans stems from the team’s Champions League performances. Ajax drew PSG 1-1 at home, but it left a sour taste in mouths of many, since Ajax had a few legitimate shots to come away with three points. It looked as if Ajax had turned a corner in the second half of that match, by far the best 45 minutes of play by Ajax to date, legitimately outplaying the Parisian club. Given the status of a club like PSG, Ajax should be quite content with the point at home.

Perhaps the most frustrating showing of the year came in Ajax’s second European match, away to APOEL Nicosia. It is never easy for teams to goes to Cyprus, and APOEL is a tough, tough side, as shown in their first match against Barcelona. Yet, Ajax desperately needed to come away with three points. Instead, Ajax came out flat, and looked content to bat the ball around the back. The chances they did create were squandered by poor finishing.

Yet, for Ajax fans that was not even the worst part. APOEL scored their lone goal on an alleged Ricardo van Rhijn handball in the box. Replay showed the call was a weak one, at best.

Edwin van der Sar said after the Champions League draw, which placed Ajax in a group with Barca, APOEL and PSG, that the goal remained to make it to the final 16 of the Champions League. Any chance Ajax had of reaching that goal set by van der Sar disappeared after not coming away with all three points in Cyprus. It is easy to blame the referees, but Ajax had to find a way to win that match. They certainly had the opportunities.

So where does Ajax go from here? For one, they have to find some sort of rhythm; Frank de Boer has constantly tinkered with the starting XI in an attempt to find some. Secondly, they need their top players to play like they are capable of. Niklas Moisander has been disappointing, as has Kolbeinn Sigthorsson. These are two of Ajax’s most experienced players, yet it hasn’t showed. Additionally, players like Joël Veltman and Nicolai Boilesen have each taken a step back, struggling to realize their full potential through the early part of the year.

Another tough break for Ajax has been the injury problems of Lasse Schöne. He is the man who makes the squad go, as was evident against PSG. Ajax need Schöne at 100% if they want to find success the rest of the way.

Frank de Boer is facing arguably his toughest season as Ajax manager. Ajax have a young squad, even by their standards, and lack the talent they have had on de Boer’s past squads. Additionally, PSV has put together a very talented side in Eindhoven and Cocu’s men pose a legitimate threat to Ajax’s title streak.

Will Frank de Boer pull through and work his magic as he has so many times before? Or is the challenge just too much this year? Ajax are entering a crucial leg of the season, and these next few weeks will go a long way in determining the success of the 2014-2015 campaign for Ajax.