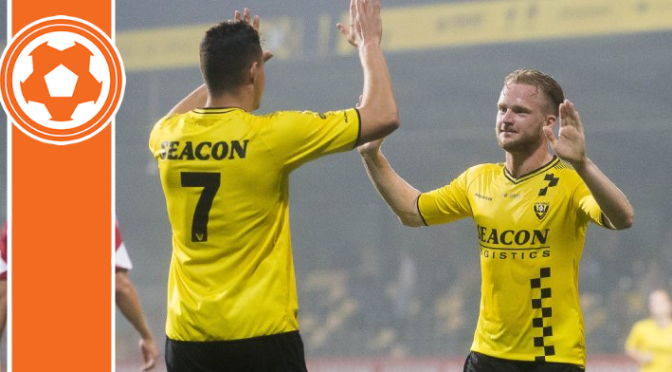 Round 7 of the Dutch Eerste Divisie began on Friday evening with seven matches on the opening evening writes Kalkeren Kieran.

We start with a 3-2 win for VVV-Venlo over Almere City FC, the home side were cruising going into half time with a 2-0 lead through goals from Mevlin Platje and Danny Post but Almere came out the stronger of the two sides after the break as the attempted to salving something from the game, Vincent Janssen netted his first goal of the night on the 54th minute to reduce VVV’s lead to one goal, although Mevlin Platje had other ideas and he restored the home sides two goal cusin on the 60th minute. Almere scored late into added time as Janssen scored his second of the night but the match finished 3-2 to VVV.

FC Den Bosch thumped Helmond Sport 3-0 thanks to goals from Erik Quekel,Jordy Thomassen and Edoardo Ceria. The night got worse for the away side when Kevin Gomez-Nieto picked up a second yellow in the closing minutes of the match. Its Ceria’s 4th goal in his last 5 appearances an impressive record as the striker continues to make a name for himself in the league.

Achilles 39 finished 2-2 at home to FC Oss, although both teams are predicted to finish at the foot of the table, it was an exciting encounter with the match producing a countless number of efforts for the two sides. FC Oss lead at the break through Fatih Kamaci but Achilles equalised on the 70th minute when Thijs Hendriks netted for the home side, Twan Smits was shown a straight red just a few minutes after his team had levelled but the 10 men scored again and Hendriks got his second of the night on the 86th minute. FC Oss fought to the end and were rewarded with an equaliser through Kevin van Veen.

Sparta Rotterdam returned to winning ways as the defeated Jong PSV 2-0, Giovanni Hiwat and Johan Voskamp scored for the Rotterdam side as they remain 5th in the table respectably.

Jens van Son and Fries Deschilder both netted for FC Eindhoven as they defeated Fortuna Sittard, the away side looked the strongest throughout the match and dissevered all three points of their travels, the match finished 0-2.

Telstar drew with Jong FC Twente on Friday evening although the home side were in the lead for the most the match thanks to a Felitciano Zschusschen goal on the 28th minute, Jong FC Twente found an equaliser on the 72nd minute through Tarik Tissoudali and the match finished all square at 1-1.

Vlatko Lazic penalty in the 86th minute separated De Graafschap from MVV Maastricht, the match was a poor spectacle throughout but the away side snatched a victory in the closing minutes when Lazic slotted home the penalty.

Anthony Limbombe netted twice in the first half for NEC Nijmegen as his side defeated FC Emmen at home on Saturday evening, although the leagues joint top scorer Sjoerd Ards was shown a straight red early into the second half for the home side, it didn’t affect the match in the slightest as NEC doubled their lead through Alireza Jahanbakhsh and Tom Daemen. The 4-0 win for Brood’s side means they remain joint top of the league and have only conceded 4 times in their opening matches, and impressive record for the NEC defence who will face a spirited De Graafschaap side next weekend.

FC Volendam collected all three points on their journeys this weekend to face the blue and yellow of RKC Waalwijk, Volendam opened the scoring on the 17th minute through Guyon Philips, Ludcinio Marengo then scored for the away side to give them a two goal lead, RKC pulled one back on the 82nd minute when Kenny Anderson scored but the away side had the final say as Kevin Brands scored making it 1-3 to Volendam.

Hicham Faik’s goal on the 50th minute for Roda JC separated the Limburg side from Jaap Stam’s Jong Ajax side, Stams side looked dominant throughout the match but they failed to take their chances and Faik’s goal gave the limburg side a 1 goal lead in which they held onto to take the win 1-0.