The waiting is over and the Eredivisie returns tonight as Ron Jans’ PEC Zwolle host FC Utrecht, hot off the heels of their Johan Cruijff Schaal win over Ajax on Sunday. Will Burns says backing Zwolle to claim victory is how to get the new season underway with a winner. 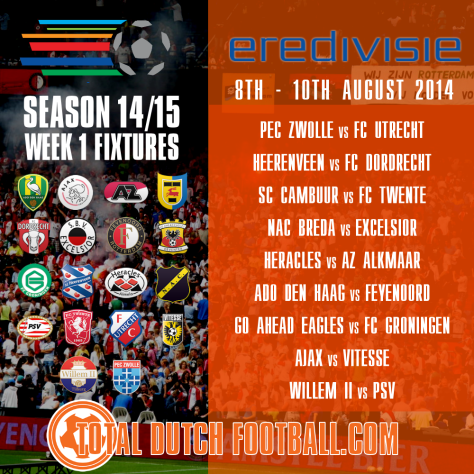 The Eredivisie returns tonight as Ron Jans’ PEC Zwolle host FC Utrecht, hot off the heels of their Johan Cruijff Schaal win over Ajax on Sunday and Will Burns says that backing Zwolle to claim victory is the way to start the new season with a winner.

PEC Zwolle head into this opening day full of confidence after claiming their second trophy in 105 days. The Blauwvingers defeated Ajax by the solitary Stef Nijland goal last Sunday at the Amsterdam ArenA. Head coach Ron Jans suffered a blow to his season preparations earlier this morning losing arguably his best player last term, Kamohelo Mokotjo to FC Twente for a meagre €1.5m fee. However, it’s not all doom and gloom as earlier in the week, speedy winger Jody Lukoki arrived on a three-year deal from Amsterdam, the 21-year-old spent last season at Cambuur and should be a great addition to Jans’ selection. The winger should get a start on the right this evening with 19-year-old New Zealander Ryan Thomas on the left. On Sunday, Zwolle lined up with Nijland alone up front, however, Jans has added two Greek strikers to his ranks, Dimitrios Ferfelis (TuS Koblenz) and Nikos Ioannidis (Olympiakos) to help in front of goal, but may start on the bench this evening.  Losing defensive rock Darryl Lachman to Twente earlier in the summer was disappointing, although the central defensive pairing Trent Sainsbury and Joost Broerse held well against Ajax on Sunday and should retain their place. In midfield, the defensive Ben Rienstra has arrived from Heracles this window and should protect the back four.

It is a new season and a new manager for Utrecht after a disappointing campaign last year. After working his way up the ranks at the club, Rob Alflen replaced Jan Wouters in May following Utrecht’s horrific campaign which almost saw them involved in the relegation battle towards the end of the season. Looking to rebuild the team, Alflen brings a fresh approach and could hand lots of debuts to new signings tonight. A striker well known to watchers of the Eredivisie, Danny Verbeek arrived on loan from Belgian Pro League side Standard Liège after spending the last two years loaned out to NAC Breda. 24-year-old Dutchman and former Arsenal youth Nacer Barazite joined from Monaco and could line up in midfield. New defensive duo could start Christian Kum (Heerenveen) and Ramon Leeuwin (Cambuur) and Anouar Kali could make a return in the red shirt after a year at Roda. Alflen however, will be missing up to five first-teamers as midfielders Édouard Duplan and Willem Jansen, goalkeeper Robbin Ruiter, centre-forward Ruud Boymans and left-back Michael Zullo all miss out with injuries.

After last weekend’s exploits, PEC Zwolle head into the game as favourites with evens being offered at Bet Victor and due to amount of talent that Utrecht is missing, I recommend this to be a great bet. With it being the opening game, it could be a cautious affair and a narrow Zwolle win could be the outcome, the scoreline of 2-1 to Zwolle at 8/1 looks very tempting. Ron Jans’ tactics may be more productive going forward than defensively this season and his side, as always will be an entertaining one to watch. If Zwolle do attack then Utrecht could do some damage on the counter with Jens Toornstra being the main threat scoring 19 goals in his total 48 appearances for the club from midfield. Toornstra is a menace from set-pieces also and is valued at 23/10 for anytime goalscorer. We all know how the goals can flow in the Eredivisie and both teams to score is an interesting but short price of 8/13, nevertheless, if combine that with a PEC Zwolle win and you can nail a great price of 5/2.

PEC Zwolle to win with Both Teams to Score – 5/2