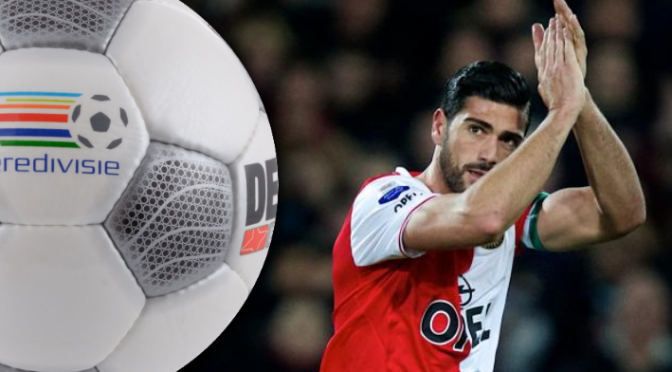 A great day for Feyenoord, PSV and AJAX fans as FC Twente were felled by the Eindhoven side 3-2 to help Ajax out who could go seven points clear at the top with a win at PEC Zwolle. For Ronald Koeman’s men, it was a tremendous home performance smashing five past Anton Janssen’s NEC side.

FC Twente’s title hopes were stalled by a resurgent PSV side in a fantastic five-goal thriller on Saturday evening.

It was a dream start for PSV who exploded out the blocks and took the lead after just seven minutes. Colombian right-back Santiago Arias, a summer signing from Sporting Lisbon, bombed down the right-wing, cut inside the box, shrugged off Andreas Bjelland to fire past Nick Marsman in goal.

Both sides played with high-octane pressure all the way up the pitch and on 23 minutes, PSV broke through the Twente defence again. Memphis Depay whipped in a pin-point cross to meet the head of Jürgen Locadia who got in front of Bjelland to double the lead. The Eindhoven crowd was in raptures, and the feel good factor was back in the Philips Stadion.

The second goal fired some life into Twente who could possibly feel their title challenge slipping away. Just past the half-hour mark, Serbian playmaker Dušan Tadić, on-fire as of late with 9 goals and 11 assists this season, nearly reduced the deficit. He intercepted a ball in the final third of the pitch and skipped the challenge of Jorrit Hendrix and smashed a shot from 25 yards that rattled Jeroen Zoet’s crossbar.

The back and forth action returned in PSV’s favour with a decent chance for Depay on 37 minutes. Breaking on the counter has become a specialty for the young PSV side and from a Twente corner, Depay found himself through on goal, but the winger saw his effort creep wide.

Robbert Schilder’s quick throw-in lead them to getting a goal back on 40 minutes. High up the pitch, Schilder caught the PSV defence asleep as the ball was thrown into Quincy Promes’s path and holding off Jeffrey Bruma’s attention, Promes blasted the ball past Zoet for 2-1.

After the break, even though they still had the lead PSV did not sit-back and searched for a third and in the 52nd minute they had the goal. Left-back Jetro Willems scored the goal of the night, emerging from the left-wing with the ball and finely curling a low shot from the edge of the area past the scrambling Marsman that had misjudged the shot.

The scoring was not finished and nor were Twente as we saw the fifth and final goal on 68 minutes. PSV failed to clear a corner and Kyle Ebecilio took advantage a prod home. The two goal conceded by PSV today will the type of errors that Phillip Cocu and Guus Hiddink will want to cut out in future games.

Twente pressed hard to level the game but to no avail and in the final stages of the games, the Phillips Stadion maybe said goodbye to Tim Matavz, whose rumoured €8m transfer to Rubin Kazan could happen sometime this week.

The Eindhoven crowd were jubilant and it was a great win for Cocu’s side that took them to fifth in the Eredivisie standings with Heerenveen (6th) still to play in Sunday’s games.

NAC Breda jumped up to ninth placed with a 2-0 home win over Roda, who slip back into the bottom three.

It was an even game but Roda failed to make their chances into goals and it was NAC that nearly broke the deadlock just before the hour mark. Mats Seuntjens lofted a perfect ball over the top of the Roda defenders, and the onrushing Rydell Poepon stretched out for the ball but his effort scraped past the post.

The game was killed off two minutes before full-time by Stipe Perica. Also a substitute, the Croatian chased a ball down the right-wing in a tussle with the emerging Roda goalkeeper Filip Kurto. Perica won the race and got the ball before the ‘keeper and slid the ball home into the empty net.

Dick Advocaat’s AZ side have been in good form winning defeating Groningen and Vitesse in the last seven days, but after a poor performance on Saturday, they fell to Go Ahead Eagles 2-1.

The Eagles took the lead with the goal of the day in the Eredivisie. Full-back Doke Schmidt found himself free to try a daring long-range shot from 40 yards out that gave Esteban no chance of stopping, hitting the post and into the net.

The 7,938 crowd inside the Adelaarshorst was loud and imposing as usual and AZ failed to get the ball down and play. Swedish striker Denni Avdić replaced the injured Aron Johansson up front and the 25 year-old failed to make an impact for Advocaat’s men.

The three points were clinched late on by a great counter attacking goal as AZ pressed for an equaliser. After a Stephan Andersen kick from the opposite end, Jeffrey Rijsdijk retrieved and dished out the ball to Jarchinio Antonia who was racing through on goal. The 23-year-old sidestepped Esteban and defender Jeffrey Gouweleeuw could not stop the effort on the line.

Roy Beerens  notched a consolation goal for AZ, but it was a bad day at the office for the Alkmaar club.

Ronald Koeman’s Feyenoord hit five past NEC as Jean-Paul Boëtius and Graziano Pellè ran riot all over Anton Janssen’s side.

The away side took the lead but should have had a goal earlier in the first minute if it were not for Feyenoord keeper Erwin Mulder. Michael Higdon, an aerial threat all game, knocked the ball down into the path of Christoph Hemlein. The German lashed a volley into the top corner but a strong palm from Mulder saved his side.

However, ten minutes later he could not stop another volleyed effort. Danish midfielder Søren Rieks opened the scoring after Higdon had again nodded the ball down into the Dane’s path and hit the first-time shot that looped over Mulder’s reach and into the goal.

Minutes later, John Goossens nearly scored the equaliser from a free-kick on the edge of the area but Karl-Johan Johnsson tipped the effort over.

The score was levelled up on 26 minutes after some great play from Boëtius. The winger played the lovely ball through to the overlapping Miquel Nelom on the left, the full-back swung a low cross into the back post where Lex Immers arrived to tap home.

Within nine minutes, Feyenoord has turned the game on its head with their second goal. Daryl Janmaat and Immers combined until the right-back found himself inside the area to pull the ball back from the byline to Graziano Pellè to make it two for the home side.

It should have been 3-1, on 39 minutes after the troublesome Boëtius pirouetted in the area and was subsequently brought down by NEC captain Ryan Koolwijk. Pellè stepped up but Johnsson saved with ease to the keep the score at 2-1 at half-time.

In the second-half, Koeman’s side ran riot. On 55 minutes, Jean-Paul Boëtius got a deserved goal tapping in an Immers cross at the back stick. Then the goal of the game came four minutes later.

Again, Nelom bombing down the left, crossed into the penalty at medium height. Italian hitman Pellè got in front of his marker Lasse Nielsen, and perfectly volleyed beyond Johnsson. A textbook goal that even gained the applause of the visiting fans.

He action was far from over as the visitors were awarded a penalty on 64 minutes after referee Reinold Wiedemeijer has adjudged Nelom fouled Hemlein in the area. This time, Rieks fired the ball into Mulder hands and the score stayed 4-1.

The final nail in the coffin for NEC came on 78 minutes and it was the impressive Boëtius grabbing his team’s fifth and his second after a great counter attack.

A great performance for Koeman’s side that moves ahead of Vitesse into third on goal difference.