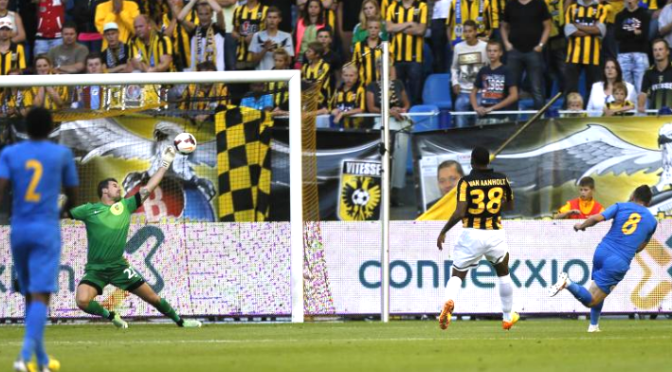 Another Eredivisie crashed out of the Europa League when they were odds on favourites to progress, as Vitesse tasted a 2-1 defeat to Romanians FC Petrolul.

The Arnhem side were full control from the opening whistle using Ecuadorian right-winger Renato Ibarra’s speed to frighten the life out of the Petrolul defence. With the Vitesse midfield discovering to how much damage Ibarra could cause, he saw the ball often and was near to scoring, before blazing his chance over the bar after smartly cutting in from the wing.

Against the run of the play, the Romanians went ahead on 20 minutes after attacking with a route one ball from goalkeeper Peterson Pecanha. Tall Congolese striker Ferebory Dore flicked it on and Vitesse’s on-loan defender Patrick van Aanholt failed to cut the ball out. This allowed Frenchman Damien Boudjemaa to home in on goal and fire past the helpless Piet Velthuizen.

Vitesse needed to regroup and fight back, and they surged forward looking to get a goal before half-time, but they wasted numerous opportunities, with young Norweigan Marcus Pedersen having the best chance cleared off the line just before the interval.

The Dutch side looked leggy after the break and Petrolul looked to wrap the game up. However, the GelreDome crowd cheered them on and the hosts always looked their most dangerous from a corner, and minutes after Kelvin Leerdam headed over they found their equaliser on 72 minutes.

Defender Jan-Arie van der Heijden, who earlier in the first-half received a black eye from an elbow, slammed the ball home after it was uncontrollably bouncing around from a Theo Janssen corner.

The supporters now were louder than ever and just eight minutes after the goal, Vitesse were given another inspiration to attack for more goals as Jean Alcenat received his second booking for a foul on Georgian wide man Giorgi Chanturia. Alcenat was protesting and he had every right to, as it was a very soft decision that ended in Chanturia throwing himself to the ground.

The crosses were coming in thick and fast and the strange fact that the aerial threat of Mike Havenaar did not start the game is a question that only Peter Bosz could answer. The striker went the closest to winning the game with five minutes remaining but after receiving a cross from Chanturia, he headed straight at goalkeeper Pecanha.

The game was settled in a cruel way for Vitesse and more so their spectators. In the last kick of the game, the ten-man of Petrolul won a free-kick in a dangerous area on the outside of the box. Romania striker Gheorghe Grozav stepped up and curled the ball home with a shot that left Velthuizen stranded.

After the game, Janssen was interviewed by Fox Sports and stated: “This is destroying and we are ashamed. I think we were much stronger than the Romanians, but a lot of the team have played below their normal level. This is just a shame for the club and the fans.”

When asked the Vitesse midfielder agreed that without the sales of star players in the summer they would have progressed this evening: “With Bony and Van Ginkel in the squad, we would have definitely won this contest. Up front we did not have enough power to finish.”

A terrible performance from yet another Eredivisie side, and now Vitesse join FC Utrecht as being eliminated from the tournament at the qualifying stage. This will not help the Dutch coefficient for future European competitions, and the KNVB can only hope that PSV and Ajax can display a good showing in the Champions League and Feyenoord and AZ Alkmaar in the remainder of this tournament when they draw is made on Friday.