In a major contrast to last night’s semi-final, with only two shots on target in the whole game on 90 minutes, this one was hardly the classic that many predicted. It was a tense, cautious affair with both teams to looking not to gift the opposition a chance at goal.

The Dutch played the majority of the game in a 6-3-1 formation and kept themselves disciplined, an obvious attempt to keep Lionel Messi quiet, and it worked a treat. The man of the match was undoubtedly Aston Villa defender Ron Vlaar, especially for his efforts with Messi. Every time Messi looked to weave some magic and create an opening, the big Dutchman was there to slam the door shut, sticking a leg out and clearing the ball. The Barcelona megastar looked frustrated and a bit lost to say the least. It was a tremendous performance throughout for Vlaar, who has had an excellent tournament when many pundits wrote him off before a ball was kicked.

Another star was once again the veteran of the Dutch side, 33-year old Dirk Kuyt. He started the game at right wing-back, then was moved over to the left and for the 120 minutes he ran himself into the ground like a 20-year old would. Another man, who has had an excellent tournament and proved that he could still do a job for one of Europe’s elite teams for his versatility alone.

With 15 minutes of play remaining, Gonzalo Higuaín had an excellent chance. The impressive Enzo Perez found space on the right and bent in a lovely early ball, Higuaín beat the offside trap and got across Stefan De Vrij but stabbed the ball into the side-netting.

The Oranje’s best chance came late on of normal time – Arjen Robben suddenly found himself through on goal, but he took one touch too much and gave Javier Mascherano the chance to get across and make a brilliant block once Robben got the shot off.

The extra time began with more of the same, neither side willing to open the game up and attack with any get risk. Inside the second half of the additional time, Argentina started to press. Rodrigo Palacio found himself with a golden opportunity, but after Messi played a perfect lofting ball into the area, the Inter striker nodded the ball straight into Jasper Cillessen’s hands. Moments later, Maxi Rodriguez should have done better with a half volley at the back post but failed to connect properly to threaten the Dutch goal.

The star of the game, Vlaar bravely stepped up for the first penalty but smashing down the middle did not work and Sergio Aguero easily stopped. This put immense pressure on Cillessen and in a massive contrast, first up for the Argentine’s was Messi who dispatched his spot kick past the youngster with ease. The penalties continued where Robben scored while Romero pulled off a great save from Sneijder next. Dirk Kuyt needed to score and did, but with the Argentines not missing a penalty Maxi Rodriguez stepped up for number four and blasted past Cillessen, who should have done better.

The Dutch are out, Argentina head to Rio to face Germany on Sunday for all the spoils. 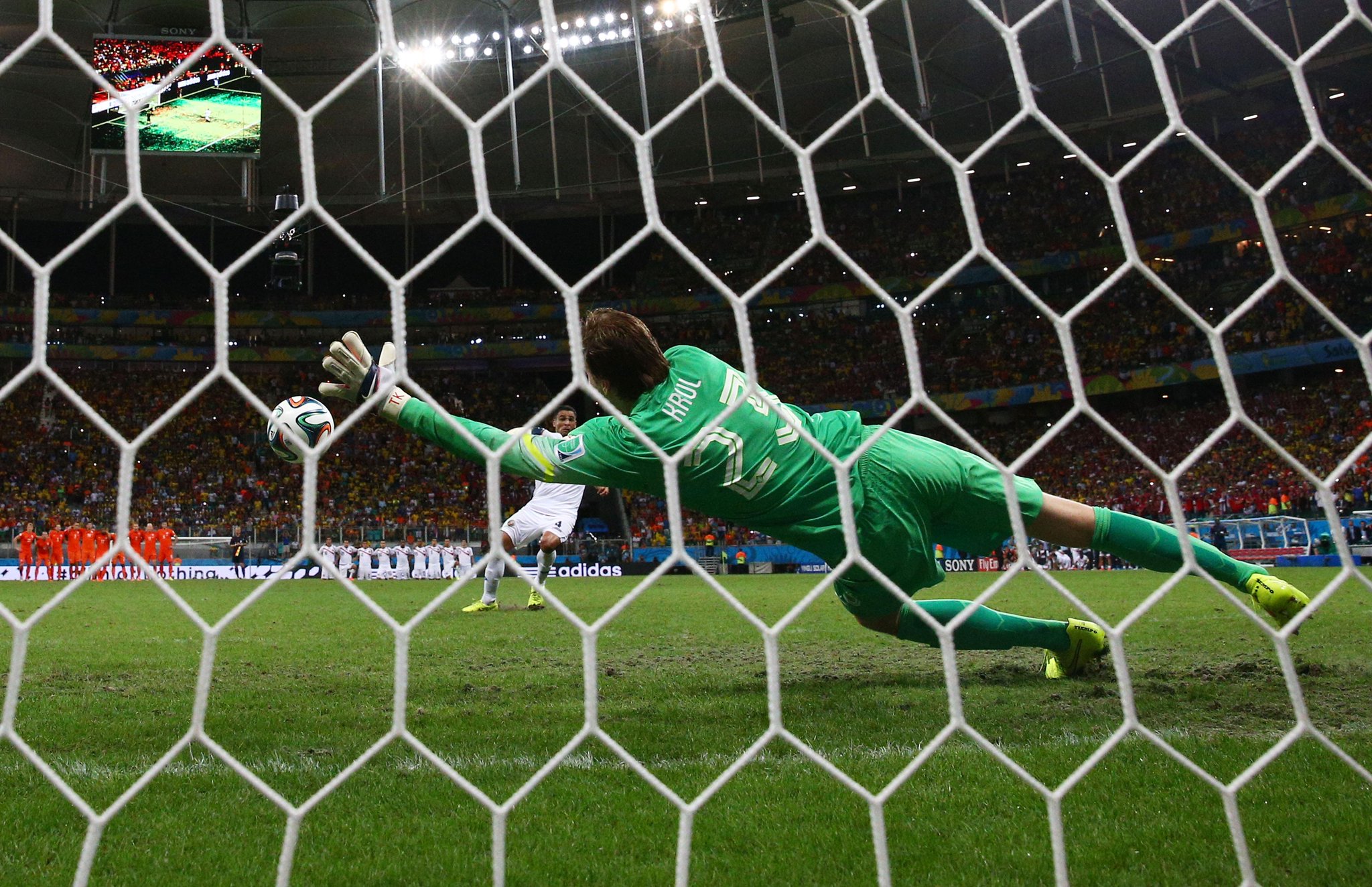 It was an uncharacteristic performance from Louis van Gaal’s boys, as they rescued their unbeaten record in World Cup qualifying with an injury-time penalty kick to secure a 2-2 draw with underdogs Estonia.

Amkar Perm attacking midfielder Konstantin Vassiljev struck twice for the home side and looked to have sealed a memorable victory for the Estonians. However, the Dutch have previously won all six of their matches in Group D of the UEFA qualification section, but they had to rely on a controversial Robin van Persie penalty to gain a point.

Dangerman Arjen Robben broke the deadlock with his 19th goal for his country. The Bayern Munich winger curled his effort beyond the reach of goalkeeper Sergei Pareiko from inside the penalty area.

The Oranje lead only lasted 15 minutes as Vassiljev broke through a weak challenge 25 yards from goal and sent a low shot past Swansea ‘keeper Michel Vorm. The Estonian then doubled his and his teams tally with a cute lob just before the hour, as he met a perfect through ball from Joel Lindpere and lifted the ball over Vorm.

However, Manchester United hitman Robin van Persie broke Estonian hearts after winning a penalty from what appeared to be a good challenge from Raio Piiroja. The defender received a second yellow card and RVP converted the spot kick.

Tuesday sees Van Gaal’s side to have the chance to redeem themselves against Andorra, and the Dutch fans will be expecting a much improved performance.