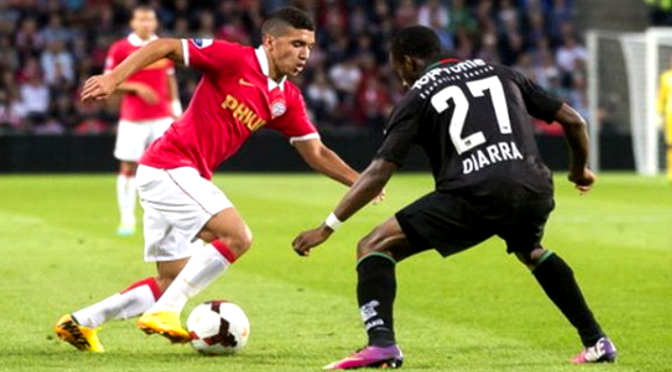 Marco Bizot (FC Groningen) – In what seems a rarity, Bizot kept a clean sheet for Groningen this week as they kept up their 100% record. They have to thank Bizot at times, pulling off saves to keep his team at zero.

Santiago Arias (PSV) – The right-back, just signed for a snip from Sporting Lisbon looks to be fitting right in with the Eredivisie table-toppers. A strong performance helping the right wing in attack from the young Colombian.

Jeffrey Bruma (PSV) – Another excellent performance from the PSV man in the 5-0 win of NEC. Strikers Michael Higdon and Christoph Hemlein were kept at bay with ease by the big commanding central defender.

Darryl Lachman (PEC Zwolle) – The 23-year-old stormed forward with pleasure at times in the 3-1 win over Heralces and also put in some good blocks to intercept the Almelo attacks.

Xandro Schenk (Go Ahead Eagles) – A fantastic free-kick goal for the Eredivisie new boys earns him a spot in our team of the week.

Kamohelo Mokotjo (PEC Zwolle) – Another excellent display and scored a lovely goal in Zwolle’s 3-1 win over Heracles on Saturday.

Georginio Wijnaldum (PSV) – The new captain of PSV managed to go one better than last week and hit the net twice from attacking midfield.

Christian Eriksen (Ajax) – Although he tasted defeat against AZ and looked dejected after the game, he has to credited for yet another free-kick goal.

PLAYER OF THE WEEK Zakaria Bakkali (PSV) – A record-breaking five-star performance on Saturday and now the youngest player to ever score an Eredivisie hat-trick.

Romeo Castelen (RKC Waalwijk) – The returning Castelen scored his first Eredivisie goal for six years and was influential in his teams 4-2 victory over Vitesse Arnhem.

Marnix Kolder (Go Ahead Eagles) – His winning goal with ten minutes remaining on Saturday gave Go Ahead their first win on their return to the top flight.