It was a night marred with a horrendous injury to Luke Shaw, but PSV will treat this as a night to remember, a great return to the Champions League with an unlikely victory against Louis van Gaal’s Manchester United writes Will Burns. 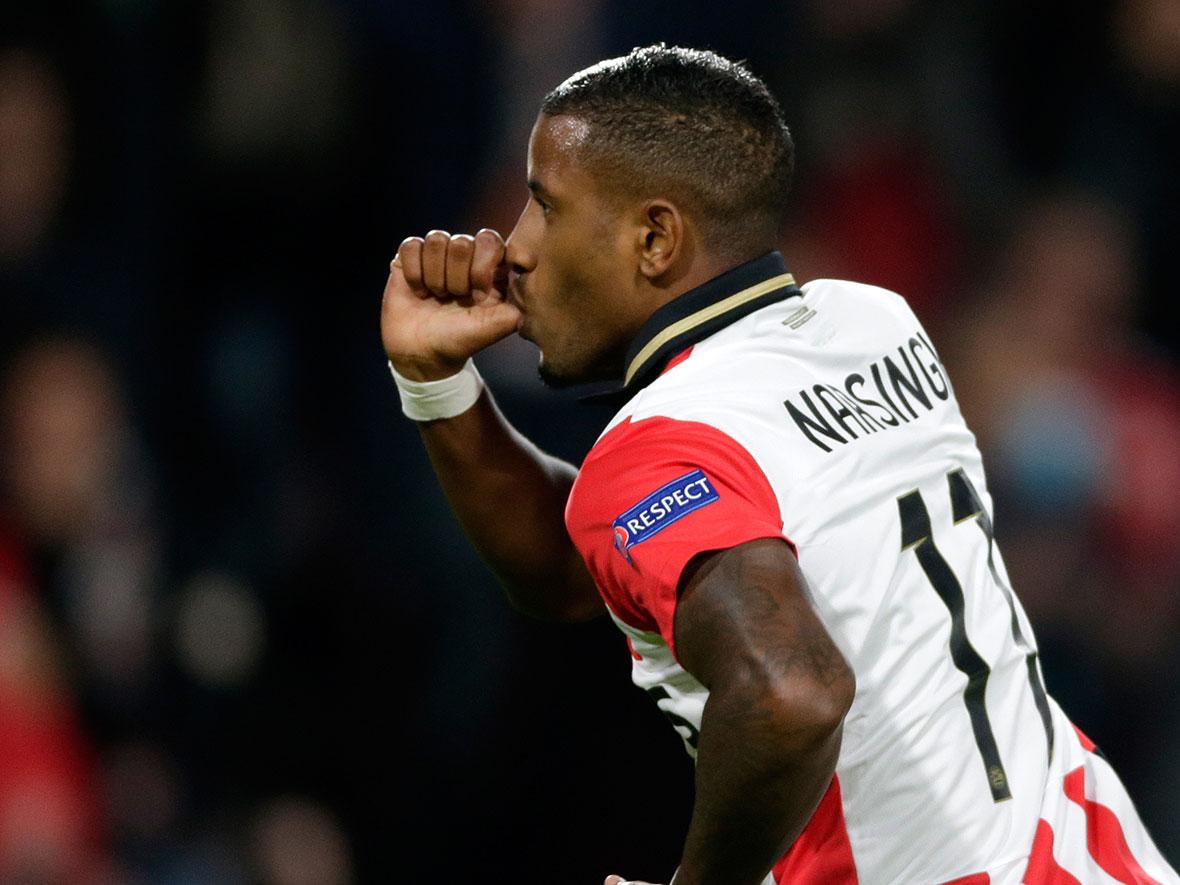 As the teams emerged this evening, the atmosphere was electric and for good reason. The Philips Stadion had not seen Champions League football since the 2008/09 season when current head coach Philip Cocu was actually on the pitch at that time for PSV. This time he was leading from the sideline and grabbed a vital victory in Group B of the Champions League.

With Memphis Depay returning ‘home’ of sorts, Louis van Gaal handed a first start to £58m man Anthony Martial in the lone striker role for the Manchester United. The Red Devils came out with a high press, especially on Andrés Guardado, hustling the midfielder from the off. The match failed to get going and the visitors were forced make an early change after quarter of an hour when Luke Shaw suffered a suspected broken leg.

The left-back was moving at pace and made a great run into the PSV area, he was then met head-on with a strong challenge from Hector Moreno. The Mexican defender immediately moved away from the area looking distressed which explained to all it was a bad one. Shaw was replaced by Argentine international Marcos Rojo after a six minute delay to comfortably remove the England defender from the pitch. No booking, no penalty, no foul was given by Italian referee Nicola Rizzoli – Moreno left his feet in the challenge and was lucky to still be on the pitch.

The compassionated fans applauded Shaw off and the minutes surrounding the injury gave the stadium a real subdued feel. Once the game got going again, PSV pressed dangerously with the speed of Luciano Narsingh and Maxime Lestienne causing some trouble but the flag of the linesman was raised more than often halting the play. 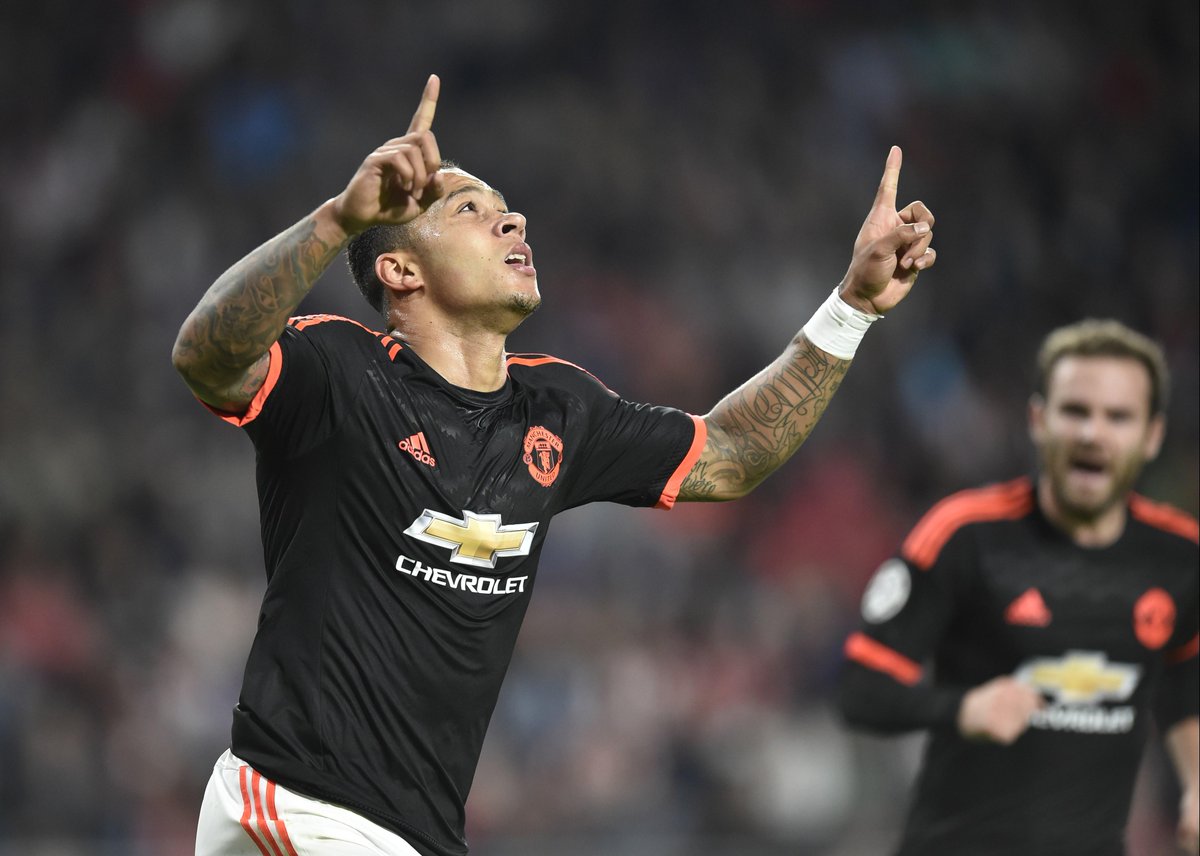 Although the game was playing at a good tempo, we had to wait 38 minutes for our first chance as Chris Smalling nodded wide from a Juan Mata free-kick. In the second chance of the game, three minutes later, we had the opening goal. Daley Blind sliding in former PSV favourite Depay, whom overpowered Santiago Arias, slipping his challenge with great footwork and slotted home with a goal that the attendance has seen time and time before.

The former PSV hero could have grabbed his second just a minute later. Mata gifted Depay a ball which sent the winger wide and subsequently dragged his shot the wrong side of Zoet’s post. The hosts were on the ropes and Smalling, somehow found himself through on goal and forced a strong stop from Zoet to keep the score at 1-0.

The lead only lasted six minutes as Cocu’s men grabbed a fortunate equaliser on 47 minutes. Lestienne with a whipping corner and defender Moreno easily rose over Matteo Darmain and the Mexican’s effort skimmed off Blind’s head to nestle into the net.

The second half began an even contest with both sides using swift attacks to build chances but neither goalkeeper were trouble initially before Narsingh gave David de Gea no chance with PSV’s second goal.

As they threatened in the first half, PSV’s famous counter attacking football gained them the unlikely lead. Great awareness from Guardado spotted the troublesome Lestienne sitting on the high defence of United. The Belgian received the ball and sped down the left and crossed at the back post for the unmarked Narsingh nod home from yards out and the Philips Stadion erupted.

Van Gaal’s side should have been level soon after, Bastien Schweinsteiger lofted a wonderful ball over the PSV back four, putting it on a plate for Mata, but the Spaniard failed to control the ball and the Eindhoven jeers and cheers sounded out to sarcastically congratulate him.

The visitors dominated and hunted the equaliser but lacked options in the final third. Van Gaal added Marouane Fellaini into the mix replacing Ander Herrera but the big Belgian, like on Saturday in United’s 3-1 win over Liverpool; he did not have any affect.

United’s energy waned and the long balls were being booted forward as PSV got men behind the ball and rode out the unlikely win.

It was great performance for PSV who finally deliver some good news for the Eredivisie and Dutch football in general. The Eindhoven side had done their country proud tonight and on the final whistle they celebrated like they had lifted the trophy, not just a victory in their first game.

Welcome to week three of our Eredivisie Team of the Week which leads into our Eredivisie ‘Player of the Season’ competition.  All players have performed so well this weekend that Martijn Hilhorst and Will Burns have decided they should be in our team of the week.  Each player in the eleven receives one point and whichever player is declared ‘Player of the Week’, he receives an extra point.

JEROEN ZOET (PSV): Second week in a row for Zoet after keeping Ajax at bay to clinch a vital 3-1 win for PSV in the title race, even this early on in the season.

JOSHUA BRENET (PSV): The young defender held firm against the likes of Lasse Schone and Davy Klaassen on Sunday and made attacking runs with ease.

MAIKEL VAN DER WERFF (PEC Zwolle): The big defender, who missed a penalty in the Europa League midweek, made amends with a great performance capped off with a free-kick goal in the 2-1 win over Vitesse.

LUCAS BIJKER (SC Cambuur): Man of the match in the 1-0 win over Heracles on Friday with a match-saving tackle in the dying seconds of the game.

AARON MEIJERS (ADO Den Haag): Sitting in at left-back, Meijers linked play up well and caused many problems to Groningen in ADO’s 3-0 win on Sunday.

ALI MESSAOUD (Willem II): An influential performance topped off with a great goal leading Willem II to their first win of the season, 3-0 over AZ Alkmaar.

ROLAND ALBERG (ADO Den Haag): Alberg is playing the best football of his life at the moment and created two excellent goals to dispatch FC Groningen with ease 3-0.

GEORGINIO WIJNALDUM (PSV): Wijnaldum is in the TOTW for the second week in a row and was a constant threat to Frank de Boer’s Ajax on Sunday. Four shots and four successful dribbles earns his another week in our team.

ADNANE TIGAHOUDINI (NAC Breda): Young winger Tigahoudini frightened the life out of FC Twente’s defenders and won his side an unlikely point against FC Twente.

LUCIANO NARSINGH (PSV): Narsingh was excellent and looked back to his best so his named our Player Of The Week. With an assist and an excellent goal, Narsingh combined with Depay looks a mouthwatering prospect this season for PSV.

TOMMY OAR (FC Utrecht): The young Australian seems to improve every time he plays and created both goals in Utrecht’s shock win against Feyenoord.

Piet Velthuizen (Vitesse) – A fine performance that kept Vitesse Arnhem a clean sheet in their 1-0 over FC Twente.

Henk Dijkhuizen (Roda JC) – Attacking well against ADO, capped with a lovely goal and a clean sheet in Roda’s 4-0 win.

Darryl Lachman (PEC Zwolle) – The Zwolle defender is fast becoming the breakout star of the Eredivisie, cool, calm central defender and dangerous in the attack.

Kamohelo Mokotjo (PEC Zwolle) – Yet another excellent performance from the South-African, former club Feyenoord looked to have made a major mistake letting him go on a free.

Anouar Kali (Roda JC) – Another free transfer in the summer, never let ADO Den Haag midfield get in the game and terrorized their defence.

Mitchell Donald (Roda JC) – A smart headed goal that helped his team to their dominating 4-0 win over ADO.

Alfred Finnabogason (Heerenveen) – Scored a brace in the big 3-3 draw with Ajax on Friday night.

Mark-Jan Fledderus (Roda JC) – The Roda captain lead his team to the best win of the season and created one and scored a great free-kick goal.

Filip Kurto (Roda JC) – A fine performance that kept Vitesse Arnhem at bay on Sunday and earned his side a point.

Joshua Brenet (PSV) – Replaced the poor Santiago Arias and excelled in the 3-0 win over Go Ahead Eagles. Earned his starting spot against AC Milan on Tuesday night.

Mike te Weirik (Heracles) – A wonderful long range goal and a dominating display to help his side to a 4-2 away victory at Heerenveen.

Karim Rekik (PSV) – Kept the dangerous Marnix Kolder under control throughout and looked ready for Mario Balotelli and co on Tuesday.

Erik Bakker (SC Cambuur) – A commanding performance leading his team to their first win of the season, capped with a well-taken goal and an assist.

PLAYER OF THE WEEK Youness Mokhtar (PEC Zwolle) – The biggest cog in the PEC Zwolle machine, fleeting about, involved in every attack and grabbing a great goal in the process.

Nemanja Gudelj (AZ Alkmaar) – Two assists for the former NAC Breda man who has settled in well under Gertjan Verbeek.

Kolbeinn Sigþórsson (Ajax) – His two goals on Sunday lunchtime kept his side in the title race, fighting back from a goal down to Feyenoord.

Bryan Linssen (Heracles) – A sublime bit of skill with a lashing shot earned the new signing from VVV Venlo a wonder goal and the final spot in the Team of the Week.

New Jong Oranje coach Albert Stuivenberg has selected  to the squad for the friendly against the Czech Republic on Wednesday in Prague.