Throughout this year’s campaign, we have seen some great talents emerge as scouts from all over Europe honed in on them. Myself and the remainder of the staff at TotalDutchFootball.com have been assessing who can be declared as the best ‘Breakthrough Talent of the Season’.

All staff were asked to name their top three talents. Each first pick received three points, second place received two points and one point was awarded for the third pick. The results are below… 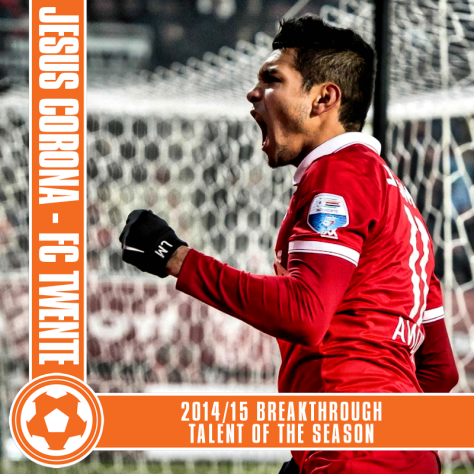 The little Mexican nicknamed “El Tecatito”, signed on a free transfer aged 20 from Liga MX side Monterrey after rejecting a new contract from the Mexican club in 2013. After taking a while to settle in under Albert Schreuder, Corona now 22-years-old, has shown he is perfect example of a pacy winger with a tremendous dribbling ability to torment full-backs down either flank.

He appeared in 27 games for Twente this year, notching nine goals and supplying four assists, showing to be a shining light, in a what has been a disappointing season for his side. Tecatito’s consistency has enhanced his already impressive skills. His speed and trickery make him a very elusive footballer who provides depth to the team, which results in goal opportunities.

Due to Twente’s crippling financial status, Corona looks to be moved on next season and could end up leaving the Eredivisie. However, the young Mexican has finally shone in Holland and he is surely set to raise a big chunk of funds for the Enschede club.

The Heerenveen pair have been surprising successes for Dwight Lodeweges this year. Both used as replacements for summer sales, Alfred Finnbogasson and Hakim Ziyech respectively have excelled. The stocky German striker, Uth has scored 15 times in 32 outings to become the club’s top scorer and managed to use his strength to hold the ball up and created 10 assists. Also notching goals is Swedish winger Larsson with eight with four assists. Both players have linked with moves away themselves this coming summer, not an unusual process for Heerenveen.