Welcome to week four of our Eredivisie Team of the Week which leads into our Eredivisie ‘Player of the Season’ competition.  All players have performed so well this weekend that Martijn Hilhorst and Will Burns have decided they should be in our team of the week.  Each player in the eleven receives one point and whichever player is declared ‘Player of the Week’, he receives an extra point.

JEROEN ZOET – PSV: Another commanding performance from arguably the best keeper in the league right now.

TIMO LETSCHERT – FC UTRECHT: The Utrecht man seems to realising his potential. Letschert was indispensable at the back in Utrecht’s 2-0 win over FC Groningen.

SANDER FISCHER – EXCELSIOR:  Sander is always a real handful to strikers but against De Graafschap he halted everything fired in his way.

GURAM KASHIA – VITESSE: The big Georgian notched a goal to cap off an excellent show that kept Bart Ogbeche out of trouble.

DAVY KLAASSEN – AJAX: The man-of-the-match in Ajax’s 4-0 thumping of ADO Den Haag. The Amsterdam captain provided a goal and two assists which makes him our PLAYER OF THE WEEK.

DAVY PRÖPPER – PSV: A wonderful assist and winner of a dubious penalty in the big clash against Feyenoord. Looks to be finding his feet in Eindhoven.

ILIASS BEL HASSANI – HERACLES: Bel Hassani snatched the limelight back from last week’s star Oussama Tannane in Almelo. Lead the way scoring the opening goal as Heracles heaped more misery on Twente fans in the 2-0 victory over the Enschede side.

LUUK DE JONG – PSV: The big striker won the majority of his aerial duels against Eric Botteghin and Jan-Arie van der Heijden and continuously held the ball up in the Eindhoven side’s 3-1 win over Feyenoord.

MAXIME LESTIENNE – PSV: A goal and the completely bossing of Sven van Beek that resulted in some good crosses in PSV’s 3-1 win over Feyenoord. Could have more than the one goal. 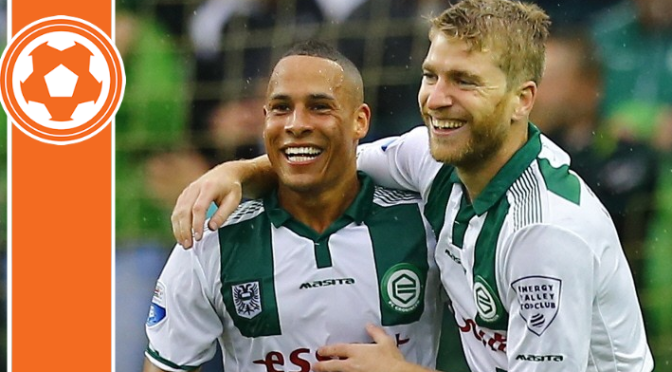 Edwin van der Looi’s FC Groningen continued their winning ways in the Eredivisie with a comfortable 3-1 win over Heracles Almelo writes Will Burns.

Van der Looi named the same side that defeated Go Ahead Eagles 3-2 last weekend as Heracles coach Jan de Jonge selected on-loan striker Denni Avdic, signed from AZ this week, in for Thomas Bruns for the team that were badly beaten 3-0 at home to AZ last Saturday.

The hosts exploded out of the blocks and found themselves a goal up within eight minutes. The three-pronged attack of Jarchinio Antonia, Tjaronn Chery and Danny Hoesen looks like it could be a formidable one this season for Groningen and Hoesen and Chery combined to make it 1-0. Nick van der Velden threaded a lovely ball through to Hoesen which split the Herqacles defence and Hoesen sprayed the ball across the sodden grass into the path of Chery to finish past goalkeeper Dennis Telgenkamp.

Michael de Leeuw replaced the injured Rasmus Lindgren on 33 minutes and then found himself on the scoresheet just two minutes later. Maikel Kieftenbeld hit a 30-yard through ball for De Leeuw to run onto and he finished with ease to double Groningen’s lead.

Moroccan playmaker Ilaiss Bel Hassani looked like Heracles’ best chance of scoring and he did just that with an individual effort on 57 minutes.

Any chance of Heracles comeback was short lived as Yoёll van Nieff slotted home Groningen’s third and final goal on the hour mark with an excellent free-kick from outside the area.

Heracles look like a team in major trouble and De Jonge must get his team to winning ways as soon as possible, starting next week at home to Cambuur.