Welcome to week three of the Total Dutch Football.com Eredivisie Player of the Year tournament. Every week Will Burns and Steve Davies select the best 11 from that week’s action and each player is awarded one point. One member of the team will win the ‘Player of the Week’ award and be awarded two points. Check the current standings here. 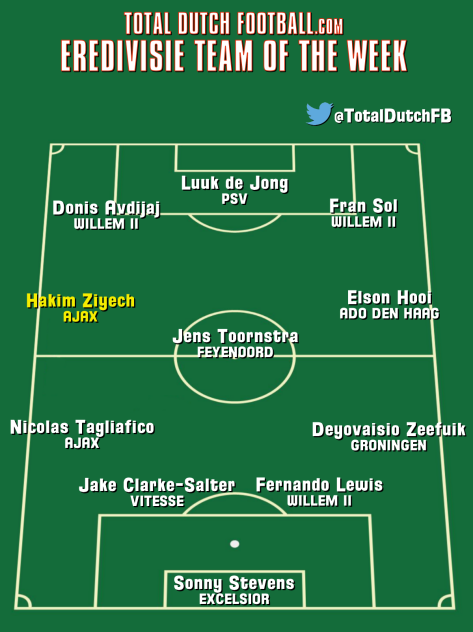 Hakim Ziyech was our standout player of the week. The Moroccan international was influential in the 5-0 drubbing over FC Emmen, torturing the defence with his plays and shots.

Luuk de Jong snatched his first two goals of the season in a last gasp 2-1 win over PEC Zwolle. Three Willem II players made the team. Fernando Lewis, Donis Avdijaj and Fran Sol were the pick of the team that thumped Heracles by five goals to nil.

NAC Breda did not soothe PEC Zwolle’s European hangover with a 3-1 comfortable win in the Rat Verlagh Stadion writes Will Burns.

Breda started the brighter of the two sides with Zwolle looking lacklustre, possibly due to their 3-1 defeat in Prague on Thursday night that knocked them out of the Europa League. However, the visitors did create the first decent chance that Czech striker Tomas Necid missed. Bram van Polen supplied a superb cross from the right-wing and the 6ft 3inch attacker found himself unmarked in the centre, however he embarrassingly put his header wide of Jelle ten Rouwelaar’s post.

On the half-hour mark, PEC Zwolle experienced a major let off as NAC should have really took the lead. From a free-kick deep on the right, Zwolle failed to clear and the ball fell perfectly for Erik Falkenburg but Diederik Boer parried well from close range. The rebound was smashed off the crossbar by Isak Ssewankambo and bounced out.

It was a warning fired at Zwolle which they did not take heed off seven minutes later. On-loan Chelsea striker Stipe Perica finished a great move from Falkenburg’s cross that Ssewankambo nodded down into the Croatian 19-year old to poke home.

Although, Ron Jans made two changes at half-time to fire some life into his side. Jody Lukoki and Joost Broerse replaced Mustafa Saymak and Trent Sainsbury and within five minutes of the restart, Zwolle were level. Jesper Drost and Stef Nijland combined well to set up Necid to grab his first goal for the club.

NAC were not finished by any means and went on the attack and found themselves the lead again on 65 minutes after Van Polen fouled Perica in the area and referee Tom van Sichem awarded a spot-kick. After arguing with Perica on who would take the penalty, Erik Falkenburg converted superbly straight down the middle of Boer’s goal.

The points were sealed by Nebojša Gudelj side’s five minutes from the end with Elson Hooi blasting a shot past Boer after Jeffrey Sarpong had carried the ball forward and laid the substitute in.

A great win for Breda after a disappointing start to the season, but Zwolle will need to pick themselves up after the international break if they wish to compete for European places this year.