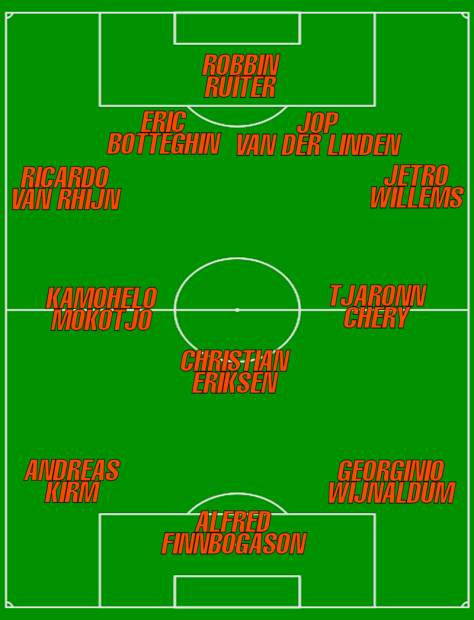 Robbin Ruiter (FC Utrecht) – In between the sticks we have FC Utrecht’s Robbin Ruiter, the 6ft 5in goalkeeper kept his team in the match against Go Ahead Eagles on many occasions and lead his team to a draw.

Ricardo van Rhijn (Ajax) – The right-back scored a wonderful goal for his side in their 3-0 home win against Roda JC.

Eric Botteghin (FC Groningen) – An excellent debut performance from the Brazilian who has just recently moved from NAC Breda earlier this summer.

Jop van der Linden (Go Ahead Eagles) – The 23-year-old showed the Eredivisie what he can do, with an tremendous double block and even smashing the post in the dying seconds of the game with a superb free-kick

PLAYER OF THE WEEK Tjaronn Chery (FC Groningen) – A goal and an assist showed the ADO Den Haag fans what they are missing, currently on a season-long loan at Groningen and will sign permanently in July 2014 when his current deal expires.

Andreas Kirm (FC Groningen) – Like Chery, a goal and an assist that helped Groningen defeat NEC 4-1 on Saturday evening.

Georginio Wijnaldum (PSV) – The new captain of PSV seems to be settling in nicely scoring a brilliantly taken goal against ADO.

Alfred Finnbogason (Heerenveen) – The Icelandic hitman is back to his old tricks, scoring twice in an impressive 4-2 win over AZ Alkmaar.

Thanks to Peter McVitie for his input in selecting the best eleven this week.