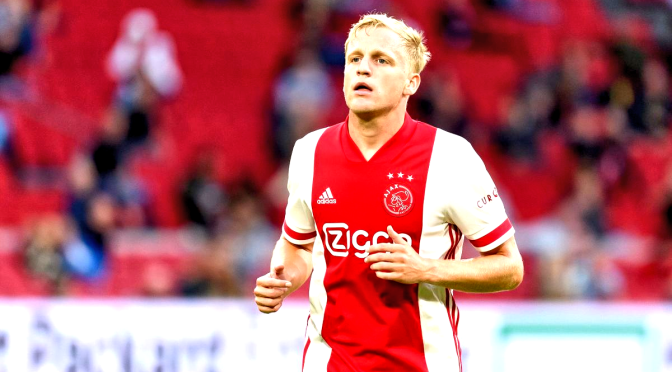 Ajax midfield maestro Donny van de Beek is on his way to Old Trafford to join Ole Gunnar Solskjaer’s Manchester United on a five-year deal. Will Burns explains how Donny can improve the Red Devils.

The 23-year-old Van de Beek has been an influential figure over the last few years at the Johan Cruyff Arena and helped the Amsterdammers reach the semi-finals of the Champions League semi-finals and lift an Eredivisie title in 2018-19 season.

Manchester United have parted with a reported £40m to bring the young Dutchman to the Premier League but can he fit into a midfield which already boasts Paul Pogba and Bruno Fernandes – well yes, I believe he can.

Van de Beek rose through Ajax’s De Toekomst academy until he made his first team debut on 26th November 2015, as a substitute away to Celtic in a 2-1 Europa League victory. By the next season, he cemented his place in the Ajax midfield but it was the 2017-18 season where Donny started to shine.

Scoring eleven times in 34 Eredivisie appearances, Donny started to gain some serious plaudits and was tipped to move into the big leagues in the near future. He managed to supply a further six assists and primarily played as a box-to-box midfielder.  Head coach Erik ten Hag then moved Donny further forward the season after, where the then-21-year-old played in an attacking midfielder role and scored 17 times, with 13 assists in 57 games in all competitions.

His goals and creativity helped Ajax win the league title and the Amsterdammers unexpectedly found themselves one win away from a UEFA Champions League final. Last season, which was abruptly ended due to ongoing global pandemic, Donny shared his time as a number ten role and back into the middle of midfield. He still managed to nab ten goals in 37 appearances with 11 assists before the season was cut short.

As mentioned above, Van de Beek possesses the ability to play as a perfect box-to-box midfielder but he can advance forward or sit in front of the defence.  His versatility has proven that he can be the perfect link between the defence and the attack, and although he is more than adept at sticking a foot in to help out the defence, he is more comfortable going forward. However, defensively he is sound. He averaged 2.2 tackles per game in the Eredivisie last term.

Going forward, time and time again, he has shown that awareness that will see him arrive on the edge of the box late to surprise the opponents. Van de Beek shows a rare intellect with his capability to drift between the lines of the opposition, linking together team mates and finding dangerous space in the final third. The front three at Old Trafford are going to find Donny a joy to play with.

Now the deal has been confirmed, Manchester United fans can get excited that one of the best young midfielders in European football is going to be wearing their red shirt.

Van de Beek is suited to the English game and I can see him initially sitting in a deeper role than he usually used to for Solskjaer’s side.  As experience and knowledge of the Premier League comes to him, then you will see Donny been given the green light to play more advanced.

In a 4-2-3-1 formation, van de Beek could be alongside either Paul Pogba and Bruno Fernandes in the middle and on paper, Man Utd have one of the strongest midfield’s in the league with an exciting young forward line ahead of them.

However, Donny will not be without a fight for places with Nemanja Matic, Fred and Scott McTominay also competing for the central midfield role but long-term, the position will become his own.

2 thoughts on “What does Donny van de Beek bring to Man Utd’s midfield?”