The season’s second round of midweek fixtures got underway on Tuesday evening at the MAC3PARK Stadion where hosts, PEC Zwolle withstood a late comeback from in-form Heerenveen to claim all three points in a five-goal thriller.

Despite having shipped eight goals in their last two outings in all competitions, the home side got off to a perfect start when Wouter Marinus stooped low to head home a Youness Mokhtar cross in the 23rd minute and things would get even better for the hosts just five minutes later when Mokhtar picked out the run of Younes Namli with a perfectly weighted ball that left the visitor’s rear guard powerless to prevent the 23-year-old streaking clear and rounding an exposed Martin Hansen to double his side’s advantage. 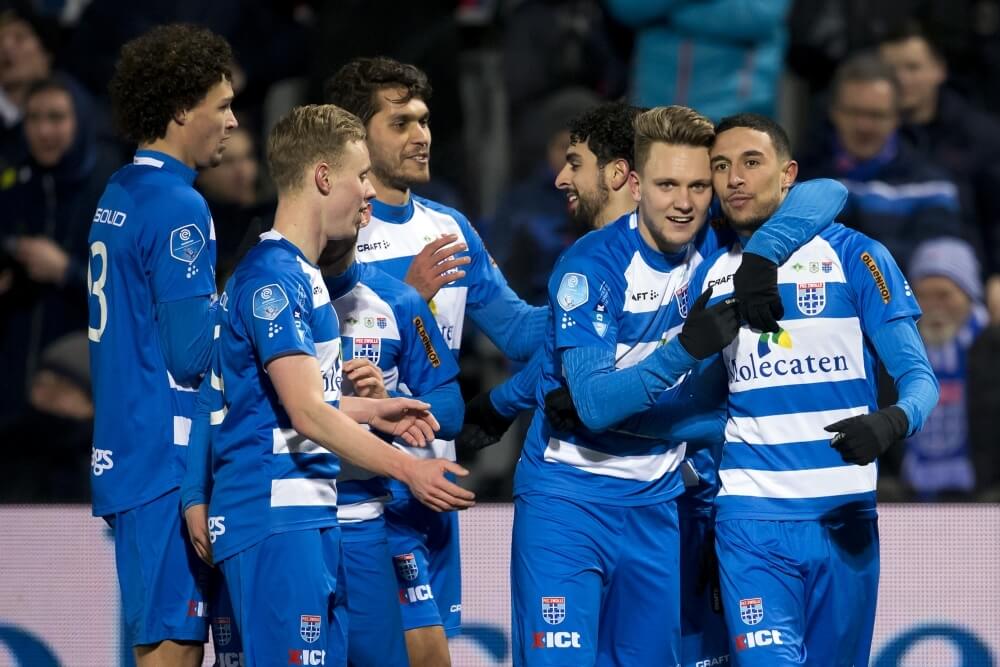 However, having taken seven points from the last nine, the visitors weren’t about to roll over and clawed themselves back into the match in the 69th minute when Arber Zeneli cut in from the left and picked out an untracked Denzel Dumfries for the full back to bag his second goal in his last three outings.

Yet, any hopes the away side may have harboured of making a comeback looked to have been dashed four minutes later when Mustafa Saymak caught Hansen out at his near post with a deceptive drive seconds after the visiting ‘keeper had hared off his line to deny the tricky Mokhtar, who had found himself one-on-one with Heerenveen’s Danish stopper after turning Daniel Høegh inside out following some poor control from Dumfries just outside the area.

Although the hosts would ultimately hold on to snap a three-game losing streak and reclaim fourth place in the standings from Feyenoord ahead of the rest of the mid-week fixtures, a marauding Dumfries would ensure a tense finish and make amends for his earlier error by hitting the by-line and pulling the ball back for an unmarked Reza Ghoochannejhad to reduce the arrears for the visitors ten minutes from time.

Wednesday’s Eredivisie action got underway at the Stadion Galgenwaard where an 85th minute effort from super-sub, Lukas Görtler – just two minutes after the German forward had been brought on to replace Gyrano Kerk, handed Jean-Paul de Jong his first victory since succeeding Erik ten Hag as coach of FC Utrecht at the expense of rock-bottom Sparta Rotterdam.

Meanwhile, with closest challengers, Ajax not playing until later in the night, a 17th minute effort from Hirving Lozano, following a deft back-heel from Luuk de Jong, ultimately proved enough to see PSV Eindhoven past a determined Excelsior to open up a ten-point lead at the top of the standings.

Having weathered an early onslaught by the visitors who had been unlucky not to have taken the lead when Mike van Duinen saw his close-range effort come back off Jeroen Zoet’s crossbar with just six minutes on the clock, the host’s margin of victory might have been greater had Jurgen Mattheij not been in the right place at the right time to block a goal-bound header from Steven Bergwijn on the line eleven minutes before the break.

Elsewhere, in-form AZ Alkmaar recorded their fifth win from their last seven outings in all competitions by hitting an undermanned FC Twente for four at De Grolsch Veste.

However, the visitor’s eventual margin of victory was somewhat misleading as despite taking a tenth minute lead when Iranian international, Alireza Jahanbakhsh converted from the spot shortly after Haris Vučkić had sent Guus Til tumbling in the area, the game could have gone either way until Cristian Cuevas’ was given his marching orders in the 72nd minute by referee, Siemen Mulder after picking up his second caution of the match following a rash challenge on Joris van Overeem.

Despite coming within a whisker of restoring parity when Jonas Svensson cleared a goal-bound effort by Vučkić off the line three minutes before the 22-year-old’s sending off, the visitor’s numerical advantage ultimately told late on when, having already doubled the away side’s advantage in the 89th minute, Wout Weghorst curled his second of the night into the top left hand corner of Joel Drommel’s net a minute into added time before Mats Seuntjens set Jahanbakhsh away to claim his second of the game two minutes later.

In one of the night’s late kick-off’s, Willem II hit VVV Venlo for three to move four points clear of the bottom three.

Despite snatching a famous victory late-on against reigning Eredivisie champions, Feyenoord on Sunday afternoon, VVV were never really in the running in Tilburg and would find themselves a goal down when Bartholomew Ogbeche handed the hosts the lead a minute before the break – the Nigerian stabbing the ball home from close range to claim his tenth of the campaign in all competitions seconds after Damian van Bruggen had sparked a goal-mouth scramble by blocking Jordy Croux’s goal-bound effort on the line and Fran Sol had seen his attempted follow-up strike Lars Unnerstall’s right hand upright.

Buoyed by the 33-year-old’s opener, the home side would emerge for the second half with an added spring in their step and would double their advantage four minutes after the resumption when Ben Rienstra claimed his sixth of the season in all competitions with a low drive from just outside the area before Croux punished Unnerstall for failing to field his corner in spectacular fashion by slamming the ball into an unguarded net from wide on the right in the 53rd minute.

At the same time, there were remarkable scenes at the Rat Verlegh Stadion where struggling NAC Breda hit an undermanned Heracles for six to move three points clear of the bottom three.

Despite coming into this encounter with just one win in their last seven outings, it took the hosts just four minutes to open the scoring when an unmarked Rai Vloet stole in at the back post to volley home an Angelino cross and claim his fifth of the campaign in all competitions.

Indeed, there was little indication of the remarkable scenes that would later unfold when Vincent Vermeij restored parity for the visitors by stabbing home a Roland Baas cross from close range just nine minutes later.

However, having taken just five minutes to restore their advantage when Thierry Ambrose drilled the ball home after a poor punch from Bram Castro had sparked bedlam in the away side’s area following a Manu Garcia corner from the left, the home side would extend their lead five minutes into the second half when, having capitalised on some loose play from Dries Wuytens just inside the home side’s half, Garcia would sprint half the length of the field and leave a number of would-be challengers trailing in his wake before poking home the host’s third from just outside the box.

Any hopes the visitors may have harboured of staging a comeback were dispelled sixteen minutes from time when Tim Breukers was given his marching orders by referee, Kevin Blom after picking up his second caution of the match following a rash lunge on Garcia.

It would take the home side just four minutes to make their numerical advantage count when Mounir El Allouchi picked out an unmarked Mitchell te Vrede on the edge of the box to slide number four past an exposed Castro as the visitor’s looked in vain for a flag which never came.

Having teed up the home side’s fourth, following a nice give-and-go with freshly recruited Roma loanee, Umar Sadiq, who had only been on the field for two minutes, El Allouchi would cap a mazy run by increasing the home side’s advantage three minutes later.

Not content with merely registering an assist on his debut, the Nigerian forward would put the seal on a remarkable performance by Stijn Vreven’s side by posting his first goal in NAC colours after being sent clear by an incisive through ball from Ambrose just two minutes later.

There was little to cheer for another struggling side however as Ajax came from a goal down to hit Roda JC for four at the Parkstad Limburg Stadion.

With the game just two minutes old, the hosts were gifted the perfect start when Andre Onana palmed a Mikhail Rosheuvel cross into the path of Feyenoord loanee, Simon Gustafson, whose shot just about crossed the line before the intervention of a covering Frenkie de Jong.

However, just nine minutes later, the visitors would claw themselves back onto level terms when a marauding Nicolas Tagliafico cut the ball back for Donny van de Beek to poke home his eleventh of the campaign in all competitions before a spectacular 24th minute drive from well outside the area by Hakim Ziyech put the away side into a lead they wouldn’t relinquish.

Erik ten Hag’s men would extend their lead further sixteen minutes from time when van de Beek slipped Klaas-Jan Huntelaar in behind the home defence with an incisive through ball for the former Dutch international to round Hidde Jurjus and claim his ninth of the season.

However, just when it appeared as though the points were heading back to Amsterdam, a slip by Frenkie de Jong allowed Maecky Ngombo to hit the by-line and cut the ball back for second half substitute, Jorn Vancamp to side-foot home his third goal in his last four appearances in all competitions ten minutes from time.

Yet, any hopes the home side may have harboured of snatching a late share of the spoils were dispelled just two minutes later when Tagliafico capped another raid into the home side’s area by picking out an unmarked Huntelaar for the 34-year-old to stroke home his second of the night from just outside the box.

Thursday’s Eredivisie action began with ADO Den Haag narrowly edging out fellow European hopefuls, Vitesse Arnhem to move within three points of their guests (who currently occupy the last of the UEFA Europa League play-off places) after a swift counter attack, set in motion by the vision of Abdenasser El Khayati, was capped off by a streaking Sheraldo Becker nine minutes into the second half at the Cars Jeans Stadion.

The twenty second round of action was concluded at De Kuip where three second half goals saw reigning champions, Feyenoord get back to winning ways at the expense of visiting, FC Groningen.

Despite the eventual result it was the visitors who would come closest to breaking the deadlock in a goalless opening period when a Yoell van Nieff free kick cannoned back off Brad Jones’ crossbar with just three minutes on the clock.

However, having failed to record a victory since Christmas Eve, when an untracked Jens Toornstra ghosted in at the back post and volleyed home a perfectly weighted cross from first half replacement, Bilal Başaçıkoğlu to open the scoring for the hosts eight minutes into the second half, Ernest Faber’s troops never really looked like getting back into the game and when Steven Berghuis slipped in a marauding Jeremiah St. Juste to double the home side’s advantage eighteen minutes from time any hopes the visitors may have harboured of mounting a comeback began to fade.

Having been restricted to late cameo appearances since his return to Rotterdam at the end of January, it took Robin van Persie a matter of seconds to make his presence felt when, just seconds after replacing Jens Toornstra in the 78th minute, a neat give and go with Berghuis allowed the 34-year-old to evade the attentions of van Nieff and curl the ball beyond the reach of Sergio Padt to notch his first Eredivisie goal since re-signing for the club thirteen years and three hundred and fifty-eight days after his last strike in the Dutch top flight.