Despite being handed a late cameo as an 81st minute replacement, Robin van Persie’s long-awaited Feyenoord return ultimately ended in disappointment as the reigning Eredivisie champions were held to a frustrating draw in their rearranged Round 15 clash with FC Utrecht at the Stadion Galgenwaard on Wednesday evening.

Things appeared to be going the way of Giovanni van Bronckhorst’s side when a speculative effort by Sam Larsson from just outside the area left David Jensen grasping at thin air after the ball took a wicked bounce on its way into the back of the host’s net with twenty-three minutes on the clock.

However, the away side would ultimately have to be content with a point after Gyrano Kerk capitalised on some ponderous play by Renato Tapia to steal in behind the visitor’s back line and beat an exposed Brad Jones four minutes before the break.

The twentieth round of Eredivisie action got underway on Friday evening in Friesland where Heerenveen came from behind to condemn rock bottom Sparta Rotterdam to an eighth straight loss.

Despite tasting defeat in each of his two outings thus far as Sparta coach, things were looking up early on for Dick Advocaat, whose side got off to the perfect start when Julian Chabot nodded in a Fred Friday flick on from close range following a corner from the left with just two minutes gone.

However, the home side would restore parity on the quarter hour mark when a marauding Arber Zeneli picked out an unmarked Reza Ghoochannejhad, who capped off a swift counter attack by tapping the ball home from close range.

In a game that could have gone either way it was the hosts who would ultimately bag the points when former Sparta defender, Denzel Dumfries cut in from the right and caught out Leonard Nienhuis with a fierce drive to the visiting ‘keeper’s near post twenty minutes into the second half to leave his old club rooted to the foot of the standings and his current employers a point outside the UEFA Europa League play-off places.

Saturday’s Eredivisie action got underway with a six-goal thriller in Groningen.

Despite edging their way into the lead twenty-eight minutes in when Jesper Drost nodded the ball into the path of Tom van Weert for the former Excelsior marksman to volley home his sixth of the campaign in all competitions, the host’s advantage would last just six minutes when a quickly taken free kick by Brahim Darri allowed Jamiro Monteiro to steal a march on the home side’s rear guard before beating Sergio Padt with a low drive from just inside the area to claw visiting, Heracles back on level terms.

However, the hosts would restore their advantage two minutes before the break when Bram Castro could only parry a low cross from Mimoun Mahi into the path of Drost, who gleefully slotted the ball home from just outside the box before extending that lead further when an incisive through-ball from Ritsu Doan sent Mahi away to turn Dries Wuytens inside out before firing the ball beyond an exposed Castro to claim his seventh of the season in all competitions on the stroke of half time.

The points appeared to be going the way of the home side until eighteen minutes into the second half when Brandley Kuwas hit the by-line and cut the ball back for an untracked Vincent Vermeij to pull John Stegeman’s side back into the game.

The visitors would complete the comeback when an over-hit cross from Robin Pröpper found the inside of Padt’s right hand upright twelve minutes from time. 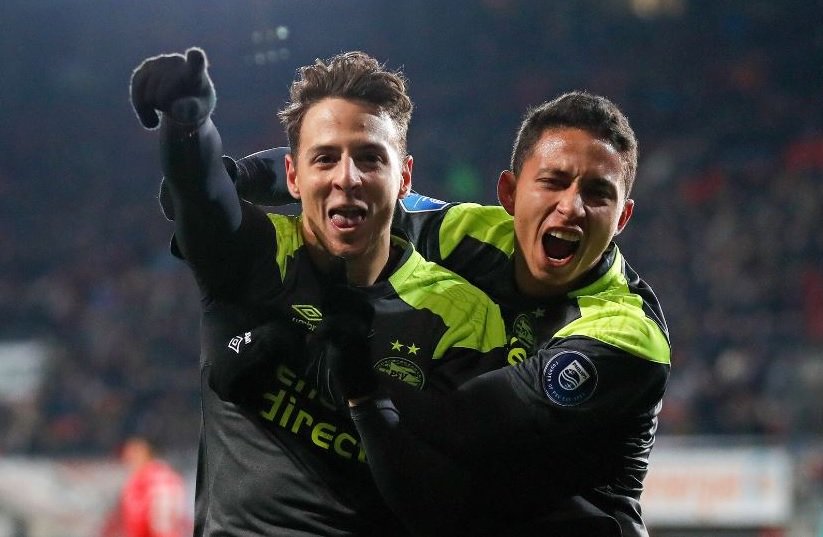 Elsewhere, a fifth-straight victory in all competitions saw PSV Eindhoven extend their lead at the top of the table to eight points ahead of the rest of the weekend’s fixtures.

It took Phillip Cocu’s men just four minutes to break the deadlock in Enschede – Mexican international, Hirving Lozano nodding home a Steven Bergwijn cross at the back post to bag his fourteenth of the campaign in all competitions.

Despite their precarious league position, FC Twente kept their table-topping guests in sight until the last minute of normal time when an incisive through-ball from substitute, Mauro Junior sent a marauding Santiago Arias clear to stab the ball past an exposed Joel Drommel from just outside the box.

Buoyed by having taken four points from their last six, it was the visitors who were first to strike at the MAC3PARK Stadion when Bryan Linssen showed some remarkable skill to flick a Thomas Bruns cross over his head before firing the ball low and hard past a static Diederik Boer to claim his ninth of the campaign in all competitions from just inside the area.

However, the hosts would claw their way back onto level terms thirteen minutes into the second half when a speculative Younes Namli effort from well outside the area caught out Remko Pasveer in the visitor’s net.

With the game seemingly headed for a draw, it was Chelsea loanee, Mason Mount who ultimately proved the difference when the 19-year-old unleashed a looping free kick that left Boer grasping at thin air to snatch all three points for Henk Fraser’s side fifteen minutes from time.

Things might have been different for the hosts had second half substitute, Stef Nijland’s volley from just inside the area found the back of the net instead of clipping the outside of Pasveer’s left hand upright four minutes from time.

Saturday’s Eredivisie action was concluded at the Rat Verlegh Stadion where a Lennart Thy strike seventeen minutes from time saw visiting, VVV Venlo claim all three points at the expense of struggling, NAC Breda.

Things might have been different for the hosts had a flicked header from Rai Vloet following an Angelino free kick found the back of Lars Unnerstall’s net instead of coming back off the visiting ‘keeper’s right hand upright just three minutes earlier.

Yet the visitors might have snatched the points late on had Donny van der Beek’s goal-bound effort not been blocked by Ramon Leeuwin and Justin Kluivert’s follow-up not been headed off the line by a covering Rico Strieder after David Jensen had fumbled a Lasse Schone corner six minutes from time.

However, while there may have been no fireworks on the field of play the sparks were certainly flying off it when the already substituted, Lukas Görtler was given his marching orders by referee, Danny Makkelie a minute into added time after the previously booked German forward refused to give Justin Kluivert the ball after it had gone out for a throw in.

Elsewhere, a Dani Schahin effort six minutes into the second half ultimately proved enough to see Roda JC end a run of five league games without a win at the expense of an undermanned Excelsior.

Despite the end result, things had begun promisingly for the visitors when Milan Massop headed home a Hicham Faik free kick to open the scoring in the 16th minute.

However, the hosts, who began the day just a point above bottom-of-the-table Sparta Rotterdam, would restore parity on the stroke of half time when Mikhail Rosheuvel slipped in Jorn Vancamp for the man on loan from Anderlecht to claim his first of the campaign.

Buoyed by Vancamp’s leveller, the home side would emerge for the second half with an added spring in their step and edge themselves into what would ultimately prove to be an unassailable lead just six minutes after the restart when a pinpoint cross from Rosheuvel found the head of Dani Schahin, who beat Theo Zwarthoed to claim his eighth goal of the season in all competitions.

However, the visitors weren’t quite finished yet and might have claimed a share of the spoils had Stanley Elbers found the back of the net instead of clipping the outside of Hidde Jurjus’ right hand upright with the home ‘keeper stranded and the goal gaping following a lung-bursting run and cut-back by Mike van Duinen fourteen minutes from time.

With the points slipping away and time running out, the visitor’s misery was compounded further when Luigi Bruins received his marching orders from referee, Martin Perez after picking up his second booking of the match following a rash lunge on Donis Avdijaj.

Meanwhile, second half goals from Tonny Vilhena, Steven Berghuis and Jens Toornstra saw Feyenoord get back to winning ways at the expense of visiting, ADO Den Haag.

Following a dour opening period in which the only real chance of note saw the returning Nicolai Jørgensen strike the foot of Robert Zwinkels’ right hand upright in the 24th minute, it was the hosts who took the game by the scruff of the neck nine minutes into the second half when an untracked Tonny Vilhena headed home a Steven Berghuis cross at the back post.

Giovanni van Bronckhorst’s side would go on to double their advantage in the 68th minute when Steven Berghuis curled the ball home from just outside the area seconds after a goal-bound effort from Jørgensen had been blocked on the line by Elson Hooi.

However, just when it appeared that the game was slipping away from Alfons Groenendijk’s side, an attempted clearance by Sven van Beek, following a corner by Abdenasser El Khayati, fell invitingly for former Feyenoord man, Lex Immers to volley the visitors right back into the game nineteen minutes from time.

Yet, having taken just one point from a possible six since the turn of the year, the reigning Eredivisie champions were in no mood to allow more points to slip through their fingers and, ten minutes from time the hosts sealed the win when a neat give and go between Berghuis and Jens Toornstra ended with the latter squeezing the ball between the fingers of an exposed Zwinkels from mid-way inside the area.

The twentieth round of Eredivisie action was concluded in Tilburg where two goals inside the opening quarter of an hour set AZ Alkmaar on the road to victory against Willem II.

Having taken just six minutes to break the deadlock when a perfectly weighted through-ball from Alireza Jahanbakhsh sent Mats Seuntjens clear to slot the ball past an onrushing Mattijs Branderhorst, the away side would go on to double their advantage just eight minutes later when Oussama Idrissi set the Iranian international away to claim his ninth of the campaign in all competitions.

The hosts believed they had reduced the arrears two minutes before the break when a header from Bartholomew Ogbeche, that was blocked by the left shoulder of a covering Seuntjens, appeared to have crossed the line.

However, despite replays clearly showing this to be the case, the home side’s appeals fell on deaf ears and, try as they might, there was no way back for Erwin van de Looi’s men thereafter as the visitors held out to cut the gap between themselves and second-placed Ajax to three points.