Feyenoord’s first appearance in the group stage of the UEFA Champions League for fifteen years swiftly turned into a nightmare on Wednesday night as the reigning Eredivisie champions were hit four by a merciless Manchester City in front of a stunned De Kuip.

Despite coming into the clash with Pep Guardiola’s star-studded Citizens on the back of a 100% start to the campaign, coach, Giovanni van Bronckhorst was unable to call upon a number of key faces including star striker, Nicolai Jørgensen, who limped off in the early stages of Feyenoord’s win over Heracles on Saturday evening with a hamstring problem.

As a result, the hosts adopted an unfamiliar 5-2-3 formation with van Bronckhorst, as expected, recalling centre half, Eric Botteghin after the Brazilian sat out Saturday’s trip to Almelo while also somewhat surprisingly favouring Sofyan Amrabat in the starting XI over Kevin Diks and Jens Toornstra, who were dropped to the bench.

Having hit Liverpool for five last time out and boasting an unbeaten record of their own thus far this term, Guardiola’s men arrived in Rotterdam in confident mood, determined to erase the memory of last season’s round of 16 exit from European club football’s elite competition at the hands of Monaco on the away goals rule.

This determination was clear for all too see as the visitors broke the deadlock in just the second minute of the match – John Stones out-jumping Jan-Arie van der Heijden to direct a David Silva cross from the left beyond both Feyenoord ‘keeper, Brad Jones and Tonny Vilhena, who failed to clear the England international’s headed effort off the line despite being perfectly placed to do so at the back post.

With the hosts rocking on their heels in front of a stunned home crowd, the away side soon threatened to double their advantage and very nearly did so just five minutes after taking the lead. However, Botteghin was on hand to snuff out the danger by heading compatriot, Gabriel Jesus’ looping goal-bound header off the line and over the bar after Jones was left rooted to the spot.

Having escaped by the skin of their teeth just three minutes earlier, Feyenoord did fall further behind ten minutes in when, having gotten free down the right, England international full back, Kyle Walker found Sergio Agüero on the edge of the box who, having escaped the attentions of his would-be marker, Botteghin, fired the ball beyond an exposed Jones to double the away side’s advantage.

Despite having been put firmly under the cosh for the opening twenty minutes of the contest the home side did eventually show signs of life when Jean-Paul Boëtius slipped Michiel Kramer in behind the City back line only for the man filling in for the injured Jørgensen to see his effort turned behind by visiting ‘keeper, Ederson, who was sporting a skull cap to protect extensive facial injuries sustained during a horrific clash with Sadio Mane in his side’s Premier League thrashing of Liverpool on Saturday.

However, any hopes the hosts may have harboured of staging a dramatic fight-back were dispelled in the twenty fifth minute when Jones could only parry a vicious low drive from Benjamin Mendy into the path of an unmarked Gabriel Jesus, who was left with the simple task of tapping the ball into an unguarded net as the home side appealed in vain for offside.

With the visitors firmly in control tempers began to fray amongst the home side with Jerry St. Juste, Kramer and Vilhena all going into the book of Polish referee, Szymon Marciniak as the temporary respite of the interval approached. 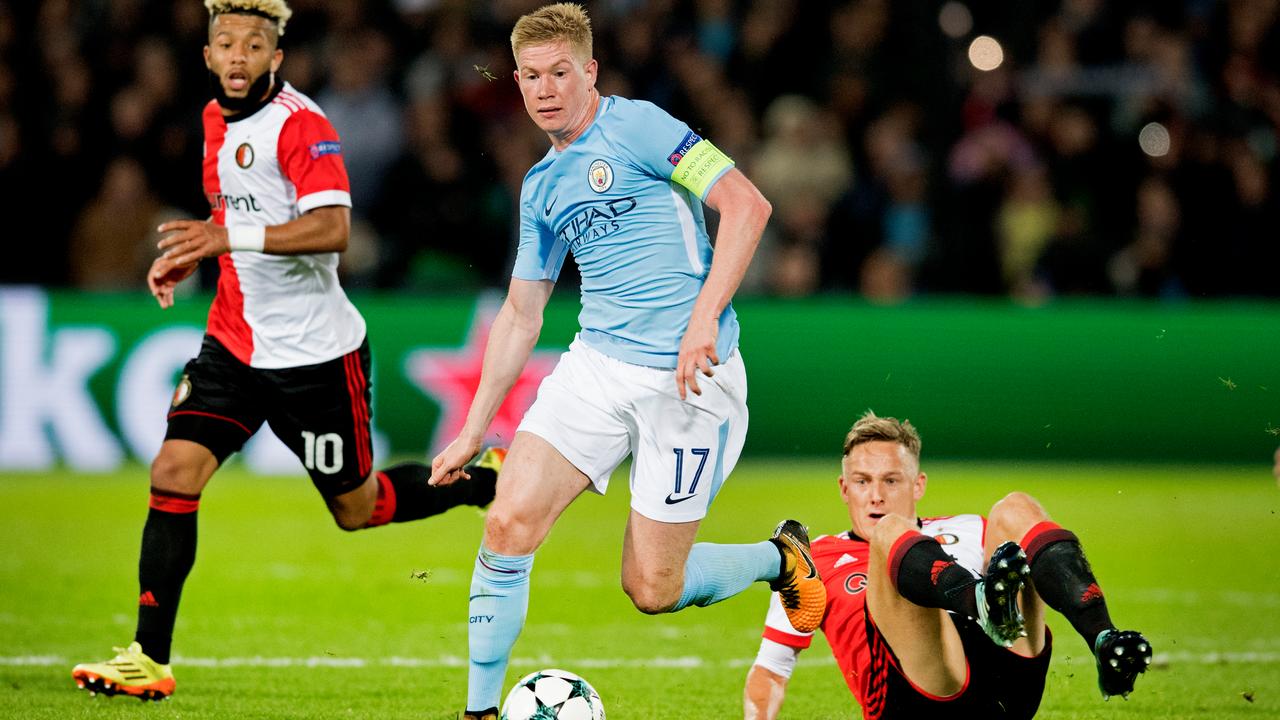 Despite Guardiola’s side noticeably easing off the throttle after the break as they turned their attention towards a potentially tricky trip to Watford on Saturday, their hosts never really looked like getting onto the scoresheet and with the visitors threatening to further extend their advantage with every attack, it came as little surprise when the away side made it four and effectively ended the game as a contest shortly after the hour mark – Stones heading home his second of the night from close range with sixty three minutes on the clock after being picked out by Kevin De Bruyne following a neat give-and-go between the Belgian international and David Silva on the left.

Having been thoroughly out-played in front of their own fans, Giovanni van Bronckhorst’s side face a daunting trip to Naples on 26th September in their next UEFA Champions League engagement.

But before that hurdle comes one of the showpiece encounters of the Dutch season as Feyenoord make the trip to Eindhoven to face PSV on Sunday – a game which offers van Bronckhorst’s charges a welcome opportunity to erase the memory of what was an underwhelming performance in the club’s first UEFA Champions League group stage fixture for fifteen years.