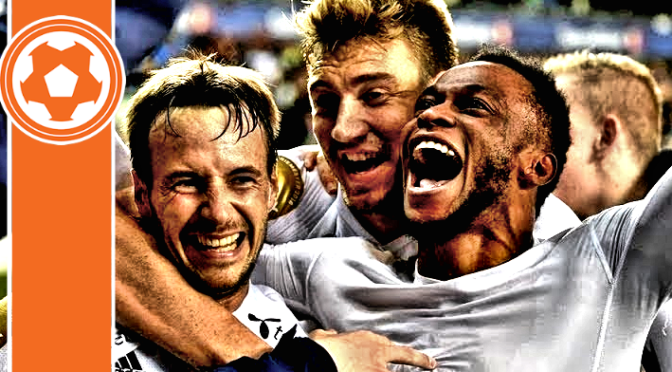 A late brace from super-sub, Samuel Adegbenro sealed Norwegian champions, Rosenborg BK’s place in the group stage of the UEFA Europa League and, at the same time, consigned four-time European champions, Ajax to a season without continental competition.

Having seen their visitors escape with an undeserved one-goal advantage after their initial meeting in Amsterdam a week earlier, Ajax wasted little time in attempting to claw themselves back on level terms as a poorly judged back-pass from left back, Birger Meling almost inadvertently played in Kasper Dolberg – home ‘keeper, Andre Hansen being forced to scramble to deny Ajax’s Danish starlet on the edge of his box with just two minutes on the clock.

Ajax coach, Marcel Keizer had opted to rest both Dolberg and Lasse Schone during Sunday’s victory over Groningen before restoring both to the starting XI here and with Dolberg having already gone close early on, five minutes later, a swift counter-attack from the visitors culminated in Schone teeing up Hakim Ziyech, whose low drive from the edge of the area was clawed behind by the Rosenborg glovesman.

However, despite the visitor’s early dominance, history soon repeated itself as the home side took the lead with their first real attack of note when, having been found in acres of space on the right by skipper, Mike Jensen, Fredrik Midtsjø picked out an unmarked Nicklas Bendtner at the back post, whose diving header past an exposed Andre Onana broke the deadlock on the evening and doubled the host’s advantage in the tie overall with twenty five minutes gone.

Having taken the tie by the scruff of the neck, the hosts very nearly added a second when Yann Erik de Lanlay cut in from the left and was inches away from picking out a sliding Bendtner at the back post eight minutes before the break.

With elimination staring them in the face, the visitors wasted little time attempting to reduce the arrears following the interval – half time substitute, Klaas-Jan Huntelaar being denied by the outstretched right leg of the onrushing Hansen after a long ball from Ziyech had split the home defence and set the veteran marksmen through on goal.

The away side continued to press with both Nick Viergever and Schone going close early in the second half before Ziyech saw his drive from range palmed over the bar by Hansen in the 59th minute.

From the resultant corner the ball was worked, via Mitchell Dijks, to the opposite flank before Joel Veltman’s dinked cross from the edge of the area found an unmarked Amin Younes, who slotted the ball past a scrambling Hansen from just outside the box to bring Ajax back into the tie on the hour mark.

Remarkably, just a minute later the visitors edged ahead on aggregate by virtue of the away goals rule – Younes cutting inside Midtsjø before hitting the by-line and picking out the late run of an untracked Schone at the back post with a pinpoint low cross which the Dane swept past Hansen to put the away side ahead both on the night and in the tie overall.

Anders Konradsen quickly attempted to redress the balance for the shell-shocked hosts – the 27-year-old’s drive from well outside the area cannoning off Onana’s left hand upright three minutes later.

However, it was the away side who looked the most likely to add another and fifteen minutes from time Hansen had to be on his toes once more to deny second half, substitute, Vaclav Cerny who, having got the jump on Meling, saw his effort turned aside by the Norwegian ‘keeper at his near post.

The visitors continued to search for a knock-out blow and, just two minutes later, went even closer as Younes, having evaded the attentions of Konradsen, saw his curling effort from just outside the area clip the outside of Hansen’s left hand upright.

Having drawn a blank in the 1st leg, Kare Hedley Ingebrigtsen had turned to substitute, Samuel Adegbenro – whose subsequent strike thirteen minutes from time had handed the Norwegian champions the advantage ahead of this return encounter, and twenty-two minutes from time the Rosenborg coach turned to the Nigerian forward once more.

Remarkably, the switch again proved an inspired one as the 21-year-old soared above Matthijs de Ligt and Viergever at the back post to head an in-swinging cross from de Lanlay past a static Onana – levelling the scores on the evening and edging the home side ahead once more in the tie overall, ten minutes from time.

Incredibly, a minute from time, the Nigerian then capped an astonishing one-man rescue act – capitalising on a slip from Schone before evading the attentions of both second half substitute, Deyovaisio Zeefuik and Ajax skipper, Veltman to fire the ball beyond Onana and seal Rosenborg’s place in the group stage of the UEFA Europa League while condemning the side that graced the final of last year’s tournament to a season without any form of continental competition.