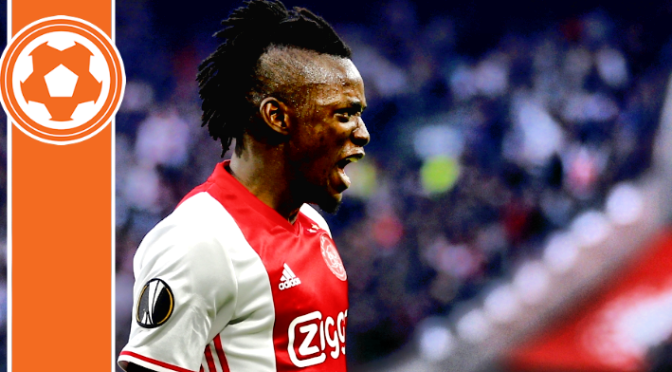 A brace from Chelsea loanee, Bertrand Traore helped Ajax hit Olympique Lyonnais for four in the first leg of their UEFA Europa League semi-final tie at the Amsterdam ArenA on Wednesday evening to leave the four-time European champions with one foot in the final of a major continental competition for the first time in twenty one years.

Despite the French side bagging a valuable away goal through a second half strike from Mathieu Valbuena, Ajax’s three-goal cushion sees Peter Bosz’s side head into next Thursday evening’s 2nd leg at the Parc OL very much in the driving seat.

With late strikes from first, Nick Viergever and then Amin Younes in the second half of extra time in Gelsenkirchen having seen Ajax clinch a first semi-final berth in continental competition in two decades, a subsequent loss in Eindhoven at the hands of outgoing back-to-back champions, PSV last time out had seen Bosz’s troops fall four points off the pace of league leaders, Feyenoord – who, with just two games of the domestic season left to play in the Netherlands, now seem certain to clinch their first Eredivisie crown since 1999, Ajax’s focus now centred on reaching the final of a European club competition for the first time since the then defending champions had narrowly lost out to Juventus following an agonising penalty shoot-out in the final of the UEFA Champions League at Rome’s Stadio Olimpico in 1996.

Remarkably, Ajax had managed to clinch a place in the last four of Europe’s second tier club competition despite having been reduced to ten men during the 2nd leg of their quarter final tie in Germany – Joel Veltman having been given his marching orders after the Dutch international had picked up a second yellow card for blocking the run of Algerian international, Nabil Bentaleb mid-way inside the visitor’s half ten minutes from time. As a result, both he and Viergever – who accrued one booking too many in Gelsenkirchen, were forced to watch the 1st leg from the stands with Jairo Riedewald and Kenny Tete drafted in as cover.

Having eventually seen off the challenge of Turkish champions, Besiktas following an epic penalty shoot-out – Lyon’s quarter final tie having ended 3-3 on aggregate after Bruno Genesio’s side had slipped to a 2-1 defeat in the 2nd leg at the Vodafone Arena in Istanbul, the French side arrived in the Netherlands somewhat understrength with talismanic forward, Alexandre Lacazette only deemed fit enough for a place on the bench.

However, it was the away side who made much of the early running and Genesio’s side went close to taking the lead with just ten minutes on the clock when, having stolen a march on Davinson Sanchez, Maxwel Cornet’s sliding effort from close range was turned behind by a smart save by Andre Onana after Lucas Tousart had picked out the 20–year-old on the edge of the box with a sharp cut-back from the by-line.

Following a sluggish start to proceedings the home side suddenly came to life in the 25th minute and hit the front via the deftest of touches from Bertrand Traore – the Chelsea loanee glancing home a Hakim Ziyech free kick from the right which left Lyon ‘keeper, Anthony Lopes rooted to the spot.

Eleven minutes before the interval the hosts doubled their advantage when, having shown Mouctar Diakhaby a clean pair of heels, Danish starlet, Kasper Dolberg punished a poor clearance by Lopes that had only managed to find the head of Traore – whose vision had initially put the 19-year-old in the clear, by rifling home his twentieth goal in all competitions this term.

The home side could have enjoyed a three-goal advantage at the break but, having unlocked the visiting defence once more via a crisp give-and-go between both he and Ajax skipper, Davy Klaassen, Amin Younes was then denied by the reflexes of Lopes with a minute of the half remaining.

Having very nearly been made to pay for failing to put quarter final opponents, Schalke 04 to the sword during a dominant 1st leg display in the previous round, Bosz’s side emerged for the second half with purpose and added a third four minutes after the resumption when an incisive through ball from Ziyech found Younes with time and space to beat both Lopes and the best efforts of Diakhaby – whose clearance from behind the line came a split second too late.

The home side could have put the tie to bed three minutes later but, having dispossessed Nicolas Nkoulou just inside the visitor’s half, Dolberg saw his venomous effort from range repelled by Lopes, who, five minutes later, was again called into action – the Portuguese international this time turning away a Traore drive from the right edge of the area.

With a proverbial mountain to climb, the away side eventually showed signs of life and bagged a valuable away goal when Mathieu Valbuena rifled home from just inside the area after the home side failed to deal with a Christophe Jallet cross from the right in the 66th minute.

Genesio’s side had enjoyed their last encounter with Dutch opposition – having hit AZ Alkmaar for eleven over two legs earlier in the competition and, buoyed by Valbuena’s strike, the away side could have bagged a second just two minutes later but for the quick thinking of Onana who was out smartly to deny Nabil Fekir after substitute, Rachid Ghezzal had put the 23-year-old in the clear with only the Cameroonian to beat.

However, backed by a raucous home crowd which included the man who masterminded the club’s triumph in the competition (under its previous guise as the UEFA Cup) in  1992 before guiding Ajax to UEFA Champions League glory three years later – Louis van Gaal, the home side set themselves on track to emulate the club’s last ‘Golden Generation’ by restoring their three-goal cushion nineteen minutes from time when Ziyech teed up the home side’s star man, Traore for a close range finish with a rifled cross from the left after the Moroccan international’s unchecked run had initially been found by a perfectly weighted chip over the visitor’s back line by Klaassen.

Man of the Match: Bertrand Traore.