The fifteenth round of Eredivisie action got underway on Friday evening at the Polman Stadion in Almelo where Heracles made it three wins from their last four thanks to a goal from Lerin Duarte seven minutes before the break and a strike from in-form Swedish marksman, Samuel Armenteros, who netted his fifth goal in his last four outings seven minutes before the end to send NEC Nijmegen home empty handed. 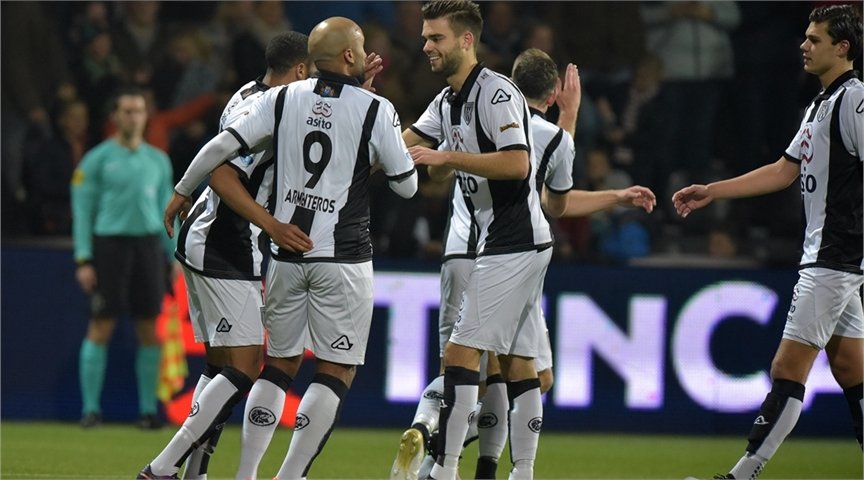 Despite their disparity in the standings, both sides came into this encounter with just one win in their last five league outings and, surprisingly, it was the hosts who came out of the blocks the quicker – Darren Maatsen giving Pelle van Amersfoort the slip just outside the area before curling the ball delightfully around the despairing dive of visiting ‘keeper, Erwin Mulder to put the home side into the ascendancy with just seven minutes on the clock.

However, despite their remarkable victory over league leaders, Feyenoord on 6th November, Hans de Koning’s side have found points hard to come by – losing six of their last seven matches in all competitions and the home side were pegged back just thirteen minutes later when Sam Larsson found Reza Ghoochannejhad with an abundance of time and space on the left hand side of the host’s area – the Iranian international lifting the ball over the onrushing Theo Zwarthoed to restore parity.

The newly promoted Deventer outfit have, more often than not, found things a bit of an uphill struggle this term as they attempt to breach the inevitable gulf in class. But de Koning’s charges can also point to a number of occasions where lady luck has been noticeably absent – not least when Jurgen Streppel’s side took the lead seven minutes later when, following a Heerenveen corner, Eagles’ left back, Rochdi Achenteh’s attempted clearance was sliced across the face of the host’s goal to an unmarked, Ghoochannejhad, who made no mistake with the goal at his mercy.

The visitors added a third when Japanese international, Yuki Kobayashi found himself in the right place at the right time to tuck in the rebound from just outside the box after Arber Zeneli had initially rattled Zwarthoed’s right hand upright on the stroke of half time.

The home side rallied after the break but failed to make the breakthrough – Xandro Schenk having a penalty appeal waved away by referee, Allard Lindhout just after the resumption before PSV loanee, Marcel Ritzmaier rattled the frame of Mulder’s goal twelve minutes from time.

Stanley Elbers gave the home side the lead with just nine minutes on the clock before Robert Muhren levelled for the visitor’s just two minutes later with his third goal in his last two league matches.

Nigel Hasselbaink restored the lead for Mitchell van der Gaag’s side from the spot on 26 minutes, but the sides would go into the interval on level terms when Muamer Tankovic netted eight minutes later.

Hicham Faik’s fourth goal of the season twenty minutes into the second half looked to have sealed the home side’s second win in three league games until Stijn Wuytens popped up to earn John van den Brom’s side a share of the spoils fourteen minutes from time.

Elsewhere on Saturday evening, with Tuesday’s crucial UEFA Champions League showdown with FC Rostov occupying the thoughts of Phillip Cocu, reigning champions, PSV Eindhoven continued to stutter their way through the defence of their title as they were held goalless by relegation-threatened, Roda JC at the Parkstad Limburg Stadion.

Saturday’s Eredivisie action was concluded at the GelreDome where Vitesse Arnhem posted their first league victory since recording a narrow home success over Groningen on 1st October following a 3-1 win over PEC Zwolle.

A penalty from Chelsea loanee, Lewis Baker put the home side ahead just after the half hour mark before Yuning Zhang doubled the host’s advantage four minutes before the break.

Bart Schenkeveld brought Ron Jans’ side back into the contest on 67 minutes to give the relegation-threatened visitors renewed hope that they could take something from the encounter until another man on loan from Stamford Bridge, Nathan, ensured the points would stay in Arnhem a minute into added time.

Sunday’s Eredivisie action got underway at the Kyocera Stadion in The Hague where FC Utrecht made it eight matches without defeat by dispatching ten-man, ADO Den Haag.

Nacer Barazite had given the away side the lead just short of the half hour mark before Tom Beugelsdijk saw red following his second caution of the game with a quarter of an hour remaining. After which, Eric ten Hag’s men exploited their numerical superiority – adding a second through French talisman, Sebastien Haller with seven minutes left to play to inflict the host’s third defeat in as many matches.

Elsewhere on Sunday afternoon, Willem II picked up another important point in their battle to avoid the drop as they held high-flying FC Twente goalless in Tilburg.

Erwin van de Looi’s side have now taken five points from a possible nine in their last three league games to edge themselves two points clear of the bottom three.

With a crucial UEFA Europa League clash against Fenerbahçe on the horizon on Thursday evening, league leaders, Feyenoord had to focus on domestic matters as they played host to local rivals, Sparta Rotterdam.

This was the first Eredivisie clash between the two cross-city adversaries in just short of seven years and a vital one for the hosts who were looking to pull three points clear of bitter rivals, Ajax who played host to Groningen a few hours later on Sunday afternoon.

The home side wasted little time in stamping their authority on the contest and took the lead in the 24th minute – an Eljero Elia cross from the left was poorly dealt with by Sparta’s 17-year-old left back, Rick van Drongelen whose clearance presented the ball to Tonny Vilhena who unleashed a dipping drive from just outside the area that left visiting ‘keeper, Roy Kortsmit grasping at thin air.

Giovanni van Bronckhorst’s men doubled their advantage two minutes before the interval – Jens Toornstra working a quick give and go with Rick Karsdorp on the right before meeting the Feyenoord right back’s deft back heel with an audacious half volley that sailed over the helpless Kortsmit into the back of the net.

Karsdorp and Toornstra were involved again in the host’s third of the afternoon which arrived just short of the hour mark – the newly minted Dutch international sliding in Toornstra on the right whose pinpoint cross found Nicolai Jorgensen who made no mistake – trebling the home side’s advantage from point black range.

Jorgensen was on hand once more to roll in the Rotterdam giant’s fourth goal of the afternoon from the edge of the area just five minutes later before an emotional Eric Botteghin paid tribute to those lost in the tragic plane crash that claimed the lives of, amongst others, the players and staff of Brazilian club, Chapecoense after heading home a left wing cross from fellow centre half, Jan-Arie van der Heijden in the 74th minute.

Substitute, Thomas Verhaar came off the bench to claim a consolation for Alex Pastoor’s side with four minutes left to play before Elia capped off a commanding display by the hosts – adding the home side’s sixth of the afternoon with a low drive from the left hand side of the area after being teed up by Miquel Nelom.

Feyenoord’s victory meant that the pressure was on Ajax who played host to Groningen at the Amsterdam ArenA in the final match of the weekend.

Colombian centre half, Davinson Sanchez got the hosts off to the perfect start – heading home an in-swinging Lasse Schone corner from point blank range with just nine minutes on the clock.

However, the home side, who make the relatively short trip to face Standard Liege in the UEFA Europa League on Thursday evening having already assured themselves not only of progression to the latter stages of the competition but also of top spot in Group G, found a second goal hard to come by and very nearly found themselves pegged back when a Yoell van Nieff free kick almost caught out an out of position Andre Onana – the Cameroon international pawing the ball onto his left hand upright seven minutes into the second half.

This near miss served as a timely wake-up call for Peter Bosz’s side who came into this encounter unbeaten in their last 18 matches in all competitions and normal service was resumed three minutes later as Amin Younes cut inside Hans Hateboer and rattled Sergio Padt’s crossbar.

The German’s miss galvanised the home side and, in the 71st minute, the returning Anwar El Ghazi was adjudged by referee, Serdar Gozubuyuk to have been unlawfully restrained in the area by Albert Rusnak – the referee pointing to the spot from which Hakim Ziyech doubled the host’s advantage.

Ziyech could and probably should have made it three when Gozubuyuk pointed to the spot for a second time eight minutes later having adjudged that Etienne Reijnen had held back Nick Viergever in the box. However, the Moroccan international this time saw his spot kick saved by Padt who then denied Donny van de Beek as the 19-year-old attempted to put away the rebound.

Despite Padt’s heroics, the victory saw de Godenzonen join league leaders, Feyenoord on 36 points after fifteen rounds of action with their Rotterdam rivals remaining atop the Eredivisie standings by virtue of goal difference while PSV Eindhoven sit six points adrift in third.