Sandwiched in between continental and domestic cup commitments, the tenth round of Eredivisie action got underway at the tiny Stadion Woudestein where out of form, Excelsior played host to PEC Zwolle who, following a wretched opening to the campaign, arrived in Rotterdam having taken four points from the last six.

In contrast, Mitchell van der Gaag’s men came into this meeting having lost their last three league matches in a row despite beginning the campaign in encouraging fashion – winning three of their opening five games of the season.

The Excelsior coach may well have eyed a much needed victory ahead of this encounter, however, it was Ron Jans’ side who continued their recent resurgence by taking all three points – Ajax loanee, Queensy Menig opening the scoring three minutes after the half time interval before fellow loan star, Django Warmerdam rounded off a superb individual display by adding the visitor’s second of the night to seal Zwolle’s first away win in the league this season with two minutes left to play.

Saturday’s Eredivisie action got underway at De Adelaarshorst where Go Ahead Eagles renewed hostilities with local rivals, FC Twente in the Overijsselse derby.

Twente coach, Rene Hake had clearly highlighted the host’s susceptibility to the through ball ahead of this encounter as his side continuously exposed the Eagles’ central defensive partnership of Sander Fischer and Xandro Schenk in this fashion throughout the first period and this was to pay dividends a minute before the half time whistle – Turk, Enes Unal – another man on loan from the blue half of Manchester, shrugging off the attentions of home skipper, Sander Duits just outside the area before slipping in the third of the visitor’s Manchester City loanees, Yaw Yeboah whose shot was only partly stopped by Eagles’ ‘keeper, Theo Zwarthoed before trickling over the line.

The home side came out firing in the second stanza, but try as they might Hans de Koning’s men failed to trouble visiting ‘keeper and former Eagles’ glovesman, Nick Marsman.

Instead it was the away side who threatened to add to their lead when Celina hit the post for the second time with eleven minutes remaining.

In the end, the visitors had to wait until a minute from time to find their second – hitting the hosts on the break with the Eagles’ rear guard managing to block Unal’s initial effort from the edge of the area before the rebound fell to Celina whose well placed finish eventually put the game to bed.

Yet this wasn’t the end of the drama – Eagles’ substitute, Jarchinio Antonia being given a straight red card by referee, Martin van den Kerkof for a reckless two footed lunge on Stefan Thesker deep into added time.

Following a dismal trip to Munich in the UEFA Champions League on Wednesday evening, PSV Eindhoven returned to the Philips Stadion looking for some home comforts when they played host to Sparta Rotterdam on Saturday evening.

However, Phillip Cocu’s men have uncharacteristically struggled in Eindhoven this season – taking just five points from four league games and scoring just two goals in the process. Add to that the fact that the defending champions came into this game trailing leaders, Feyenoord by nine points while being without a win in their last four games in all competitions all contributed to a growing air of desperation which was only dispelled in the 77th minute when an incisive through ball from Luuk de Jong found Bart Ramselaar who slotted the ball past an onrushing Roy Kortsmit to seal a much needed three points for the host’s with what proved ultimately to be the only goal of the game.

Elsewhere, bottom of the table Roda JC played host to an ADO Den Haag side who arrived in Kerkrade having lost their last five Eredivisie matches on the bounce.

Despite winning their opening three games of the season, ADO’s recent poor form has heaped pressure on coach, Zeljko Petrovic who would have been relieved when Edouard Duplan put the visitors ahead eight minutes before the interval.

However, having finally recorded their first win of the campaign against Excelsior last time out, Yannis Anastasiou’s men showed that new found resilience once more as the referee’s watch ticked towards full time – Mitchel Paulissen grabbing an equaliser for the hosts with four minutes left to play to secure a priceless point that saw the Kerkrade-based outfit climb off the foot of the table.

Saturday’s Eredivisie action was concluded in Tilburg where the recent resurgence of FC Utrecht continued at the expense of ten-man, Willem II.

With no win since recording that remarkable upset at the Amsterdam ArenA on 20th August, Erwin van de Looi’s men were hoping to record a much needed second win of the season against a Utrecht side who, despite a poor start to season, arrived at the Koning Willem II Stadion with three wins from their last four matches in all competitions.

However, things got off to the worst possible start for the hosts – Spanish marksman, Fran Sol being shown a straight red card by referee, Reinhold Wiedemeijer just after the half hour mark.

Despite being reduced to ten men, the hosts very nearly managed to escape with what would have been their fifth draw of the season had Sebastien Haller not intervened to snatch all three points for the visitors a minute into added time.

Henk Fraser’s men arrived in Nijmegen having taken four points from the last six while Peter Hyballa’s side came into this encounter having lost three of their last five league matches and it was this in-form visitors who came out of the blocks the quickest – Former NEC player, Navarone Foor giving the Arnhem outfit the lead seven minutes before the break.

However, just when the visitors might have started to think that all three points were in the bag, home centre half, Dario Dumic popped up to earn the hosts a share of the spoils with two minutes left to play. 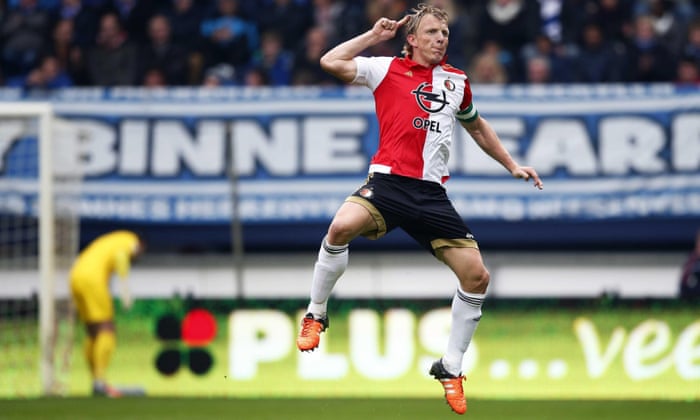 With five points separating hosts, Feyenoord from second placed, Ajax, the first Klassieker of the campaign took on added significance when the two fierce rivals locked horns at De Kuip on Sunday.

With both sides fresh from encouraging results in their respective UEFA Europa League assignments on Thursday evening, it was Giovanni van Bronckhorst’s men who looked the more likely to break the deadlock during the early exchanges – Bilal Basacikoglu catching Daley Sinkgraven ball watching only to be denied one-on-one by Andre Onana twelve minutes in.

The hosts continued to carve out goal-scoring opportunities throughout the first period, the best of which came just four minutes before the interval when a Jan-Arie van der Heijden header found his central defensive partner, Eric Botteghin unmarked inside the visitor’s box, however, the man whose strike sunk PSV at the Philips Stadion earlier in the season couldn’t repeat the feat here – blazing the ball over the bar from point blank range.

Ajax coach, Peter Bosz, who won the Eredivisie as a Feyenoord player in 1993, would have no doubt been concerned with what he had seen in the first half. However, against the run of play, it was the away side who hit the front ten minutes into the second period – an incisive through ball from Hakim Ziyech finding 19-year-old forward, Kasper Dolberg who turned ex-Ajax centre half, van der Heijden inside out before lifting the ball over Feyenoord stopper, Brad Jones to silence the home crowd.

However, just when it looked as though Feyenoord’s remarkable unbeaten start to the league campaign was about to come to an end, inspirational skipper, Dirk Kuyt was on hand to connect with a pinpoint left wing cross from substitute, Eljero Elia – burying a diving header from just outside the visitor’s box to salvage what could ultimately prove to be a crucial point for the host’s title aspirations.

Having slumped to the foot of the table following Roda’s point against ADO Den Haag on Saturday evening, Groningen knew nothing less than a positive result would be good enough when they played host to AZ Alkmaar on Sunday afternoon.

Ernest Faber’s side came into this encounter having lost their last two league matches on the bounce while John van den Brom’s men arrived at the Noordlease Stadion on the back of yet another miserable night in Europe – losing by the odd goal in three at the hands of Maccabi Tel Aviv on Thursday evening.

Despite their dire form in continental competition this term,  AZ hadn’t lost a league match since coming up short against reigning champions PSV at the Philips Stadion on 14th August, so it came as a shock when their struggling hosts came away with all three points here – hitting the front through an 18th minute strike by Bryan Linssen which was then doubled by the 26-year-old’s strike partner, Tom van Weert in the second minute of added time at the end of the first half to lift the home side out of the bottom three.

The tenth round of action was concluded at the Abe Lenstra Stadion where in-form, Heerenveen eventually saw off struggling Heracles.

Jurgen Streppel’s men, who came into this encounter unbeaten in their last seven matches in all competitions, hit the front in the 20th minute through Belgian defender, Stefano Marzo but were pegged back when the visitors levelled the scores through Brandley Kuwas five minutes before the break.

However, a second half strike from Swedish marksman, Sam Larsson in the 66th minute restored the host’s advantage before 20-year-old defender, Jeremiah St. Juste added a third twelve minutes before the end to edge Heerenveen back into the top three at the expense of reigning champions, PSV Eindhoven.