A single strike from Feyenoord playmaker, Tonny Vilhena saw the Rotterdam giants record a memorable victory over a poor Manchester United side in Group A of the UEFA Europa League on Thursday evening.

Despite the fact that, due to previous issues regarding crowd trouble during their last UEFA Europa League campaign and in particular over the two legged knock-out tie with Roma in February 2015, Feyenoord were forced to reduce the capacity of their imposing home, employ considerably more stewards and erect a 10 metre high catch net around the playing surface, little could dampen the raucous atmosphere generated for the visit of one of the world’s biggest clubs to Rotterdam – evoking memories of Feyenoord’s glorious past when the continent’s biggest and best were annual visitors to De Kuip.

Despite their illustrious history, the UEFA Europa League (or the UEFA Cup as it was previously known) is one trophy Manchester United have never won – something their hosts have on two occasions, with their most recent triumph in the competition coming under Bert van Marwijk in 2002.

Yet, any thought of winning the competition for Jose Mourinho’s men was most definitely put on the back burner – the Manchester United coach opting to rest a slew of first choice players for the game in Rotterdam, having previously stated an intention of operating two separate teams in an effort to balance the rigors of domestic and continental competition during the first half of the campaign.

Being able to rotate a squad and yet field a side that included names such as Juan Mata, Paul Pogba and Marcus Rashford was a luxury that Feyenoord coach, Giovanni Van Bronckhorst couldn’t afford – the home side fielding ten of the eleven that dispatched ADO Den Haag at the weekend to maintain Feyenoord’s 100% start to the Eredivisie season as Terence Kongolo returned at the expense of Lucas Woudenberg.

By contrast, the visitors came into the tie off the back of a disappointing home defeat at the hands of their cross-city rivals and had a point to prove to their new manager – who won the competition as coach of Porto in 2003.

But it was the home side who came out of the blocks first – Steven Berghuis testing the handling of United ‘keeper, David de Gea from the edge of the area in the 11th minute before Tonny Vilhena attempted a speculator from similar range on the quarter hour. The visitors replied by troubling de Gea’s opposite number, Brad Jones with a tame Paul Pogba free kick a minute later.

Despite mounting pressure from the hosts, it was the visitors who carved out the best chance of the half when Matteo Darmian broke free down the left and squared for Anthony Martial who skewed a right footed effort from the edge of the area inches wide of Jones’ left hand post with 24 minutes on the clock.

A game of cat and mouse ensued as the second half began – both sides exchanging long range efforts that only served to trouble the ten foot high catch nets encircling the playing surface..

Any suggestion that Mourinho was content with the situation was dispelled when the United boss made a triple change just after the hour – introducing Ibrahimovic, Memphis and Young in the hope of taking all three points back to Manchester.

However, it was a Feyenoord substitute that would fashion the first effort to pose any real danger in the second stanza – Bilal Basacikoglu getting free down the right and firing a low drive that had de Gea scurrying to cover his left hand post with 73 minutes gone.

Having replaced Watford loanee, Steven Berghuis – who had lost the early spark that had driven the home side forward during the first period – the 21-year-old took it upon himself to reignite a contest whose embers had previously begun to flicker and fade. 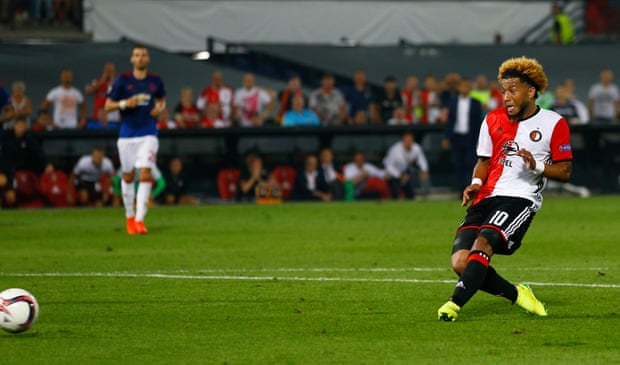 With eleven minutes remaining, Basacikoglu again found time and space down the right and played in Nicolai Jorgensen who broke the United offside trap and squared for Vilhena who side-footed the ball past de Gea from just inside the area to give the Rotterdam giants a lead their first half play had merited.

Rocked by the goal, the visitors continued to huff and puff thereafter but their star-studded line up ultimately fashioned little to trouble Feyenoord’s Australian stopper, Jones – an Ibrahimovic free kick from just outside the area which was well held by the Feyenoord glovesman as the game entered added time being the best the men from Manchester could muster as Feyenoord added another chapter to their illustrious history in European club competition while in the process maintaining their 100% start to the season with a top of the table clash with PSV in Eindhoven next up for the league leaders on Sunday afternoon.

Man of the Match: Eric Botteghin