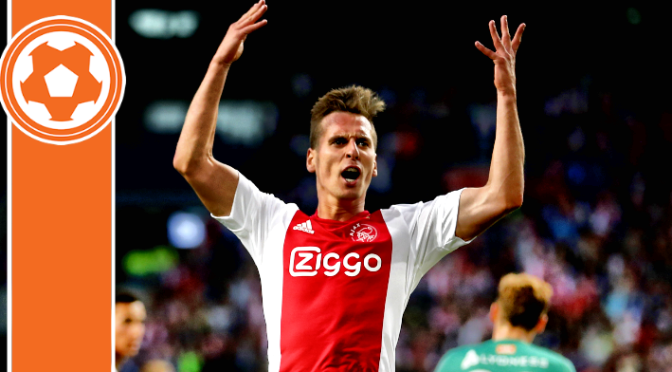 In his debut piece, Ethan Gore looks at Ajax’s Polish striker Arek Milik and ponders whether or not he could have an impact for the Amsterdam giants this season…

Milik had been on loan from Bundesliga side Bayer Leverkusen in the 2014/15 season but Ajax had a clause in the loan deal that allowed them to purchase the striker permanently for €2.5m at any time during the loan deal. On 1st April, the deal was confirmed and Ajax had signed Milik permanently and it was revealed he would take the number nine shirt for the new season, replacing Kolbeinn Sigthorsson who had previously wore it.

Milik’s first season for Ajax was a huge success – hence, why they wished for his permanent signature. The 21-year-old scored 23 goals in total in 33 appearances for Ajax – 11 in the Eredivisie – making him an instant fan-favourite. He has the capability of replicating his form from last season once again, and with the players around him such as Davy Klaassen, Anwar El Ghazi, Riechedly Bazoer and Lasse Schone – he’ll have no problem with delivery. Milik has already scored one so far this season in the Champions League, however, unfortunately for Ajax they are out of the competition after being defeated by Rapid Wien over two legs.

Milik’s got a great eye for goal and has proved his ability up-top, he’s very clinical and when given the opportunity, he takes it very well. His hold-up play and ability to shoot from distance make him the perfect, all-rounded striker along with his work-rate on and off the ball. Milik has the perfect pedigree for a striker and definitely has the ability to perform to high levels yet again this season.

If he stays fit for the whole season then he will undoubtedly play a huge part in Ajax’s title charge but he cannot do it alone as other players will obviously have to contribute. Although the young Pole is the key-man upfront and should he contribute the goals then he will be accredited as one of the huge factors for a potential title win.