The opening weekend of the Dutch league season was severely affected by police strike action, and due to this, the nine Eredivisie games are to be spread across the majority of the week. Will Burns is on hand to give you a rundown of all the action from the first four matches.

In an amazing contrast on Sunday morning, after watching the European performances of the past fortnight, the disappointing Ajax travelled to Alkmaar to face the promising AZ and the tables were turned. The Amsterdammers left the AFAS Stadion with a 3-0 win after an Anwar El Ghazi brace followed by Nemanja Gudelj notching against the club he left in the summer.

Ajax scored all three inside the first-half with El Ghazi opening the scoring on 14 minutes with a sublime effort after some quick thinking from Mitchell Dijks. A quickly took free-kick allowed El Ghazi some space some 30 yards out and El Ghazi, after meeting his hero in the summer, hit a Ronaldo-like dipping shot giving AZ stopper Sergio Rochet no chance of saving.

It was a close affair with AZ hitman Vincent Janssen look the most likely to threaten for the John van der Brom’s side but it was his goalkeeper Rochet that handed the game to Frank de Boer’s outfit. El Ghazi got his head on the end of a whipping Gudelj free-kick and Rochet, although the Uruguayan stopped the effort, he failed to control and ended up fumbling the ball into the net to make it 2-0.

The third and final goal by Gudelj was also another that Rochet would not like to watch in the highlights that evening, after parrying the Serbian’s long range effort into the top corner of his goal.

AZ coach Van der Brom stated he felt sorry for his supporters that sold out the stadium for this match, but will look to make amends next weekend in Rotterdam against Excelsior. For De Boer, his side showed no Euro hangover as they look to challenge to regain the Eredivisie crown taken from them by PSV last season.

In the opening game of the season, Roda JC made a return to the Eredivisie with a hefty 3-1 win over Heracles even though the Almelo outfit went ahead after the half-hour mark through Iliass Bel Hassani. Although, the lead did not last long as four minutes later, Edwin Gyasi managed to weave his through to equalise. Early in the second half, Roda took the advantage with Tom van Hyfte scrambling the ball home after Gyasi’s header hit the post. Heracles pressed to level the game up but in the final moments, Hicham Faik smashed home a long range effort to cement all three points. 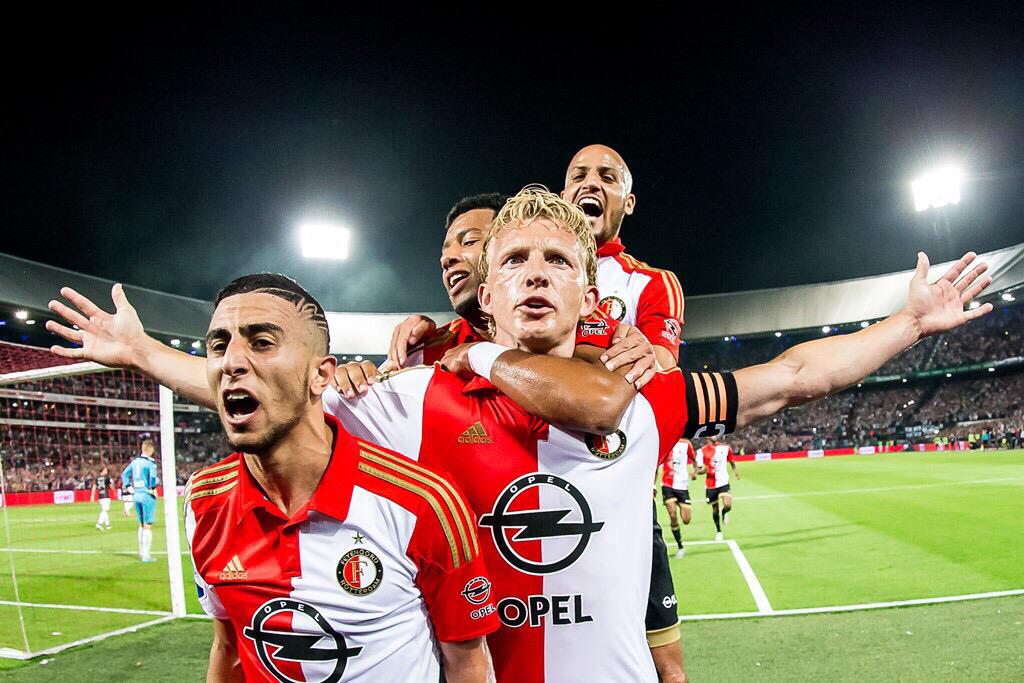 Dirk Kuyt also made his return to the Dutch top flight leading Feyenoord to a 3-2 victory over FC Utrecht at De Kuip on Saturday evening. Even though the Rotterdammers were reduced to ten-man after young right-back Rick Karsdorp was harshly dismissed by referee Kevin Blom early in the second-half. Turkish striker Colin-Kazim Richards gave Giovanni van Bronckhorst a great start to his managerial career heading home debutant Marko Vejinovic’s free-kick to make it 1-0.

After Karsdorp was shown his marching orders for his hard tackle on Christian Kum, Utrecht levelled the scoring through French striker Sébastien Haller, whom signed permanently from Auxerre last month on 75 minutes, however the score was only 1-1 for a few moments.

The equaliser fired up Van Bronckhorst’s side and they regained the lead two minutes later when substitute Tonny Vilhena, rumoured to be leaving the club, was at the back post to knock home Karim El-Ahmadi’s cross. With the De Kuip faithful in full force, Feyenoord pressed to kill the game off and Bilal Başaçıkoğlu was tripped in the area by Yannick Cortie, and Kuyt marked his return with a successful penalty conversion. Haller nabbed an injury-time consolation through a penalty kick of his own but it was Feyenoord that ended as the victors by three goals to two.

Looking to build on a successful campaign last season, Willem II boss Jurgen Streppel lead his team out full of confidence on Sunday afternoon against Peter Bosz’ Vitesse in a game that ended tied at a goal apiece. The Tilburg side took the lead just after the hour mark through new recruit Erik Falkenburg before Ukrainian midfielder Denis Oliynyk.

A further five contests will make up week one of the Eredivisie to take place Tuesday and Wednesday this week… if the police do not decide on another strike?!

Check back later this week for ‘Part Two’ of the Eredivisie report.