In September 2009, a vital World Cup qualifier between The Netherlands and Scotland was locked at 0-0 with a little over 15 minutes of the match left. At this point, Arjen Robben, the Netherlands star man, and most dangerous player on the night, was somewhat surprisingly replaced by a largely unknown 21 year old, his name? Eljero Elia. Elia went on to expertly round the keeper and grab an 82nd minute winner for the Dutch, maintaining their 100% record. Since then, Elia’s career has had its ups and downs, but he is now back in the spotlight after his move to Premier League side Southampton. So, what is the story so far, of the player once dubbed The Netherlands golden boy? Fin Crebolder tells all…

Lets go back to 2004, where Elia was a 17 year old prodigy playing at ADO Den Haag. He had been at ADO since 1996, although he spend did two years at Ajax from 2000 to 2002, before returning to ADO Den Haag. He had excelled in the youth team for many years, and made his long awaited debut in 2004 against Groningen. He went on to make 4 appearances for the club that season, scoring his first goal for the club in a 2-1 win over AZ Alkmaar. After this breakthrough season, he established himself as a consistent starter for the club, making 56 appearances, scoring 8 goals and getting 4 assists. At the end of the 2006/07 season, it became apparent that Elia was to leave the club. He had conflicts with the coach, Lex Schoenmaker, and also had no intention of playing in the Eerste Divisie (ADO had been relegated). Ajax showed in interest in him, but the deal involved him being loaned back to ADO Den Haag for a season, which he had no intention of doing.

Elia joined FC Twente on July the 1st, 2007, for a fee of around €180,000. He made his debut in a 2-2 draw against Utrecht in August, but didn’t score his first goal until February, in a 2-1 win over Heracles Almelo. He made 36 appearances that season, scoring two goals and assisting two. The 2008/09 season proved to be a pivotal one in Elia’s career, largely due to the appointment of Steve McClaren. McClaren managed to create a side capable of winning the Eredivisie title, and Elia was pivotal to the sides success. He scored 14 goals in all competitions including 9 in the league, and also got 10 assists, a vast improvement on his previous season. Over the course of the season, Elia also made his Champions League debut and scored his first European goal in the Europa League against Manchester City. In the January of the season, Ajax stated their interest in him and had two offers rejected. Elia ended the speculation by signing a contract keeping him at the club until 2013. At the end of the season, Elia was named Dutch Football Talent of the Year.

Despite signing a new contract, Elia stated that he wanted to leave the club at the end of the season. After his excellent season, many clubs around Europe showed interest in him, and on the 5th of July 2009, Hamburg signed him for €8.5 Million. He made his debut a month later, coming on as a substitute in the opening game of the season against Freiburg, and scored his first goal for the club two weeks later, in a 4-2 win over Wolfsburg. He made 35 appearances over the course of the season, scoring six and creating nine goals. This impressive debut season in Germany earned him a place in The Netherlands 2010 World Cup squad. He made a large impact in South Africa, coming off the bench to good effect in six of seven games in the Dutch run to the final, including a 50 minute appearance in the final, where The Netherlands lost 1-0 to Spain in the dying minutes of extra time. However, this season proved to be the peak of Elia’s career so far, as his career began to take a downhill trajectory. In his second season at Hamburg, Elia was often rotated, playing a full 90 minutes only nine times over the course of the season. This left him considering his options, and his future at the club looked to be in further jeopardy when he claimed to the press that the club’s style of play didn’t suit him, and also said that the club didn’t look after him when he was sidelined through injury. He was subsequently fined for his comments, and it appeared inevitable that he would leave the club sooner or later.

On the 31st of August 2011, four games into his third season at Hamburg, Elia signed for Juventus for a fee of €9 Million. This proved to be Elia’s worst career move by a long way, as he struggled to make any impact at all in what was an incredible season for “The Old Lady”. Due to Conte’s preference to play a 3-5-2 formation with wings backs, Elia very rarely found a place in the team, and made just five appearances all season, starting just one game, despite the fact that he didn’t have any injuries or suspensions throughout. Due to this catastrophic season for him, Elia missed out on a spot in The Netherlands Euro 2012 squad.

In an attempt to revive his now stalled career, Elia requested a transfer on the 11th of June 2012, and returned to the Bundesliga a month later, this time playing for Werder Bremen, who paid €5.5 Million for his services. He struggled in his first seven appearances, and admitted that he was finding it difficult to adapt to the teams style of play. He went on to make 25 appearances in his first season, but only scored one goal, in the DFB-Pokal. He was also suspended by the club after he was caught speeding. Despite a disappointing first season, the club decided against selling him, and he made an encouraging start to the 13/14 season, scoring two goals in  a 3-3 draw with Nuremberg. He also found the back of the net in two consecutive games against Mainz and Hoffenheim in late November. He ended the season with four goals and four assists, and became a fan favourite due to his exciting and eccentric style. Elia started the 14/15 campaign in the starting line-up, and got an assist in the opening day fixture. However, illness coupled with a controversial tweet in the build up to the derby against his former club, Hamburg, meant that he was dropped from the first team, and he struggled to cement a spot in the starting lineup after that, largely due to his attitude, along with the impressive form of winger Fin Bartels. 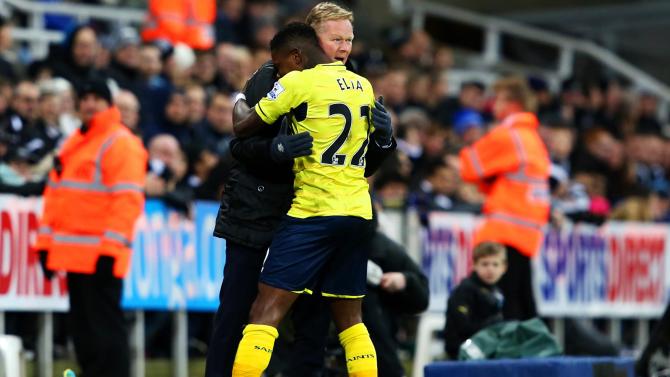 That brings us to present day, where Elia is currently plying his trade at Premier League side Southampton, following Ronald Koeman’s decision to bring him in on loan. Elia has had an impressive start at the club currently 3rd in the league, causing havoc for defences with his pace and trickery, and exciting fans and pundits alike. He scored his first goals for the club when he bagged a brace in a 2-1 brace over Liverpool. Whilst it is evident that Elia will never become the global superstar he once promised to be, at a rising club like Southampton, under the management of his compatriot Koeman, Elia still has time to surpass his previous achievements, and maybe even become a key player for the Oranje once again.