Potential star of the future Daley Sinkgraven grabbed the winner as PSV lost for only the second time this season and both sides have a man sent off writes Ryan O’Grady. 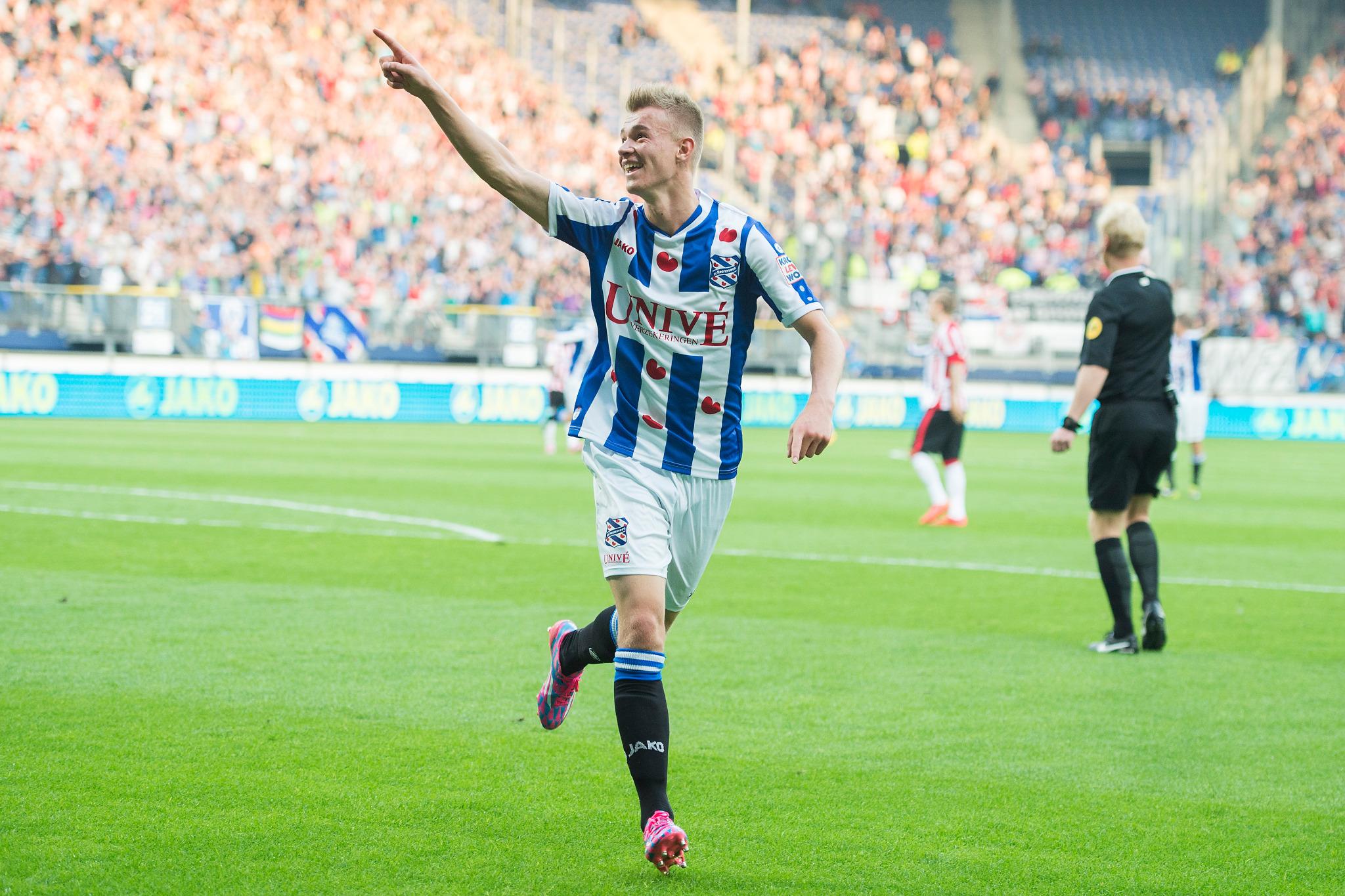 The home side came into this game missing striker Sam Larsson and having lost to Eerste Divisie side Roda JC 2-1 in the cup. Coach Dwight Lodeweges was scathing in his reflection on the game whilst captain Martin de Roon said the six senior players who played in that game had to take responsibility, not the 5 youngsters who were replaced for this game. PSV also brought an injury list with them as Andrés Guardado, Luuk de Jong and star player Memphis Depay were all missing, however PSV did manage to win their midweek cup game against FC Utrecht 2-0.

Despite it being goalless in the first half it was far from boring, the half had 18 attempts on goal and a red card to boot as well. PSV got themselves an early half chance in only the 38th second after Adam Maher just managed to keep the ball in on the sideline before playing a low cross to Jurgen Locadia but the ball bobbled just before the Dutch striker hit it and as a result it went wide of the near post. Heerenveen then took control of the game, pressing high and repeatedly forcing mistakes from PSV players. Their first chance came in the 5th minute when Joey van den Berg had a dangerous shot that looked goal bound but it his teammate, German frontman Mark Uth. They then had another chance only two minutes later when Daley Sinkgraven brilliantly controlled a long ball on his chest before knocking past a defender. Unfortunately he could only muster a weak shot and as a result Jeroen Zoet recovered the ball easily. Despite dominating, Heerenveen’s final ball wasn’t always great and as a result they sometimes struggled to break down the PSV defence. They nearly had a stroke of luck in the 21st minute when Joost van Aken mishit a long range effort and it was going well wide but Uth nearly ran onto it and had he been able to control it then he would’ve been through on goal.

The direction of the first half started to change after that chance with PSV starting to come back into the game. In the 26th minute Luciano Narsingh ran into the box before pulling the ball back for Georginio Wijnaldum who back heeled it to Florian Jozefzoon who hit a low curled effort towards the bottom corner but Kristoffer Nordfeldt in the Heerenveen net managed to change direction at the last second and push it just past the post. Heerenveen did have a couple of chances in the period of PSV dominance, these were both down to Jetro Willems, firstly when the ball was played to Luciano Slagveer on the right wing Willems slipped allowing Slagveer to race clear. Fortunately for Willems, Slagveer tried to square it for Uth rather than shoot himself and Jeffrey Bruma knocked it behind for a corner. Then both Willems and Sinkgraven went for the ball in the 32nd minute but Willems appeared to pull out allowing SInkgraven to cross for Uth who after controlling it with his chest hit a shot on the spin that was well saved by Zoet.

Then came the first of the two sending offs. Jozefzoon was put through and was in on goal when Stefano Marzo appeared to cut across the back of the PSV winger bringing him down. As Marzo was the last man he was sent off but replays showed that Jozefzoon had gone a bit theatrically although the red card was justifiable. Almost immediately afterwards Locadia went down in the box and half-heartedly appealed for a penalty but referee Kevin Blom wasn’t swayed and simply told the young striker to get back on his feet.

PSV threatened early in the second half as well, Adam Maher had a decent chance in the 53rd minute when he hit the side netting from a tight angle. The game swung back in Heerenveen’s favour in the 68th minute when Joshua Brenet was sent off for a challenge on Uth. It initially seemed harsh but replays showed that Brenet clearly had his studs up and caught Uth on his inner thigh after the ball had already gone. This forced Phillip Cocu to bring off striker Jurgen Locadia for defender Santiago Arias. Heerenveen’s pressure finally payed off in the 77th minute after some neat build-up play resulted in a goal for Daley Sinkgraven. Initially Slagveer had the ball just inside PSV’s half. He passed the ball to Uth who immediately gave it back with a lovely first time pass, Slagveer then drew in two PSV defenders creating space for Sinkgraven who he then subsequently passed to. The young Dutchman then appeared to get the ball stuck underneath his feet but then produced a lovely finish into the top corner leaving Zoet with no chance. PSV obviously needed to get back into the game but they were only able to muster up one decent opportunity which fell to Jeffrey Bruma. A shot from Wijnaldum was deflected off Doke Schmidt for a corner and the resulting ball in fell to the feet of Bruma but he could only put his effort over the bar.