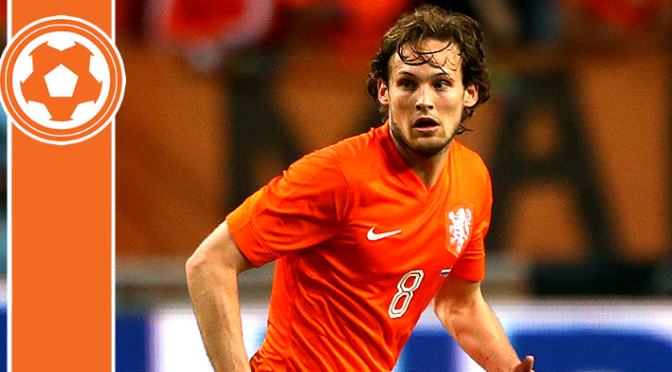 After a few weeks of rumours it is finally a done deal. Daley Blind will make to the move to Manchester United for a number which floats around £14m (around€18m) plus bonuses and a percentage of a future fee if Blind ever leaves United. The versatile Dutch international will be the fifth major signing from Louis van Gaal. Only, what kind of player is Daley Blind? Martijn Hilhorst explains.

When Blind became an official squad member for Ajax in 2008/09, the opinions were divided. Some felt he was not good enough, while others saw the potential in him.  As a young kid, he eventually played a total of five league matches that season and Ajax manager of that time, Martin Jol was not convinced. The following season he was loaned out to FC Groningen where he played left and right full-back and this brought some staggering performances. After a great spell in Groningen, many clubs wanted to loan him, but Blind decided he wanted to stay at Ajax to earn his place in the team. This was a bold move and he emerged successful in the challenge until the winter when he failed to play but then Jol was fired in December 2010. His successor was Frank de Boer.

‘Frankie’ immediately said that Vurnon Anita (now of Newcastle United) was not a left-back, but a defensive midfielder. Daley became the second choice after Urby Emanuelson and six months later , Urby was sold to Serie A giants AC Milan. Therefore, Blind became first choice as a left-back in which he played for a few seasons until the 19th October of 2013.

In an away fixture against FC Twente, he was selected in the defensive midfielder role and with just nine minutes remaining, he provided the assist in a 1-1 draw. After that season (2012/13) he was named Ajax’s ‘Player of the Year’ and the season following even the Eredivisie’s ‘Player of the Season’ but enough of the ‘chit-chat’, what are his qualities and his (minor) flaws?

Daley Blind is known for his versatile way of playing.  For example, during this summer’s World Cup campaign for the Netherlands, coach Louis van Gaal decided to use him as a central defender and left-back which he performed well. He possesses great intelligence and awareness, always turning the right way, knowing when to clear the ball or take a breather and he combines this decision making with key passes during the match. Everyone remembers the ball he floated in for Robin van Persie in the 5-1 hammering of Spain. That is a perfect example of a courageous cross which not a lot of players would have delivered so perfectly. The biggest aspect of his game is his passing.

In the last years couple of years, I haven’t seen a ‘DM’ anywhere in the world (expect for Barcelona’s Sergio Busquets) who has such a brilliant composure on the ball. When your build up play is dreadful, give it to Daley, he will create a brilliant through ball to one of his fellow midfielders or forwards.

Although, he has got a few flaws. He is not a ruthless defensive midfielder like the Premier League may be used to, and he is to slow for the left-back position but bear in mind that Louis van Gaal is the manager! He is able to change the game, making people understand that his philosophy is one to follow. Where many United players are having trouble with adjusting to his 5-3-2 formation, Blind could lead the way. Ajax players are known for their intelligence and technical abilities so he is a perfect fit as a DM.

Agreed, he was named Eredivisie’s ‘Player of the Season’ in the 2013/14, but do not expect a fancy player which will solve everything at Manchester United. You can expect a player who will control the play, dictate the tempo and protect the defence.

The Red Devils will have one easy solution now – just give it to Daley and he will lead United to victory.

2 thoughts on “What can Man Utd fans expect to see from Daley Blind?”