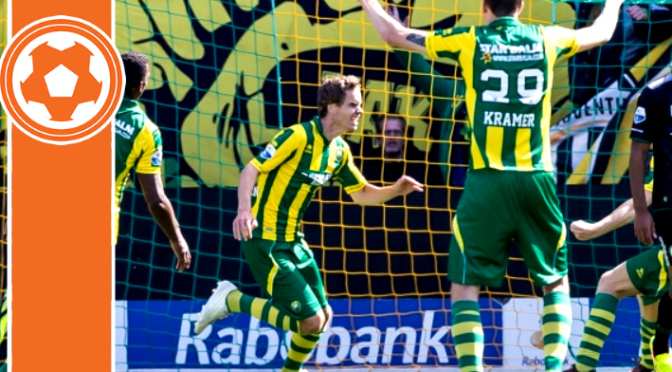 For the 10,000 plus capacity inside the Kyocera Stadion the skies was full of sunshine when some of the country was experiencing heavy rain, and like the weather the result was not disappointing for the Den Haag supporters.

Early on, Groningen looked good with their star man of the season so far Jarchinio Antonia, a summer buy from Go Ahead Eagles, terrifying Aaron Meijers at left-back, and the winger could have put the visitors ahead within the first 15 minutes of the game. Looking lively as always, Antonia collected the ball and easily outpaced Meijers, then continued into the box but in his way of the ball and goal was former Liverpool goalie Martin Hansen. The big Danish keeper rushed out and blocked Antonia’s effort with his feet much to the delight of the crowd and Meijers.

At the other end, ADO may have seen an opening after some good work from striker Mike van Duinen seeing off Eric Botteghin and Tom Hiarlej he placed a perfect ball to Mitchell Schet who disappointedly blazed over from yards out.

The teams went in at half-time goal-less and ADO emerged a house-of-fire and went ahead on 56 minutes with a beautiful goal. New summer signing from FC København, Thomas Kristensen combined well with Kevin Jansen while he ghosted past the Groningen defence to slot the ball past Sergio Padt. Delightful passing to watch which tore apart the visitors’ back four and part of their midfield.

The away side looked to get a goal back immediately but Hansen held firm pulling off double saves on two occasions, first Tjaronn Chery and then substitutes Michael de Leeuw minutes later.

ADO hit two late goals to finish the game off both orchestrated by Ronald Alberg. For the first goal, Alberg lofted a perfect long ball up field into the path of Michiel Kramer. The striker held off the challenge of Johan Kappelhof and after spotting Padt off his line, sent over a first time chip to make it 2-0. Another lovely goal to send the Kyocera Stadion and Henk Fraser on the touchline into raptures. The second goal was created by Alberg’s pinpoint defence-splitting ball that carved Botteghin and Kappelhof up and Kramer finished with ease.

Groningen come down with a earth-shattering thud after looking to be a real roll at the start of the campaign, but a fantastic win for ADO Den Haag after two tough games against Feyenoord and FC Twente. Fraser looks like his side are bringing the great form of last season in this one.