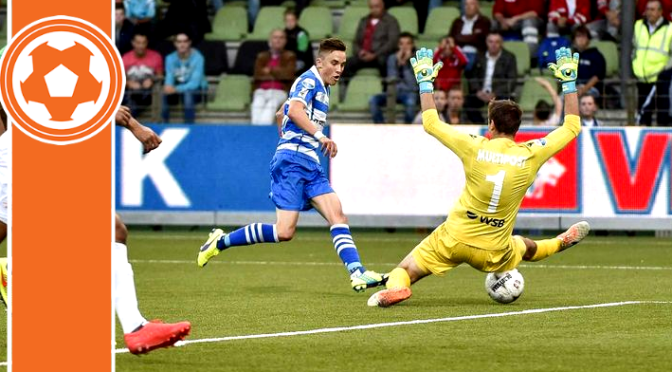 A second-half stoppage time Mustafa Saymak winner gave ten-man PEC Zwolle a great 2-1 triumph away to FC Dordrecht this evening ahead of their first ever European clash against Sparta Prague this Thursday reports Will Burns.

Zwolle started the brighter of the two sides with Stef Nijland, again starting in a lone striker role going close on two occasions early on. However, it was an uneventful first half that saw few opportunities created and those that were, saw some poor finishing and neither keeper had a shot to save until five minutes from the break.

After a good interception from Ben Rienstra, the midfielder spotted young New Zealand winger Ryan Thomas breaking after on the left. Rienstra fed the 19-year-old the ball and Thomas finished by sliding the ball underneath the onrushing Filip Kurto.

The goalscorer went over on his ankle soon after the break and was subsequently subbed off for loan signing Tomas Necid from CSKA Moscow. The imposing 6ft 3 striker joined on Wednesday and looked lively with some good touches and great movement for a big guy.

The Czech forward nearly got himself a goal minutes after coming on, after the energetic Jody Lukoki crossed from the right, but Necid failed to connect with his header and the ball sprayed wide of the goal.

Zwolle’s victory looked in jeopardy with just ten minutes remaining when young referee Jochem Kamphuis produced his first ever red card for Bart van Hintum for a double booking. The second yellow was for a shirt pull on Rihairo Meulens.

Just moments later, the scores were level. Hero of last weekend’s win over Heerenveen, Joris van Overeem floated a ball into the area from the right and after some terrible defending by Zwolle the ball fell awardkly for Mart Lieder. The striker just made contact with his spot that fooled Diederik Boer in goal but his effort bounced off the foot of the far post. Giovanni Korte was on hand to punish the Zwolle defence to poke home the equaliser.

However, Ron Jans’ men would have the last laugh with the winning goal with the last kick of the game deep into stoppage time. From Boer’s goal kick, Nedic pressured the Dordrecht defence and carried the ball forward after the defender missed the headed clearance. Emerging into the area, Necid spotted Mustafa Saymak arriving on the edge of the box. The Czech laid the ball into the Saymak’s path who finished superbly for the win.

Zwolle with their third win in all three games of the season so far, their second in the league, nowprepare for Thursday’s Europa League match against Sparta Prague at the IJsseldelta Stadion.