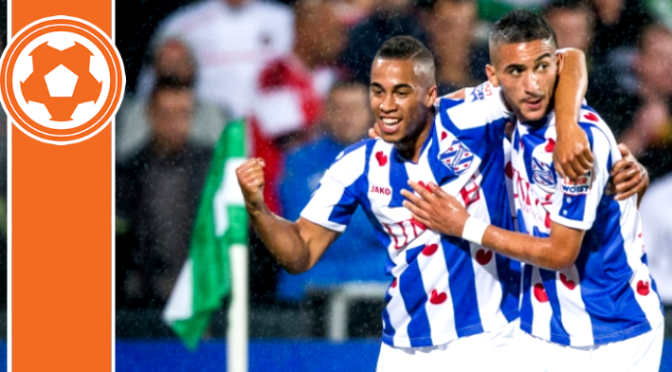 The points were shared at De Kuip, despite Heerenveen having to play the last third of the match with ten men. Feyenoord are still adjusting to life without the stars of last season, but their start has been encouraging.

Despite having differing results on the opening weekend, there was little difference between the sides in the first half, as both sides had chances to take the lead. It was an entertaining start to the match as both sides had a good chance each within the opening ten minutes. Heerenveen forward Luciano Slagveer went on a powerful run through the opposition half, but his show sailed harmlessly wide. Feyenoord then had a chance of their own as the ball was fired across the box to Basacikoglu, who fired wide with a powerful drive.

The match was end to end, but neither side stayed calm in the final third, as they both struggled to create clear cut chances. It’s clear Feyenoord are missing the host of stars that were sold over the summer, while Jordy Clasie didn’t feature against Heerenveen, his future is far from certain.

In the final stages of the opening 45 minutes, the hosts came to life. They started to pass the ball with vigour in the final third and a nice interplay saw Tony Vilhena receive the ball on the edge of the area, his stinging shot was well saved by Nordfeldt. Moments later, Basacikoglu found space to deliver an excellent cross, but the resulting header from Mitchell te Vrede was pushed wide by the Heerenveen stopper. The momentum was building, yet Heerenveen nearly nicked a goal before half time on the break as Van Den Burg’s shot from long range was well stopped by Mulder and Uth could only head the rebound over the bar. Despite their late chance, the away side will have been pleased to make it to the break still level.

Minutes into the second half, powerful play from te Vrede allowed him to turn his marker after he controlled the ball from a throw in. The striker then scuffed his effort wide, however the strength showed was encouraging. Feyenoord continued to attack with purpose as Immers couldn’t control his effort goalwards after an excellent cross into the box from Boetius.

Heerenveen almost scored in the 60th minute after clever play from Slagveer to skip inside and hit a left footed shoot low past Mulder but the post came to the home side’s rescue. Then Van Den Burg received his second booking for a silly foul in the middle of the pitch, meaning Feyenoord were playing ten men for the second Eredivisie match in a row.

Yet it was the team with the numerical disadvantage which opened the scoring as Hakim Ziyech curled a free kick over the wall and past Mulder, who will have been disappointed to have been beaten by that strike. The home side quickly equalised after Schaken beat his man on the right wing, and put in a great cross, which was headed goalwards by captain Lex Immers, but it flicked off Te Vrede on the way in.

Feyenoord were in control of the game for the final half an hour, having lots of possession in the final third, Nordfeldt was forced into a save from Manu’s shot after the ball fell to the Feyenoord player in the box. Although Feyenoord continued to push, they couldn’t make their one man advantage count, unlike in their previous match, with Te Vrede coming closest to a winner after Nordfeldt saved smartly from his header.

Although they didn’t win, Feyenoord will be pleased with their four points from two games as the team starts to settle without the players who starred last season, with Mitchell te Vrede being a particular highlight, he looks like he could be set for a great season. Heerenveen will be relieved they hung on for a point in the end.