Sunday sees the final four games of the first week of action as the big guns PSV, Ajax, Feyenoord and Vitesse begin their campaign. Will Burns to provide a preview and some betting tips – good luck. 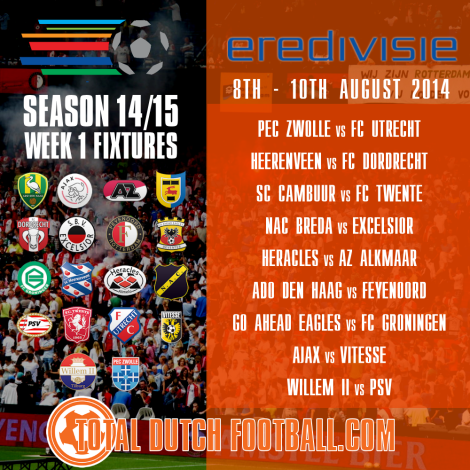 The very first Dutch game of the four-year Sky Sports deal will be a fierce battle between ADO Den Haag and Feyenoord.

This will be a tough test for Feyenoord, after the midweek exploits in Turkey, defeated by Beşiktaş 3-1 courtesy of a Demba Ba hat-trick. With a squad depleted after losing their leading scorer for the past two seasons and three of their representatives at this summer’s World Cup, Fred Rutten has a major job on his hands if he wishes to try steering Feyenoord to a title challenge this term. Signing Heerenveen winger Bilal Basacikoglu was a good start and the thought of Jean-Paul Boëtius on opposite wings is a mouth-watering prospect. Problem is the lack of strikers to cross the ball to. Apart from an uninspiring Mitchell te Vrede in the lone striker role, Elvis Manu, scorer in midweek, will be in Rutten’s mind and may get a start.

ADO manager Henk Fraser has been impressive since taking over midway through last season. Boasting an undefeated record of 11 of their last 12 matches, they head into Sunday’s game with confidence and some good new faces. Xander Houtkoop had a fantastic season at Go Ahead Eagles last year. Twenty four-year-old goalkeeper Martin Hansen, a former Liverpool youth excelled in the Danish league over last two season at Viborg FF and FC Nordsjælland. Finally, experienced Danish international midfielder Thomas Kristensen arrives after six success filled seasons at FC København. All three are set to start, however, the biggest news of the summer for ADO is that young highly-rated striker Mike van Duinen is still at the club.

With the tiredness and exhaustion from the midweek travel and mood affecting the result of the game, I cannot see Feyenoord walking out of the Kyocera Stadion with a win. I feel ADO will be set-up a fresher team and ready to exploit any weakness they find. Rutten will be hoping to get the season going but I feel Fraser’s side will hold the Rotterdammers to a draw.

After a disappointing European adventure in the summer, Groningen began their league campaign in Deventer on Sunday afternoon away to Go Ahead Eagles.

A load of players to look out for in this game, Eagles have borrowed a couple from Ajax and both should be on the teamsheet. Young goalkeeper Mickey van der Hart started 27 games in the Eerste Divisie last year for Jong Ajax. Exciting winger Lesly de Sa also appeared for Jong Ajax last term, scoring seven goals in 17 starts. Another definite starter should be left-back Giliano Wijnaldum, brother of Georginio, who signed from Sunday’s opponents FC Groningen. Another two, who could also feature is striker Alex Schalk, signed on a free from NAC Breda and midfielder Peter van Ooijen who arrived from PSV Eindhoven.

Edwin van der Looi brought many exciting reinforcements into Groningen this summer. Danny Hoesen signed on a permanent deal from Ajax, as Richairo Zivkovic went to other way. Signing from Go Ahead, Jarchinio Antonia should start against his former club and possibly haunt them with his right-wing attacks. Big defender Martijn van der Laan arrived from Cambuur and goalkeeper Sergio Padt came from Jupiler Pro side AA Gent as Marco Bizot went the opposite direction to Belgium. All of these players will add some great depth to an already strong squad.

I predict this match could provide a lot of goals and could be the game of the round. Adelaarshorst is a challenging venue for any team but Groningen should have sufficient quality to be able to hold off their opponents to at least claim a point in this one.

Defending champions Ajax will be out for blood against Vitesse on Sunday after spending all week licking their wounds from last weekend’s Johan Cruijff Schaal defeat in their own backyard to PEC Zwolle.

Undefeated in the last 22 games in the league, Ajax will be vying to keep the run going and get off to a good start on Sunday. World Cup trio, Jasper Cillessen, Joël Veltman and Daley Blind have returned to full training this week after being given extended leave once their involvement in Brazil concluded. It is very unlikely that they will be named in the starting line-up against Vitesse, so in their absence Kenneth Vermeer, Mike van der Hoorn and summer signing from AZ, Nick Viergever should stand in. Elsewhere, Frank de Boer could hand a debut to young Polish striker Arkadiusz Milik, who was loaned from Bundesliga side Bayer Leverkusen last month.

Peter Bosz will be looking for a change in fortune as his side have lost their last four away matches in the league, but he could not have asked for a harder first game than a trip to the Amsterdam ArenA. Preparations for the new season as usual, have seen Chelsea reserve players have made the switch from Stamford Bridge for the forthcoming season. Burkina Faso international midfielder Bertrand Traoré and Brazilian full-back Wallace have made the move over to Arnhem. Vitesse has strengthened their attacking options bringing in striker Abiola Dauda, who has a great goalscoring record at both Kalmar (Sweden) and Red Star Belgrade (Serbia).

One player who may lead the team to greatness this year has not been mentioned by many pundits but insiders have told me he will make a major impact in the Eredivisie. Arriving early in the window was Denys Oliynyk from Dnipro on a two-year deal. The Ukrainian international was once considered to be one of the most talented players of his generation, however, he has only played 13 games in the past two seasons. It will be interesting to see what happens with this player if he makes the first team.

Ajax will be looking to explode out of the blocks in front of their own crowd to make amends from last weekend’s disappointment; however Vitesse will be prepared for this. Without their World Cup stars, I’m predicting Ajax will find this game a struggle and the draw is my recommended bet.

PSV Eindhoven was in Austria this past Thursday to advance to the next round of the Europa League qualifiers, while Willem II would have been resting up preparing for this game, in their return to the Eredivisie.

PSV enter this game with a fantastic head-to-head record, having won their last 17 matches against Willem II in all competitions and I cannot see the streak being broken. Philip Cocu’s men should get the season underway with a hefty victory over Jurgen Streppel’s side. New striker Luuk de Jong has already notched this year in the Europa League and with most wanted Memphis Depay returning from a fantastic World Cup ready to fire PSV to a title challenge. I fail to see the likes of Jordan Peters and Tim Cornelisse keeping them at bay.

Our best bet will be PSV -1 which means we need the Eindhoven side to win by two clear goals to win the bet.