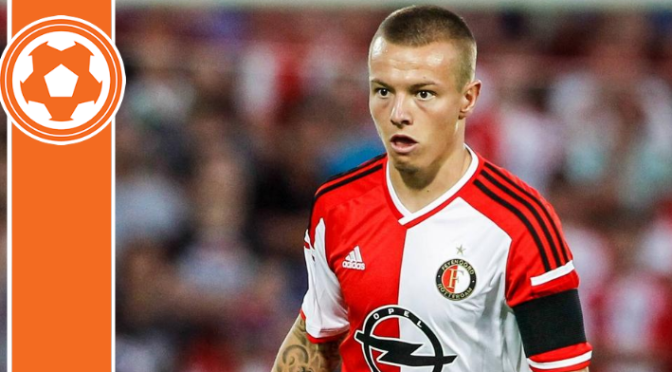 After having such a good World Cup it was inevitable that Jordy Clasie would attract interest this summer. However throughout this summer window Feyenoord have stood firm in their belief that he will not be sold. Feyenoord’s Sporting Director Martin van Geel has even been quoted as saying “we have no intention of selling him.” But in the last few days Clasie’s agent Wessel Weezenburg has been quoted as saying “Of course Clasie does not have to leave Feyenoord. But he is ready for departure” which seems to imply that he probably won’t hand in a transfer request but if a big club were to come in with an agreeable personal terms then he would probably accept the offer.

Clasie has been linked with a whole host of clubs; there have been suggestions that both Louis van Gaal and Ronald Koeman, now of Manchester United and Southampton respectively want to be reunited with a player they have already managed. He has also been linked with other European giants such as FC Porto and Fiorentina. After having such a standout World Cup, Clasie’s stock has certainly risen as well as his price tag which is likely to be around the £15 million mark if not more.

While there are others in the Feyenoord team that played well last season, Terence Kongolo and Jean-Paul Boëtius to name a couple, Clasie is the last of the stalwarts of the team that helped Feyenoord to second in the league last season. Stefan de Vrij, Daryl Janmaat, Bruno Martins Indi and Graziano Pelle have all already left and it is unlikely that Feyenoord can repeat the achievements of last season.

Born in Haarlem just outside Amsterdam, Clasie joined the Feyenoord youth set up age 9. He spent ten years in the youth set up before being sent out on loan to Excelsior for the 2010/11 season. He actually made his professional debut for Excelsior against Feyenoord in the Rotterdam derby. The season after was his breakthrough for Feyenoord; he made his debut in a friendly game against Malaga. Clasie quickly became a hit with the Feyenoord fans due to his tenacity and good play on the pitch. One aspect of his game that he could improve is his goal scoring, because while he is certainly not an out and out attacker, six goals in 98 appearances for Feyenoord isn’t great.

Clasie is already an established member of the Oranje. Having played in the U18, U19 and U21 age groups it was only a matter of time before he was called up to the full squad. He was on the stand-by list for Euro 2012 and played in every game for the Dutch at the 2014 World Cup, both starting and from the bench.

2 thoughts on “Clasie is ready for Feyenoord departure”